After withdrawing, the United States and NATO aim to rely on Afghan military and police forces, to maintain security.

Foreign troops under NATO command will withdraw from Afghanistan in coordination with a US pullout by September 11, Washington's top diplomat has said, after Germany said it would match American plans to leave after two decades of war.

Around 7,000 non-US forces from mainly NATO countries, also from Australia, New Zealand and Georgia, outnumber the 2,500 US troops in Afghanistan, but still rely on US air support, planning and leadership for their training mission.

US Secretary of State Antony Blinken said in Brussels that it was time for NATO allies to make good on their mantra that allies went into Afghanistan together and would leave together.

"I am here to work closely with our allies, with the (NATO) secretary general, on the principle that we have established from the start: In together, adapt together and out together," Blinken said in a televised statement at NATO headquarters.

READ MORE: US plans to withdraw all troops from Afghanistan by September 11

An integral part of NATO's current mission, Resolute Support, is to train and equip Afghan security forces fighting the Taliban, which was ousted from power by a US invasion in late 2001 and has since waged an insurgency.

With non-US troop numbers reaching as high as 40,000 in 2008, Europe, Canada and Australia have moved in tandem with the United States in a mission also providing long-term funding to rebuild Afghanistan despite the resurgence of Taliban-led violence and endemic official corruption in the country.

"We will work very closely together in the months ahead on a safe, deliberate and coordinated withdrawal of our forces from Afghanistan," Blinken said, standing alongside NATO Secretary General Jens Stoltenberg.

September 11 is a highly symbolic date as it will be 20 years since Al Qaeda attacked the United States with hijacked airliners, triggering military intervention in Afghanistan.

After withdrawing, the United States and NATO aim to rely on Afghan military and police forces, which they have developed with billions of dollars in funding, to maintain security though peace talks are struggling and the insurgency is resilient.

A key reason for a coordinated withdrawal is the fact that NATO relies on US airlift capabilities and shipping to move valuable equipment back home out of landlocked Afghanistan.

NATO also wants to avoid any hardware falling into the hands of militants, as happened after the US withdrawal from Iraq.

"A lot of armoured vehicles, helicopters and ammunition have been put into Afghanistan and four months is not a lot of time to get them home," said Jamie Shea, a former NATO official and now an analyst at the Friends of Europe think-tank.

"Many European forces won't want to abandon that equipment worth billions of dollars," he said, noting that some could be donated to Afghan security forces.

NATO foreign and defence ministers will discuss their plans later on Wednesday via video conference.

German Defence Minister Annegret Kramp-Karrenbauer said no NATO ally was expected to oppose US President Joe Biden's announcement, expected later on Wednesday, for a complete US withdrawal by September 11. 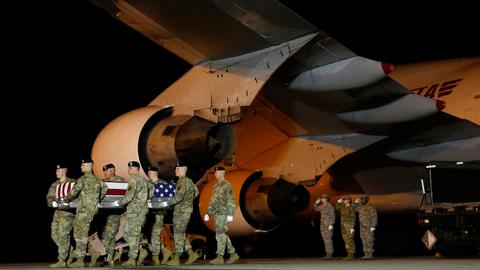