Russia: Will not participate in Taliban government inauguration

Speaker of Russia's upper house of parliament said earlier this week that Russia would be represented at the inauguration by ambassador-level officials, RIA news agency reported.

Russia will not take part in any way in the Taliban government's inauguration ceremony in Afghanistan, Kremlin has said.

Comments from the Kremlin came on Friday.

The speaker of Russia's upper house of parliament said earlier this week that Russia would be represented at the inauguration by ambassador-level officials, the RIA news agency reported on Friday.

Foreign countries have greeted the make-up of the new government in Afghanistan with caution and dismay on after the Taliban appointed hardline veteran figures to top positions, including several with a US bounty on their head.

No women was named in the new interim government.

The Taliban swept to power last month after the US-backed government collapsed followed by US troops' complete withdrawal from the war-torn country after 20 years.

The new rulers have pledged to be more accommodating than during their first stint in power, which also came after years of conflict – first the Soviet invasion of 1979, and then a bloody civil war.

That regime was notorious for its brutal rule and its treatment of women, who were forced inside, deprived of access to school and work, and denied freedom of movement.

This time round, the Taliban have made repeated declarations that they will not carry out revenge attacks on opponents, and women will have access to education and some employment. 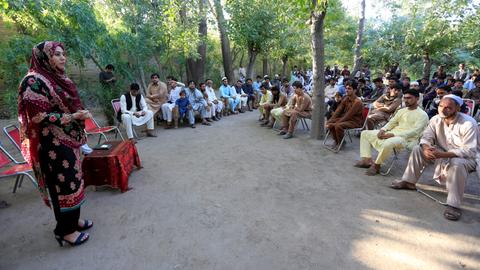