The lack of humanitarian access granted by Myanmar's government to Rakhine state, where more than half a million Rohingya Muslims have fled violence, is "unacceptable," the UN said Friday.

Some 515,000 Rohingya have arrived in Bangladesh from Myanmar's western state of Rakhine in an unrelenting movement of people that began after Myanmar security forces responded to Rohingya militant attacks with a brutal crackdown.

Rights groups say more than half of more than 400 Rohingya villages in the north of Rakhine state have been torched in a campaign by the security forces and Buddhist vigilantes to drive out Muslims.

Mark Lowcock, UN under-secretary-general for humanitarian affairs, reiterated an appeal for access to the population in northern Rakhine, saying the situation was "unacceptable."

Buddhist-majority Myanmar has blocked most access to the area, although some agencies have offices open in towns there and the International Committee of the Red Cross is helping the Myanmar Red Cross to deliver aid.

"This flow out of Myanmar has not stopped yet, it's into the hundreds of thousands of Rohingya (who are) still in Myanmar, we want to be ready in case there is a further exodus," Lowcock told a news briefing in Geneva.

"Half a million people do not pick up sticks and flee their country on a whim."

An estimated 2,000 Rohingya are arriving in Bangladesh every day, Joel Millman of the International Organization for Migration (IOM) told a separate briefing.

Cholera is a risk, amid fears of disease spreading in the rain-drenched camps where aid workers are trying to install sanitation systems, a spokesman for the World Health Organization said.

About 900,000 doses of cholera vaccines are due to arrive this weekend and a vaccination campaign should start on Tuesday.

UN-led aid bodies have appealed for $434 million over six months to help up to 1.2 million people – including 300,000 Rohingya already in Bangladesh before the latest crisis and 300,000 Bangladeshi villagers in so-called host communities. 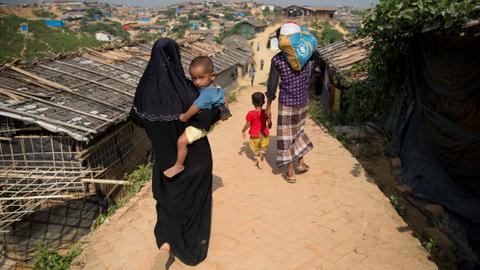