1
Iraqi PM in Iran to push for revival of Tehran-Riyadh talks
2
G7 summit opens in Germany with Ukraine top on agenda
3
G7 nations to ban Russian gold imports in response to Ukraine conflict: US
4
Iran launches rocket with satellite carrier as nuclear talks to resume
5
Macron assigns French PM to set talks for 'government of action'

British PM Boris Johnson is visiting the two Gulf countries in a stepping-up of his efforts to starve Moscow of its income from fossil fuels.

Johnson touched down in Riyadh on Wednesday after talks with Abu Dhabi Crown Prince Mohammed bin Zayed in the United Arab Emirates, another oil-rich Gulf state.

The UK leader is attempting to rein in oil prices, which soared to nearly $140 a barrel before dropping below $100, and help end the West's dependency on Russian oil following the Ukraine conflict.

Also in the region, British-Iranians Nazanin Zaghari-Ratcliffe and Anoosheh Ashoori were released after years in detention in Iran on charges of plotting to overthrow the government and spying for Israel, respectively.

The families of both believe they were being held as political prisoners until the UK settled a $520-million debt for defence equipment dating back to the time of the Shah of Iran.

READ MORE: How Iran became a beneficiary of the Russia-Ukraine war

"The leaders welcomed the long-standing partnership between our two countries and discussed opportunities to increase collaboration between the UK and UAE on energy security, green technology, and trade," a Downing Street spokesperson said in London.

Before leaving for Riyadh, Johnson stressed that Britain has "very important relationship" with the oil-rich Gulf.

"It's not just a question of looking at the OPEC countries and what they can do to increase supply, though that is important," Johnson told British media.

"When we look at the dependency the West in particular has built up on Putin's hydrocarbons, on Putin's oil and gas, we can see what a mistake that was because he's been able to blackmail the West."

Saudi Arabia and the UAE, which are two of the world's biggest oil exporters and both have ties to Moscow, have so far avoided taking a position against Russia.

The UAE and Saudi Arabia are the UK's two largest economic partners in the region, with bilateral trade worth $15.9 billion and £10.4 billion respectively in 2020, Johnson's office said.

Russia is the world's largest producer of gas and one of the biggest oil producers.

Like the United States, Britain plans to phase out Russian oil imports by the end of the year, as part of wide-ranging sanctions targeting Russian businesses and billionaires. 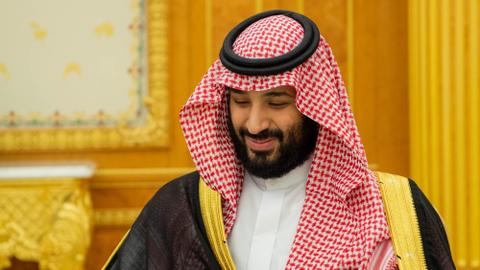 1
Iraqi PM in Iran to push for revival of Tehran-Riyadh talks
2
G7 summit opens in Germany with Ukraine top on agenda
3
G7 nations to ban Russian gold imports in response to Ukraine conflict: US
4
Iran launches rocket with satellite carrier as nuclear talks to resume
5
Macron assigns French PM to set talks for 'government of action'