UK's Johnson sacks ally and entrenches despite calls to resign

Britain's Boris Johnson defies pressure from senior ministers and a mounting rebellion within his party to quit, vowing to stay on as prime minister and fight off any attempts to oust him.

Britain's scandal-hit Prime Minister Boris Johnson has attempted a rearguard offensive against a cabinet and Conservative party revolt, firing a top ally and vowing to "fight on" despite dozens of his ministers resigning.

The dismissal on Wednesday from the cabinet of "levelling up" secretary Michael Gove –– Johnson's right-hand-man in Britain's 2016 Brexit referendum campaign –– dramatically showed that the Conservative leader was not going to bow out without a fight.

"The prime minister is in buoyant mood and will fight on," Duddridge said, adding that Johnson would next week unveil a new strategy against a cost-of-living crisis pummelling Britain.

Gove was the first cabinet member to confront Johnson earlier Wednesday with the message that he must quit for the good of the Tory party and country, according to multiple reports.

A little later, Conservative party lawmaker Simon Hart stepped down from his role as a Secretary of State for Wales, joining a host of resignations in protest of Johnson's leadership.

In a letter to Johnson, Hart said, "Colleagues have done their upmost in private and public to help you turn the ship around but it is with sadness that l feel we have passed the point where this is possible."

Earlier on Wednesday, Johnson reiterated he will not resign and rejected calls by the Labour opposition to hold a snap general election.

"I really don't think that anybody in this country wants politicians to be engaged in electioneering now," he told a committee of parliamentarians, arguing that it wouldn't be "responsible" for him to quit.

"I look at the the issues that this country faces...I look at the biggest war in Europe for 80 years," Johnson said, referring to Russia's offensive against Ukraine. "And I cannot, for the life of me, see how it is responsible just to walk away from that."

If Johnson doesn't resign, a new confidence vote against him will not be brought by his lawmakers until at least next week.

Johnson survived a confidence vote on June 6 in which 41 percent of his lawmakers cast ballots against his leadership. As the rules stand, he cannot face another such vote for 12 months.

But the influential "1922 Committee" of non-ministerial Tory MPs decided on Wednesday it would hold an election to its executive on Monday, before taking a call on whether to change the rules to bring forward a confidence vote in Johnson, three Conservative lawmakers said.

Johnson's grip on power has been slipping since Tuesday night when Rishi Sunak resigned as finance minister and Sajid Javid quit as health secretary.

Both said they could no longer tolerate the culture of scandal that has dogged Johnson for months — above all the so-called "Partygate" affair, which saw him receive a police fine for breaking his own coronavirus lockdown restrictions in Downing Street.

Sunak and Javid walked out just minutes after Johnson apologised for appointing a senior Conservative, who quit his post last week after he was accused of sexual misconduct in a drunken state.

More than 40 ministers and aides have quit Johnson's government since Tuesday. 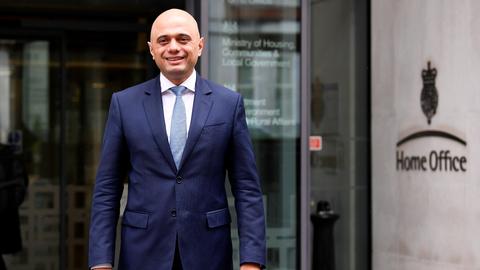