Tunisia faces up to dark history with first public hearings

Tunisians are finally confronting the darker side of their recent history; a legacy of state torture, killing, and forced disappearances. Victims and witnesses of gross human rights violations stood in the first-ever public hearings held on November 17 and 18 to testify to the wrongdoings of past governments. The historic proceedings were broadcast live on Tunisian television and radios.

Sami Brahem, a political prisoner who was arrested in 1991 for his activism on campus, was one of the first victims to speak at the public hearing organised by the Truth and Dignity Commission.

"What happened in the Tunisian prisons in that period is beyond belief; surreal things, you can expect anything to happen," he said in an emotional testimony about the torture he experienced during his eight-year sentence.

He compared Tunisian prisons during the years of President Zine El Abidine Ben Ali's authoritarian rule to the kind of abuse experienced by Iraqi prisoners in the US military-controlled Abu Ghraib Prison in Iraq.

In a soft-spoken voice, Brahem recounted before the hushed room how the dreams of change and democracy of young students in the early 1990s vanished in the darkness of prisons cells where systematic torture was customary. He was burned with cigarettes, stripped naked, suspended in roast chicken position, flogged, beaten, urinated on and sexually harassed.

"The recurrent torture can only lead to losing (one's) mind or becoming mentally unstable," he said. "Many unfortunately did not survive it."

Tunisia was a police state with little freedom of expression for decades, until a popular uprising forced Ben Ali to step down in January 2011.

The hearings were organised by the Truth and Dignity Commission (IVD by its French acronym), a body established in 2013 by the Transitional Justice Law as a key part of the country's wider democratic transition. Based on similar bodies established in countries struggling to move beyond the trauma of massive state abuses such as post-apartheid South Africa, it is intended firstly as a tool to achieve healing and reconciliation. It is the first such project to exist in the Arab world, with the exception of a less extensive commission in Morocco.

The Truth commission was charged with reviewing cases of past human rights abuses and financial corruption, investigating nearly 60 years of humanitarian violations dating back from the mid-50s to 2013, the year of its establishment. The commission has since received more than 62,000 complaints from victims. Before that, it conducted more than 11,000 secret hearings.

The victims and witness spoke in front of the commission members and an audience of high-profile politicians and diplomats, rights activists, survivors of abuse, and representatives of other Truth commissions around the world.

Confronting the past can be painful, as could be clearly seen in the initial hearings.

"Why? I want to know why?" Brahem kept asking his torturers during his one-hour testimony, still grappling with the extent of injustice and abuse he and his fellow prisoners had endured during Ben Ali's rule. Two of his friends died under torture. The naked body of one of them was then thrown on the street, in an attempt to make it look like an accident.

Brahem, now a well-known academic researcher, managed to establish his life after his release from prison. For many other torture victims, like Basma Albali, their horrific treatment during their time in prison destroyed their lives.

Soon after Ben Ali won the 1989 election, he launched a crackdown on religious conservatives and political dissents, leading to a sweeping wave of arrests. Basma's political affiliation and social activism with the conservative Ennahda party, a major political rival to the governing Democratic Constitutional Rally (RCD), was known to security forces. That led to her arrest and torture in 1991.

The first hearings were held in Elissa Club in the wealthy northern suburbs of Tunis. The club was once owned by Ben Ali's notorious wife, Leila Trabelsi, and used exclusively by her and her friends.

Sihem Ben Sedrine, president of IVD, spoke about the symbolism of the location in a press conference on November 14.

"Elisa Club is a nice place in a very beautiful area but it was not used beautifully in the past, it was a symbol of corruption and tyranny," she said, explaining the choice of an exclusive club of the former Tunisian First Lady's infamous in-laws.

"We want to show that society has restored its public sphere," she added.

Although the frequent use of torture in custody was known to most Tunisians, the extent of abuse and techniques used by the tormentors to extract information or simply for revenge shocked many. Details of pervasive sexual violence, psychological violence, rape, suspension, and techniques of tortures from which many have died moved the audience and commission members to tears.

Albali was on the run for ten months, until she realised police had arrested her sister to pressure her into turning herself in, which she did. Albali was both a victim and a witness of torture and sexual abuse. She recounted the horrifying torture she saw inflicted on another political prisoner, Rachid Chamakhi.

"Every day they would bring Rachid Chamakhi naked, the way he was born, his skin was blue; every day the tormentor [...] beat him for three or four continuous hours," she said. "He didn't even have the most basic rights such as drinking water or going to the bathroom."

Chamaki died under torture few days after his arrest. Kasem Chamaki, his brother also testified about his brother's death. His brother had been raped with an object, beaten, and flogged to the extent that some of his bones were visible to other inmates.

The public hearing challenged people's expectation of how bad it could get, from one testimony to another. Each story brought out even darker details. Onlookers discovered that torture and death of their loved ones were not the end of a story for the families of political prisoners.

In the case of Kamel Matmati, an Ennahda activist from Gabes, a coastal town in southern Tunisia, was arrested in 1991. But his arrest was only the beginning of his family's agony.

The very day of his arrest he died under torture, but his family was never informed. For years they searched for him, only learning about his death in 2009 — some 18 years after his disappearance. Police forces had pretended to search for him for months after his death, to convince the family they are not involved in his disappearance. Matmati's wife described how they used to break into her house at night to ask about her dead husband, warning her not collaborate with a "runaway".

Religious conservatives and leftists were all suppressed by the authorities.

Nabil Barakti, one of the founders of the Communist Workers Party, is another political activist who died at the hands of the police. He was only 26 when he was arrested on charges of distributing leaflets in 1987.

Like many other victims, Nabil was tortured to death. Police dumped his body in a spillway, and said he escaped and killed himself.

"They used pliers to pull out his nails and teeth, they broke his left foot," said Ridha Brakati, Nabil's brother. "When we saw his body, he was only wearing shorts. He was like a sausage, his skin cut, his face broken and severely beaten."

The hearing was an opportunity to shed light on state-forgotten crimes and to pay tribute to prisoners who paid a heavy price for speaking out against oppression. Many perpetrators who were involved in the torture or killing of activists are still free today, working on the same jobs. A number of police officers who were charged got a reduced sentence.

Not everyone is happy about the Truth commission or IVD hearings, however.

Almost six years after the toppling of Ben Ali's regime, impunity persists. The Truth commission's role and very existence in the post-revolution period has been seriously questioned by some Tunisian media. The media has portrayed the commission as an institution that takes money from the government in vain.

The nomination of Ben Sedrine, a former journalist and human rights activist who opposed Ben Ali, as the head of the Truth commission set off a spate of criticism. Her opposing role in the past made many question her impartiality while heading the country's most important transitional body.

After the December 2014 elections, the IVD has had a rocky relationship with the presidency and successive governments. This shaky relationship was further exposed by the absence of President Beji Caid Essebsi, Prime Minister Youssef Alchahed, and Parliament Speaker Mohammed Ennaceur from the historic public hearings on November 17 and 18.

Even without broad political support, however, the IVD has gained momentum by airing testimonies of witnesses and victims of police violence silenced for long. The eye-opening testimonies will be for long engraved in the memory of many Tunisians.

Response to the hearing evoked an outpouring of sympathy with the victims and their families. Social media users shared videos and quotes from the two-day hearing, expressing their shock with the gravity of the violations. The victims received messages of solidarity. Brahem recounted, in a series of status shared on Facebook, how overwhelmed he was when he received hundreds of messages of support since his testimony.

"I have discovered the nature of Tunisian women and men, and the depth of their yearning for freedom and their fear of the loss of the revolution," he said.

Braham stated he received a message from a former police officer telling him he couldn't stop crying for two days and asked him forgiveness.

Safa Ben Said is an independent journalist and producer. 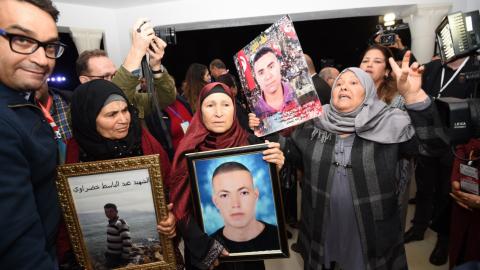 What should we know about Tunisia's transitional justice? 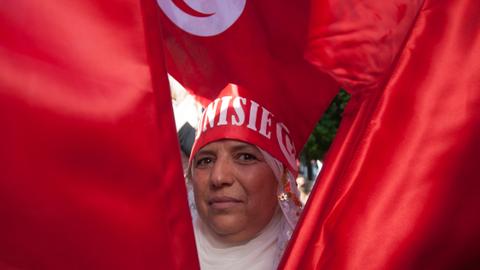