Participants of the "Plasticoin" project can use their virtual coins to get coupons and discounts at restaurants or partnered shops.

On a hot summer's day in southern Uruguay, Graciela Martinez weighs her plastic waste before dropping it in a designated container by the beach.

In return, she'll receive some virtual money on her phone that she can use for discounts on purchases at restaurants or partnered shops.

It's part of a pilot environmental project called "Plasticoin" aimed at encouraging plastic recycling in the South American country.

"Our mission is to take care of the beach," said Juan Rivero, 34, a telecommunications technician who launched the fledgling project alongside 32-year-old industrial designer Nicole Wyaux.

Their test area is a popular seaside resort called Piriapolis.

Participants register online and then deposit their plastic waste at one of three collection points.

The minimum deposit is one kilogram (two pounds), for which participants are rewarded with 100-400 Plasticoins, depending on the type of waste: 100 for household waste, 200 for beach waste and 400 for microplastics of less than half a centimetre (a quarter-inch).

"It's good to recycle for yourself, for your children and your grandchildren," said Martinez, 50, who says she recycles "everything."

Plasticoins are delivered electronically to a mobile phone and can be used to get coupons and discounts at the participating eateries and stores.

Plastic didn't exist when the Piriapolis resort was built during the "Belle Epoque" in 1893, inspired by the French towns of Biarritz and Nice.

Now, though, 13 million tons of the material is dumped in the world's oceans every year, according to the United Nations.

The Plasticoin project has been a much greater success than its creators anticipated when it began in early January with a $5,000 grant from a government development agency.

They had hoped to attract 100 users in the first four months; in less than three weeks, they already have almost a thousand.

Mayor Mario Invernizzi said he welcomed the project "with open arms" as a complement to the town's existing recycling initiatives.

But in the country of 3.4 million people, recycling faces numerous barriers beyond a lack of widespread awareness and opportunity.

According to Federico Baraibar, director of the recycling specialist firm Cempre, 35 percent of plastic collected is intended for recycling.

However, only 12 percent of that actually ends up in the recycling plants.

Attitudes, though, are slowly adapting to the need to take greater care of plastic waste.

For 43-year-old Gustavo Abiega, the remuneration is nothing but an added bonus.

The most important thing, he said, is having a clean beach, because "the beach is part of my life." 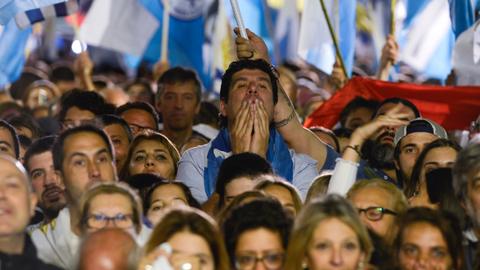