1
What do we know about the killings of four Muslims in New Mexico?
2
Three Turkish firms among world's 100 biggest defence companies
3
A short film from Türkiye makes it to Venice Film Festival after decades
4
Can Zawahiri’s killing help Biden earn political dividends in US midterms?
5
Ankara's 'entrepreneurial, humanitarian' foreign policy benefits world: FM

The PKK has launched a terror campaign against Turkey for four decades, targeting both civilians and security forces. Here's how the terror group became a menacing force.

1974: PKK was established in Ankara as a Marxist-Leninist organisation by mostly left-leaning Kurdish students led by Abdullah Ocalan.

1978: PKK held its first congress at a tea house in a village near Turkey’s southeastern province of Diyarbakir.

The group initially sought to establish a joint independent entity in Kurdish-dominated areas of Turkey, Syria, Iraq and Iran. They named it as Kurdistan.

November 1980: PKK bombed the Turkish consulate in Strasbourg in what many described as a “fruitful collaboration” with the Armenian armed group ASALA, which targeted Turkey’s diplomatic missions and other assets in mid 1970s.

1982: PKK established its first militant training camp in the Bekaa Valley of Syria under the protection of Hafez Assad's regime and with support of the Palestinian Liberation Organisation (PLO).

1984: PKK launched its first terror attacks against Turkish security posts in Eruh, which is located in eastern province of Siirt, and Semdinli in Hakkari which borders Iran.

1985: Turkey established a paramilitary group of Village Guards, who were recruited from mostly Kurdish tribes, as a counter-measure against the PKK attacks.

1990s: The PKK increased its attacks against security forces and civilians in the entire decade of the 90s. Fierce clashes left thousands dead and caused a great damage to property.

The PKK actions and tactics have been heavily criticised by many human rights groups including Amnesty International and Human Rights Watch blaming the group of war crimes and various atrocities.

On the political front, the first Kurdish-dominated parties, which were allegedly PKK-influenced, have successively began to emerge in Turkish political spectrum.

Until current Peoples’ Democratic Party (HDP), there have been at least seven parties established by this political movement. Five of them were active during the 1990s.

These parties were successively closed by the Turkish Supreme Court on the grounds that they had been involved in separatist terrorist activities connected to the PKK, violating the constitution.

June 1990: The PKK attacked a Kurdish-populated village, Cevrimli, in Sirnak province, killing 27 civilians on the spot.

May 1993: The PKK killed 33 unarmed Turkish soldiers, who were being transported by shuttles into their respective units, after ambushing the shuttles on Elazig-Bingol highway.

July 1993: The PKK brutally massacred 33 peasants in Erzincan’s Basbaglar village. They burned the village after the massacre.

February 1999: PKK leader Abdullah Ocalan was captured in Nairobi, Kenya and brought to Turkey by Turkish special forces following his expelling from Syria.

June 1999: Ocalan was sentenced to death by a Turkish court following his high-profile trial. It was later altered to life imprisonment after Turkish parliament changed its criminal law abolishing death penalty in a bid to get a full European Union membership.

During his trial, Ocalan reportedly said, “I am ready to serve the Turkish state.”

August 1999: Ocalan called his “comrades” to declare a unilateral ceasefire and pull out from Turkish territory. The PKK followed Ocalan's instructions, announcing a ceasefire the same year, which more or less was observed until 2004.

2003: The year was quite turbulent as the PKK marked crucial developments for the group.

After changing its name several times since 1999, PKK declared in November 2003 it will not pursue a separatist agenda anymore stating that the organisation is willing to stay in the existing nation-states of the Middle East.

During this year, more than a thousand members of the group left the organisation in a protest after an internal infighting among the leading figures including Ocalan’s younger brother Osman Ocalan, who claimed to be a reformist.

2004: PKK announced in early summer that the group was abandoning the ceasefire and restarting its armed campaign against Turkey.  In June, several thousand PKK members crossed into Turkish territories, according to Ankara.

That marked the second violent phase of PKK’s terror campaign after the period of 1984-1999.

2004: In April, the EU resolved to put the group into its terrorist organisation list. The US followed suit later in the year deciding to freeze worldwide assets of the organisation.

2005: PKK decided to go back to its original name in this year.

Ocalan also made an important announcement in March that Kurds no longer needed a nation-state but a structure of democratic confederalism within the existing nation-states.

May 2005: His views were adopted by the PKK during its annual congress which created a new umbrella organisation called KCK.

2007: HDP’s predecessor Democratic Society Party (DTP) was described to have an affiliation with PKK by a prominent EU-funded think-tank in a June report.

"It is an obvious secret that DTP is connected to PKK in a way and PKK is a terrorist group,” EU Institute for Security Studies said in the report.

During the “opening," the Turkish government expressed that it has a sincere desire to resolve Kurdish question not only by taking security measures but also through peaceful means.

This year had also seen the designation of senior PKK leaders including Murat Karayilan and Zubeyir Aydar as foreign narcotics traffickers by the US.

Private TV channels were allowed to broadcast in Kurdish and other languages.

The number of security checkpoints were decreased in southeastern and eastern regions.

Also universities were allowed to establish institutions, and research centers under languages other than Turkish.

2011: Many important developments happened this year regarding PKK and Turkey relations.

First of all, PKK had incrementally increased its attacks against security forces which damaged the trust between the parties undermining the “Solution Process."

In April, US also designated Cemil Bayik and Duran Kalkan, who were two of PKK founders, as Specially Designated Narcotics Traffickers.

2012: The year marked the most violent period of the PKK since 1999, leading to the deaths of hundreds.

An important factor of the PKK’s actions against the Turkish state was the Syrian civil war which enabled PKK’s Syrian extension PYD/YPG to establish control over a swath of territory in northern Syria.

PYD declared “cantons” in its controlled regions which was seen as a Syrian implementation of Ocalan’s proposed democratic confederalism model. That perception further emboldened PKK leadership to take on Turkey.

December 2012: Turkish President Recep Tayyip Erdogan revealed the secret talks held with Ocalan in the island of Imrali in the Marmara Sea.

Erdogan signaled that the peace process started with the democratic opening will continue anyway though all sabotages.

2013: It was the first year of the peace process which was named by the Turkish government as “Resolution Process.”

During the March 2013 Newroz celebrations, Ocalan called PKK to withdraw its terrorists from Turkish territory.

PKK reacted to the call and the withdrawal began which was even broadcasted by Turkish TV channels.

However, it is widely reported and also accepted by the PKK leadership itself that the group has not withdrawn from Turkey completely.

Later on, the issue of disarmament and withdrawal will be the most important issue on which the parties could not establish a common understanding.

October 2014: Though several good developments in Turkey concerning the peace process, there was increasing tension between the parties regarding PYD’s “cantons” in northern Syria, particularly following the clashes between DAESH and YPG, which is the militant wing of PYD.

In early October, HDP leader Selahattin Demirtas called the party’s supporters to the streets to rally in support of the northern Syrian city Ayn al Arab which was besieged by DEASH militants at the time.

Ayn al Arab has been controlled by YPG since July 2012.

On Oct. 6-8, 2014, the protests triggered a bloody fight between Free Cause Party (Huda-Par) supporters and the YDG-H, a PKK affiliate, which is blamed for the attacks and deaths of more than 40 people.

The Huda-Par is considered as a conservative successor to a Kurdish armed group named Hizbullah, distinct from the Lebanese Shia group with the same name.

PKK’s Bayik announced that the group sent back its armed terrorists to Turkey after the Ayn al Arab incident.

Turkey accused the PKK of escalating the Ayn al Arab conflict and extend it in Turkish territories through Ayn Al Arab riots.

March 2015: Despite many differences, Ocalan’s letter to PKK leadership and others were read during March Newroz celebrations in Diyarbakir. The letter asked PKK leadership to disarm and end its 40 years old of terror campaign against Turkey.

Ocalan said PKK should immediately convene a disarmament congress which needs to be overseen by a monitoring committee.

Later, the Qandil leadership stated that they were not considering to convene the disarmament congress.

June 2015: Turkey held a crucial general election on June 7, when as a first the HDP surpassed Turkey’s 10 percent electoral threshold to be represented at the Parliament.

A week after, PKK’s other Syrian extension PYD took over Tal Abyad, a strategic district in northern Syria, joining two of its “cantons” next to the Turkish border.

July 2015: At the end, the PKK’s umbrella organisation, KCK, unilaterally ended more than two years of ceasefire with the government on July 11 and further threatened Turkey with attacks.

After the threats, the PKK has launched various attacks on both police and the Turkish Armed Forces.

July 2015- March 2016: Since the renewed PKK terror campaign, the attacks led to the deaths of 400 Turkish security officials.

In response to the PKK attacks, Turkish security forces have launched a large-scale operation against PKK groups and killed nearly four thousand PKK members, according to Ankara.

2017: Turkish top officials have repeatedly warned the US and its Western partners not to ally with the YPG in their fighting against Daesh, but Ankara’s warnings have not been heard by Washington, which continued to heavily arm and train the PKK’s Syrian wing.

Ankara has also indicated that it will send its armed forces to clean up YPG forces from its border with Syria if necessary.

2018: Turkey has launched the Operation Olive Branch to eliminate YPG forces from Afrin in northwestern Syria. The operation successfully forced the YPG/PKK to leave the city, enabling Turkey and its allied forces to take over the city. 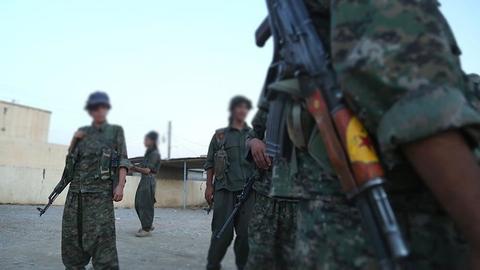 1
What do we know about the killings of four Muslims in New Mexico?
2
Three Turkish firms among world's 100 biggest defence companies
3
A short film from Türkiye makes it to Venice Film Festival after decades
4
Can Zawahiri’s killing help Biden earn political dividends in US midterms?
5
Ankara's 'entrepreneurial, humanitarian' foreign policy benefits world: FM