Saad al Jabri was a former senior Saudi intelligence official, who had fallen foul of Saudi Crown Prince Mohammed bin Salman. A plot to kill him was unwittingly foiled by Canadian border guards, according to court documents.

A lawsuit against the Saudi Crown Prince Mohammed bin Salman (MBS) alleges he sent a hit squad to Canada to murder a former Saudi official who had fallen out of favour.

Saad al Jabri’s lawyers filed the case at a federal court in Washington DC in response to an apparent sustained effort by the prince to kill the former high-level intelligence operative.

On October 15, less than two weeks after a Saudi hit squad murdered and dismembered journalist Jamal Khashoggi in Istanbul on October 2, a team arrived in Canada to carry out a similar killing.

Canadian border officers became suspicious about the group’s behaviour after they claimed not to know one another when questioned. After a group photograph of the men together was found, officials decided to reject entry into Canada for all but one man, who carried a diplomatic passport.

By rejecting entry to the group, the officers prevented an apparent attempt on al Jabri’s life.

The Saudi defector was tracked down after a concerted effort to pinpoint his location by agents loyal to MBS.

He was once a key pointman between Saudi intelligence services and Western agencies, working as a deputy to former Saudi Crown Prince Mohammed bin Nayef, who was then Minister of the Interior.

Al Jabri is credited with stopping terrorist attacks, including one on synagogues inside the US, earning him the respect of American intelligence officials.

His fortunes soured with the demise of his patron, Bin Nayef, who was removed from the crown prince position by MBS in a palace coup in 2017. Nayef has since been detained in an MBS crackdown on potential rivals to the throne.

MBS was reportedly incensed that American intelligence officials continued to liaise with Al Jabri even after his own ascent to power.

The lawsuit reads: “Dr. Saad was privy to sensitive information about Defendant bin Salman’s covert political scheming within the Royal Court, corrupt business dealings, and creation of a team of personal mercenaries that Defendant bin Salman would later use to carry out the extrajudicial killing of Jamal Khashoggi, among others.

Fearing for his safety, in 2017, al Jabri made his way first to Turkey and then to the US.

Thus began the crown prince’s long campaign to silence him.

After his escape, MBS made use of a multi-pronged approach to get al Jabri to return to the kingdom.

In one WhatApp message, MBS tells al Jabri: “Don’t force me to escalate things and take legal measures, as well as other measures that would be harmful to you.”

In another, the crown prince warns: “We shall certainly reach you.”

Another read: “Doctor, where should we dispatch the airplane to fetch you?”

While al Jabri’s wife and several other members of his family have been able to escape Saudi Arabia, his son, Omar, and daughter, Sarah, remain in the country. Saudi officials prevented them from leaving the country in 2017 and in March 2020 arrested the siblings in a bid to add to the pressure on al Jabri.

Saudi authorities also withdrew a scholarship from al Jabri’s son Khaled, in the hope that his student visa would be made void so that he would be forced to return to Saudi Arabia.

“Saudi authorities are sinking to new lows in going after the families of former officials out of favor with the current leadership,” said Michael Page, deputy Middle East director at Human Rights Watch, at the time.

The court documents allege Saudi Arabia made use of a network of agents within the US to help locate al Jabri, including students studying in the US and employees of Saudi investment and PR vehicles.

One alleged co-conspirator, Layla Abuljadayel, a dental student at Boston University, was reported to have contacted al Jabri’s wife under the pretence that she wanted to find a marital partner for the couple’s daughter.

US intelligence officers were aware of the threats to al Jabri and his family as early as January 2018.

That month, Khalid al Jabri, was prevented from boarding an unspecified flight departing from Boston’s Logan International Airport by FBI agents, who informed the young man of a credible threat to his life and that of his family.

Al Jabri’s lawyers assert that the threat to his life remains to this day, alleging that close advisors of MBS were told by the prince that there was a religious edict (or fatwa) allowing the murder of the Saudi defector, as of around May 2020.

This time round, the would be death squad, were allegedly planning to enter Canada by land. 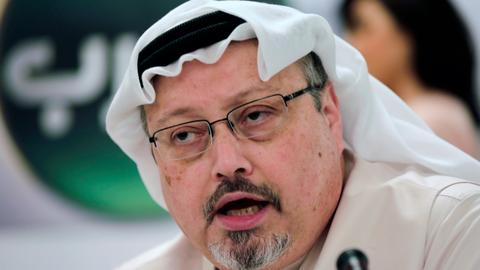 A year after Khashoggi's death, Saudi Arabia struggles to find its identity