Analysis: A Bernie Sanders presidency may not bode well for Saudi Arabia

1
Turkey set to build two hospitals and provide free face masks for all
2
Q&A: When life imitates art in Turkey's Covid-19 quarantine
3
Why India's Muslim truckers and aid workers fighting Covid-19 face attacks
4
Is the UK adrift now that Boris Johnson is in hospital?
5
What Africa and an Indian state tell us about containing past contagions

Democratic frontrunner says the country is run by murderous thugs during a televised debate between 2020 presidential hopefuls.

Donald Trump may be a reliable ally for Saudi Arabia, but if Bernie Sanders wins the Democratic nomination for the 2020 US presidential election and goes on to beat the incumbent, things between Riyadh and Washington could turn sour fast.

The democratic-socialist Sanders pulled no punches when he called the rulers of the kingdom “murderous thugs” during a televised debate hosted by CNN.

Riyadh has no shortage of critics on Capitol Hill, especially after its killing of Saudi dissident journalist Jamal Khashoggi by a hit squad directly sent by Saudi Crown Prince Mohammed bin Salman (MBS) in October 2018, according to intelligence officials in the US.

Few critics as loud as Sanders, however, have a realistic shot at the presidency.

The senator from Vermont has consistently criticised Saudi Arabia for its role in the Yemen war, as well as for the killing of Khashoggi. He also wants an end to arms transfers to Riyadh.

What’s ahead for Saudi Arabia if Sanders wins?

The prospect of a Sanders presidency will be causing more than a few jitters among Saudi Arabia’s ruling elites.

Its most immediate consequence will be the absence of the shield that has protected Saudi Arabia from being held culpable for the murder of Khashoggi, in the form of Donald Trump.

Trump has acted as a buffer between Saudi Arabia and members of Congress wanting to punish Riyadh for the killing, including the vetoing of a senate resolution aimed at ending US support for the war in Yemen.

If Sanders does win and follows through with his pre-election rhetoric, Saudi Arabia could face the pent up wrath of the US congress. This could take the form of sanctions and withdrawal of logistical support for the war in Yemen.

Such a scenario would be a drastic reversal from the near impunity the Trump presidency has provided the country during the de facto reign of MBS.

According to the New York Times, Saudi and Emirati princes were eager to help Trump win the 2016 election and their emissaries, such as the convicted paedophile and serial sex offender George Nader, had met with the Trump campaign to discuss ways to ensure his election.

Plans discussed included the manipulation of social media to tilt the race in Trump’s favour.

Targeted social media advertising aimed at voters in key marginals is believed to have played a role in Trump’s victory. 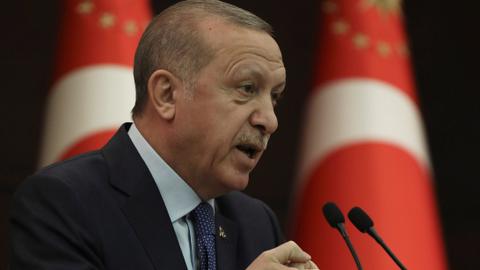 1
Turkey set to build two hospitals and provide free face masks for all
2
Q&A: When life imitates art in Turkey's Covid-19 quarantine
3
Why India's Muslim truckers and aid workers fighting Covid-19 face attacks
4
Is the UK adrift now that Boris Johnson is in hospital?
5
What Africa and an Indian state tell us about containing past contagions