1
Why Switzerland-Serbia World Cup match was more than just football
2
How Iran’s political factions are reacting to ongoing protests
3
Cap on Russian oil: what happens next?
4
Nord Stream probe: The known and unknowns of the bombing
5
How Qatar World Cup offers low-income Muslims the Umrah opportunity

Fakhrizadeh’s assassination in broad daylight in the city of Absard, just east of Tehran makes him the seventh Iranian nuclear energy scientist to be assassinated in Iran since 2007.

The fallout from the latest killing could well play out over months or even years, and Tehran has made it clear that it believes that Tel Aviv with the backing of the US is behind the assassination.

“The immediate result from the illegal assassination is that Iran will roll back some of the limitations specified in the nuclear agreement in the JCPOA and this is already underway in the Iranian parliament,” said Hamed Mousavi, a professor of Political Science at the University of Tehran.

The JCPOA nuclear agreement between Iran and the P5+1 (China, France, Germany, Russia, the United Kingdom, and the United States) was signed in 2015 and ratified in a UN Security Council resolution in the same year.

That deal, however, was signed under the Obama administration and when Trump entered office he made it abundantly clear that he would not abide by it, eventually pulling out the US in 2019. This happened even though the International Atomic Energy Agency, which monitors the implementation of the JCPOA at the time said that Iran was in full compliance.

Since then Iran has breached some of its legal requirements, however it has not yet abandoned the deal altogether.

Biden, who was vice president in the Obama administration has promised that he would return to the deal, however, the latest attack could sap even the last vestiges of trust between the two sides.

“The sentiment for a lot of people in Iran is that why is it that even though we are upholding most of the commitments under the nuclear deal at the same time we are being sanctioned like never before,” added Mousavi, speaking to TRT World.

The timing of the assassination seems to also have been thought out, occurring a day after a prisoner swap deal between Iran and Australia on November 27. While there is no indication that Australia knew about the killing beforehand, Israel would have likely not wanted to scupper it.

Anonymous Israeli officials have barely concealed their glee at the successful assassination widely attributed to them. Iranian Professor Seyed Mohammad Marandi, speaking to TRT World, warned that at least two countries, likely Israel and the US, could have been involved in the attack.

Tehran will very likely respond to the attack in kind, said Marandi adding that “there will be a lethal response.”

Any Iranian response to the attack will firstly impact its relationship with the International Atomic Energy Agency, which monitors the implementation of the JCPOA nuclear agreement, warned Marandi.

Tehran, however, is acutely aware that the attack on one of its chief nuclear energy scientists — who earlier this year led a team of scientists which developed the country’s first kits of coronavirus diagnosis — is a provocation coinciding with a change of administration in Washington.

Inside Iran, Fakhrizadeh eschewed publicity, preferring to remain outside the public eye. The US, however, had sanctioned him since 2007 for his role in Iran’s nuclear energy programme, which it alleges has a military dimension.

“The killing was unprecedented, unfair and it was a sad reminder of the scientists who were killed a decade ago,” said Farin, a journalist based in Tehran who wished not to give her last name.

The silence in European capitals following the killing has not gone unnoticed in Tehran either.

“They preferred to remain silent,” said Farin adding that, “The fewer scientists capable of advancing the Iranian programme, the better.”

The killing of such an important scientist is also an embarrassing security failure in Tehran and many will be asking what lessons, if any, did Iran learn from the previous assassinations.

“The authorities should have been more prepared and remember that the enemy is very strong with very precise information from inside Iran. They already knew the spies were leaking info. This assassination is the latest in a series of security incidents that have happened in recent months,” she added.

Earlier this year Iran faced a series of mysterious fires at the Natanz nuclear power plant which were later attributed by Iranian authorities to an act of sabotage.

In the past, Iran pointed the finger at Azerbaijan for facilitating Israeli espionage inside the country. The Azerbaijani president has described relations between the two countries “like an iceberg, nine-tenths ... below the surface.”

But the killing caps a particularly painful year for Iran.

The US killing of General Qasem Soleimani in Iraq was a blow to Tehran. Soleimani was widely seen as one of the architects of Iran's Middle East policy. At Soleimani’s funeral, a further 56 mourners died in a stampede.

Then the accidental shooting down of an aeroplane full of Iranians along with 63 Canadians, a few days after Soleimani’s death, left 176 people dead. The novel coronavirus hit the sanctioned country hard, leaving almost 50,000 dead.

“Let’s not forget sanctions exacerbated the effects of the corona pandemic,” said Farin.

The aftermath of all these events, says Farin, is “that anger exists within the society. It is pointed at both the government on the one hand and at foreign countries on the other.”

And it's not hard to see why that anger exists. Even as Iran has largely abided by the nuclear agreement the “sanctions are even worse than when the nuclear deal was signed,” says Mousavi.

“Ordinary Iranians are asking themselves why should we limit our nuclear energy programme to such an extent while we are being sanctioned and our scientists are being killed.”

Going forward Iran will be cautious in how it responds. It knows that a hawkish Trump administration, a belligerent Netanyahu and the Saudi Crown Prince Mohammed bin Salman will do what they can to prevent Biden from returning to the nuclear deal. 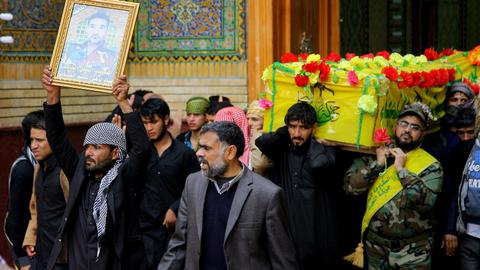 Will pro-Iranian militias leave Syria after the American pull-out?

1
Why Switzerland-Serbia World Cup match was more than just football
2
How Iran’s political factions are reacting to ongoing protests
3
Cap on Russian oil: what happens next?
4
Nord Stream probe: The known and unknowns of the bombing
5
How Qatar World Cup offers low-income Muslims the Umrah opportunity