Argentina’s notorious military dictatorship was responsible for the forced disappearances of over 30,000 people. Yet for poor and indigenous communities, the disappearances are still happening.

The last person to receive a sign of life of Santiago Maldonado was his friend, Ariel Garzi. Back on August 1, Maldonado, a 28-year-old tattoo artist from Buenos Aires who’d been living in the Patagonian town of El Bolson for the past few months, trekked down to the outskirts of the town of Cushamen. He was going to join a handful of protesters from a local Mapuche indigenous community who had erected a roadblock not far from a parcel of land they’d occupied since 2015.

They lay claim to the territory – their ancestral land – which today is legally owned by the Benetton family, the clothing mogul behind the United Colors of Benetton. Maldonado, sympathetic to the Mapuche cause, stood with them when police operatives thundered down the thoroughfare to dislodge the protest.

“I was told that the police had taken someone, but at the time I didn’t know it was Santiago,” Garzi told me. “I found out it was him the following day, on August 2, at 3:23 pm, when I was sent his picture on WhatsApp. When I called his number, someone answered and kept me on the line for 22 seconds. No one talked to me on the other end and you could hear an empty room, with echoes and loud footsteps that sounded like boots.”

Garzi said he is “100 percent sure” police are responsible for his friend’s disappearance. "Everyone here knows that [they are behind it],” he said.

The thousands of Argentinians who took to the streets throughout the country over the last three months – notably on September 1, the largest of the rallies – carrying images of Maldonado and demanding the government provide answers over his disappearance clearly hold similar views.

Maldonado was not seen or heard of again until October 17, when his body was found floating in a nearby river. A preliminary autopsy determined the cause of death to be asphyxiation by drowning and failed to find additional injuries, though a number of experts didn’t rule out the possibility that further tests and examinations could reveal previously unseen injuries. Maldonado’s parents, civil society groups and huge swaths of Argentinians still believe the most likely scenario is that police, deploying excessive force, killed Maldonado then tossed his body into the river to hide the evidence. The Argentinian government’s refusal to investigate security forces over the killing, a botched investigation into the case and misleading media coverage further point to possible foul play.

Maldonado’s death and disappearance have rocked Argentina for the past three months and revived the spectre of the country’s last military dictatorship (1976-1983), during which some 30,000 people were kidnapped, murdered and “disappeared” by armed forces. But Maldonado’s case is not just a throwback. It’s only the most recent and most widely discussed case; part of a much larger and under-reported trend of unchecked police brutality in Argentina.

You hear El Bolson before you see it. The sound of drum circles alerts you to its throngs of dreadlocked artisans, most of whom have come to the small Patagonian town looking for more tranquil pastures, away from their native Buenos Aires or Neuquen, where they chafed against a political order that they deemed to be alien and oppressive.

The town’s anti-system roots go back to Argentina’s dictatorship, when Argentinians fled the state terror most present in cities. Today, the town’s artisans peddle their crafts at the weekly fair, luring long-haired Australian backpackers away from their bottles of Pilsner to their wooden carvings, glass-blown jewellery and homemade jams, occasionally handing out leaflets inviting them to the next consciousness-raising session or celebration of the Inca fertility goddess Pachamama.

Maldonado was, briefly, one of them. The 28-year-old had been backpacking throughout the continent and stopped over in El Bolsón, where he found kindred spirits like Garzi, a 26-year-old artisan. The two became friends at the local fair, where Garzi sold wooden arrows for children’s crossbows. They’d meet up after fair hours to grab a beer, discuss their political views and sympathy for the local Mapuche indigenous community, embroiled in its lands rights claim.

“He’s a strong supporter of the Mapuches and thought their struggle was right,” Garzi said of Maldonado. “He’s got a big heart.”

Garzi and many other residents of El Bolson also advocated in support of the Mapuches and also had run-ins with the police. “On various occasions, the police have stopped me in the street, they’ve hit me, asking me for information about the community,” he said. “The worst time was one week before Santiago disappeared, three police officers pulled me into a truck and started to beat me, and a cop pulled out a .38 revolver and pointed it at my head. Police persecution against people who support the cause is strong.”

Before the August 1 police intervention in which Maldonado disappeared, there were many others. Garzi recalls one particularly brutal incident on January 11.

“There ended up being 250 police along with a special state task force, horses and trucks. Let’s say the repression was intense,” he said.

Amnesty International Argentina director Mariela Belski explained that the rights of indigenous peoples in Argentina – already historically under siege ever since Argentina’s 1870s “Conquest of the Desert,” when Argentinian troops seized control of Patagonia, killing thousands of indigenous inhabitants and displacing thousands more – have been newly infringed in the last 20 years. Large corporations, in particular, are making further incursions onto the remaining lands still communities inhabit.

“There have been big advances in the extractive model of activities such as agribusiness, mining, oil and forestry,” she explained. “Even though the law recognises the rights of indigenous communities, in reality their rights are not only ignored but infringed.”

Though Mapuche responses are typically steeped in peaceful and passive resistance – land occupation and protests are preferred tools – occasional sabotage and acts of violence do crop up. These largely infrequent incidents have been used by the Argentinian state and establishment media press to discredit the community’s efforts and excuse excessive use of violence by police, Belski says. Following Maldonado’s disappearance, countless articles among national papers went so far as to speculate that he belonged to the Mapuche Armed Resistance (RAM), a fabled corps lambasted as a terrorist organisation by mainstream media. Garzi argued that this claim was “ridiculous.” “Neither he nor I could be members because we’re not Mapuche. In that sense, the Mapuche are very strict,” he said. Maldonado’s family accused the state and media of manufacturing falsehoods to justify Maldonado’s disappearance.

In addition to affecting indigenous communities, police brutality and torture target youth – from minority groups and poorer segments of the population – whose families’ voices go unheard. According to a 2016 report from the National Coordinator Against Institutional Repression (CORREPI), there have been approximately 5,000 deaths caused by police violence, or one death every 25 hours, since 1983. A more recent report by the same organisation states that Maldonado’s forced disappearance is the 200th since then.

“Maldonado’s disappearance is just one more case among many since the return of democracy,” Belski said. “It’s not the only one.”

As a 2016 report on police violence in marginalised neighbourhoods by the Center for Legal and Social Studies (CELS) – an NGO dedicated to the promotion and protection of human rights in Argentina since its founding in 1979 – between 2005 and 2015, Buenos Aires Province’s police force increased from 45,000 to nearly 90,000 operatives, in response to politicians’ cries to crack down on crime. But greater police presence in working-class neighbourhoods and slums has largely succeeded in giving police superiority complexes and allowing them to act with impunity, in turn driving residents from marginalised neighbourhoods to resent this Big Brother-like control. Case in point: in 2016, over the course of three months, police arbitrarily apprehended 150,000 people, the report says. Of these, only 450 – or 0.3 percent – ended up having cause to be detained.

Given the fact that many, if not most, victims of institutional violence are reluctant to report incidences to the authorities likely responsible for or linked to the abuse, these figures are probably lower than they should be.

Luciano Arruga is one of the most emblematic cases. In September 2008, the 16-year-old, who’d been detained a few months earlier on suspicion of petty theft, was picked up by police from his home in the working-class neighbourhood of La Matanza, in the Greater Buenos Aires Area. Whether police suspected him of petty crime on the second occasion is unknown. He was taken to an unauthorised site where police beat him for nine hours, occasionally threatening to take him to a police station “to be raped” by older detainees. Family and acquaintances reported that he suffered from intense depression after his ordeal and say that police continued to harass him when they came across him in the street. Some witnesses allege police asked Arruga to steal cellphones for them, and further harassed him when he refused. The following year, on December 31, 2009, he disappeared for good. He was found in an unmarked grave on October 17, 2014. According to evidence uncovered since, he was hit by a car the night he died and buried by police officers.

“Blows to the whole body, cuts, kicks, pepper spray, electric prods, mock executions and explicit death threats: these are some of the forms of institutional violence young people from poor neighbourhoods face when in custody. In addition to physical and psychological violence, they do not receive medical assistance, are denied visits, prohibited from seeking contact with their families and from access to food,” the CELS report reads.

Legacy of the dictatorship?

Garzi and many other Argentinians charge that the current right-wing administration is essentially authoritarian and believe that Maldonado’s death and disappearance is proof of that. “Unfortunately, we’re seeing the beginning of a new dictatorship,” Garzi said.

That’s even though he and Argentines under 30 were all born long after the military regime’s collapse. Many older Argentinians who did live through the military rule of the 70s and early 80s laugh at such comparisons. “Even in your wildest dreams, you couldn’t compare the current situation with the dictatorship,” Miguel Angel Sosa, a 50-year-old El Bolson resident and member of the local Tourism Chamber, told me. He insists there’s no proof Maldonado was actually disappeared by armed forces and adds that, “90 percent of the police live in the neighbouring towns. We all know them, they have families here, their kids go to the local schools. Really, they’re the only force that carries any prestige in the region.” Argentinians ought to put their trust in the investigation and judiciary, he says.

Maldonado’s case and police brutality as a whole is an issue that transcends party lines but simultaneously reveals how the dictatorship’s legacy continues to drive a wedge between the left and right. While the left accuses the ruling right of recreating a dictatorship-like climate and seeks to galvanise the public against it, the right turns a blind eye to plain institutional violence.

“What we can’t forget is that his disappearance happened during a repression, without a judge’s order and was carried out by police,” Belski says. “It’s vitally important that the authorities guarantee an independent, rigorous and impartial investigation be carried out to determine who was responsible for Santiago’s disappearance and death, who ordered it, who knew about it and who failed to act against it.” Freelance journalist based in Barcelona. 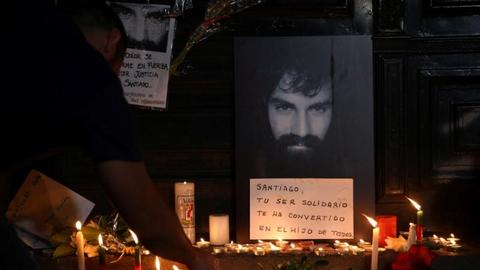 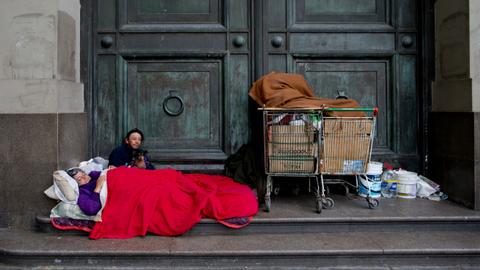