Barack Obama opens up on AIPAC influence during his presidency

1
French media devote most of their coverage to the far-right, study finds
2
Will a Netanyahu plea deal end his political life?
3
Case against Kashmiris for celebrating Pakistan cricket win is 'fabricated'
4
What we do and don’t know about the cyberattack on Ukraine
5
How Aafia Siddiqui’s case symbolises 'the lies' of War on Terror

Democrat says that the pro-Israel lobby group said those politicians who criticised Israel “too loudly” risked being labeled anti-Semitic.

Former US President Barack Obama has opened up about the influence of the pro-Israel  lobby on US lawmakers.

While the comments contained in his presidential memoirs ‘A Promised Land’ fall short of what would be considered criticism, the Democrat does say that those deemed too critical of Israel risked being labeled ‘anti-Israel’ or even ‘anti-Semitic’.

The former Democratic leader said that while 70 percent of American Jews gave him their vote, there were some concerns among members of the America Israel Public Affairs Committee (AIPAC) lobby, which feared that he did not feel his outward support for the Jewish state in his “guts”.

Obama wrote that any criticism of Israel by US lawmakers, even when Israel had gone against US policy, was subject to the lobby’s wrath. He said those who criticised Israeli actions “too loudly” risked being labeled ‘anti-Israel’ or even ‘anti-Semitic’, and could have to contend with a “well-funded opponent” during elections.

In one instance described by the former president, “White House phones started ringing off the hook” after Obama asked Israeli leaders to freeze settlement activity, adding that he was the target of a “whisper campaign” that characterised him as hostile to Israel.

He also wrote that Israeli Prime Minister Benjamin Netanyahu’s self appointed role as the ‘defender of Jews’ had led him to “justify almost anything that would keep him in power.”

Israel benefited from huge aid deals during the Obama presidency, including a mammoth $38 billion package during its final year, but there were signs of personal tension between the president and Netanyahu.

A notable parting shot fired by the Obama administration came in the form of an abstention during a December 2016 UN Security Council resolution, which condemned Israel’s continued settlement building activities in the occupied West Bank and East Jerusalem.

Relations between Obama and Netanyahu had soured over the latter’s apparent lack of commitment to finding a solution to the Israeli-Palestinian conflict.

These rare displays of US anger during the twilight stage of the Obama era had little effect on the ground, as the Democrat was soon replaced by Republican President Donald Trump.

Under the Trump administration, Netanyahu and Israel have benefitted from an effective carte blanche, with no effort on the part of the White House to call for restraint on the issue of settlement expansion and even recognition of Israel’s sovereignty over land that it is internationally recognised as illegally occupying, such as East Jerusalem and the Golan Heights.

How will ties change under Biden?

Even despite his personal problems with Netanyahu, Obama was an ardent supporter of Israel, pumping its military budget with tens of billions of dollars in aid and unflinchingly supporting its devastating wars in Gaza, which left thousands of Palestinian civilians dead.

US President-elect Joe Biden served as vice president under Obama and is considered to the right of the former president on the issue of Israel.

Like Obama, Biden is likely to resume funding to the Palestinian authority and open up channels of communication that were shut off during the Trump administration, such as the Palestinian mission in Washington.

The Biden presidency will come during an era in which increasing numbers of Democrats are openly voicing criticisms of Israel over its occupation of Palestinian land and its treatment of the Palestinian people both in the occupied territory and those living within its internationally recognised borders.

Biden’s primary rival Bernie Sanders, who is Jewish himself, has criticised Netanyahu and labeled him a ‘reactionary racist’. 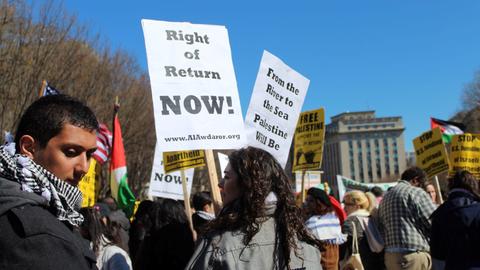 1
French media devote most of their coverage to the far-right, study finds
2
Will a Netanyahu plea deal end his political life?
3
Case against Kashmiris for celebrating Pakistan cricket win is 'fabricated'
4
What we do and don’t know about the cyberattack on Ukraine
5
How Aafia Siddiqui’s case symbolises 'the lies' of War on Terror