Can NFTs empower artists and democratise the art industry?

Through these blockchain-enabled digital assets, artists can both maintain ownership of their work and gain royalties from sales. Is this the future of contemporary art?

On March 11, 2021, Mike Winkelmann, aka the digital artist ‘Beeple’, sold his artwork ‘Everydays: The First 5000 Days' for $69 million at an online auction hosted by Christie’s.

However, the purchase was made in cryptocurrency (a first for the renowned auction house), and the artwork isn’t a tangible piece of art such as a painting or a sculpture. ‘Everydays’ is a piece of ‘crypto art’ – specifically, a ‘non-fungible token’ (NFT).

So, why would someone shell out $69 million for an artwork that is essentially a JPEG image which can be easily copied and saved to a hard drive?

The key to understanding how value is attributed to NFTs lies in the notion of ‘fungibility’. A fungible good is one that isn’t unique and can be interchanged with another of the same type, such as notes of a currency. Non-fungible assets are unique, and cannot be interchanged as such. An artwork, for example, is unique, non-fungible, and thus possesses inherent value that is open to speculation.

NFT art, therefore, is the meeting of cryptocurrency and the art world, made possible by blockchain technology. In what is now becoming a more accepted medium of commerce, the blockchain acts as a distributed digital ledger that indelibly records all transactions in a publicly accessible space.

Methods to prove provenance and authenticity have historically characterised the art industry, and often in ways that don’t benefit the artist. Longtime blockchain researcher and assistant professor at New York University, Dr Amy Whitaker, believes this is a strong case for blockchain technology in the arts.

“The importance of provenance has probably, in the past, contributed to the centralisation of authority in the arts, whether vested in individual experts or in institutions such as major auction houses. Having provenance records on the blockchain can ease a lot of trade and general record-keeping,” she said.

According to Dr Whitaker, the blockchain allows for verified information without having to trust or rely on record-keepers. This means, ideally, there is irrefutable proof of ownership and authenticity for both prospective buyers and creators of NFT art.

The availability and accessibility of such information allows for the processing of ‘smart contracts’ on the blockchain that ensure artists are more likely to enjoy the fruits of their labour.

This is a primary reason why NFTs have become so appealing to digital artists who often find it difficult to monetise their work. A rising name in the crypto art world, known only as ‘The Lxveless’, shared some of their views on the growing interest in NFTs and what drew them towards it.

“Blockchain technology has definitely helped digital artists, I would say. No doubt about that. Instead of making an art account and hoping to maybe build reputation and relationships drawing commissions, I now can offer my creativity to the world and see how it does in a medium that makes each piece liquid, tradeable, and verifiable.”

According to ‘The Lxveless’, NFTs lend a tangibility to digital art that hasn’t always existed and provides incentives for prospective buyers and patrons. This, in turn, helps artists build their profiles and reputations while making money off their work.

“What I find most interesting here is the way in which artists are using NFT-like structures to claim equity in their work, to share risk across artists, or to redistribute proceeds to charity or other art workers.”

“These structural interventions will take a long time to play out, but they point to really interesting new forms of economic sustainability.”

Sustainability is key, as it’s often a point of criticism when dealing with blockchain technology and crypto-commerce in general. As most NFT transactions occur using cryptocurrency, some find the process too volatile for their tastes.

So, in essence, Dr Whitaker believes it’s still too early to characterise the volatility of crypto-art specifically, as valuing art has always involved volatility. But for the digital NFT artist, is this a concern to worry about right now?

Not necessarily, claims ‘The Lxveless’. “I think art on the block chain is stable. I think that the waves and buzz from those [headline-grabbing] auctions is proof that NFTs are here to stay. I’m not the most technical person, but I am not worried about any platform or blockchain collapsing.”

Despite mainstream caveats about blockchain instability, it appears that NFT art is currently booming as cryptocurrencies rally around Bitcoin’s surging value.

Both Dr Whitaker and ‘The Lxveless’ have pointed out the many advantages of blockchain technology in the arts and how it can both change and evolve the industry.

But what of some of the concerns that have challenged the fine art industry both currently and in the past? It's one that has long been exploited for counterfeit trade, money laundering, and manipulated speculation. Is art on the blockchain still susceptible to such criminal activity?

“This is an interesting question for which the answers are still unfolding,” says Dr Whitaker. “One way – theoretically – to launder money through art is to change the appraisals; for instance, to sell a work for $100 that is then sold back to you or onwards for $200...If there are blockchain records of sales, then these transfers are more visible. Whether the transfers are anonymised or discoverable is a separate question, down to the blockchain platform on which the transfer is made and also the behaviour of the traders.”

Although the blockchain ledger is publicly accessible, the parties on either side of transactions can technically remain anonymous, as cryptocurrency is mainly transferred through specialised (mostly digital) wallets. Therefore, when monitoring a ledger, one can often view the information of the wallets used to process the transaction, but not necessarily of the people behind those wallets.

“For instance, some people create 'burner' wallets so that the outbound transfer is more anonymised,” Dr Whitaker claims. “That’s not in any way to say all anonymising behavior is suspect, just to acknowledge that art has fungible valuation and therefore is theoretically, if not necessarily in practice, more vulnerable to money-laundering than some other assets with tighter accounting strictures and internal valuation modeling.”

Despite the complicated encryption used for blockchain security, there have been many documented cyber attacks. In fact, according to data presented by Finaria.it, crypto-criminals stole $1.9 billion in 2020 (down from $4.5 billion in 2019).

As stricter regulations are handed down and more people engage with the platforms, further processing power is required for blockchains to function securely.

Consequently, there are growing concerns about the carbon footprint of blockchain technology. According to the Cambridge Center for Alternative Finance (CCAF), Bitcoin currently consumes roughly the equivalent annual energy of a small country like Malaysia or Sweden. This doesn’t necessarily account for how much ‘green’ or renewable energy that entails, but still highlights that blockchains do require massive drains on energy consumption to function.

“This is a huge and important area of concern,” according to Dr Amy Whitaker. “Some of the proposed solutions give me pause because they create entry barriers for those who do not already have money. For example, ‘proof of stake’ rather than the more exponentially-intensive ‘proof of work’.”

The ‘proof of work’ model which defines the Bitcoin blockchain has historically allowed cryptocurrencies to be mined by those who have the required processing power. This means as more tokens are discovered and purchased, more processing power is required. Naturally, it has come under fire for being unsustainable as the scale and scope of Bitcoin continues to increase.

However, the ‘proof of stake’ model that is currently being used by the Cardano cryptocurrency and being rolled out on the Ethereum blockchain, is less energy intensive. But it does process transactions based on how much certain cryptominers have already earned, meaning it can potentially shut out newcomers to the industry.

Despite this, Dr Whitaker does believe that innovative solutions are around the corner. “Some of the great minds in the field are working on this problem, and I am cautiously optimistic that there may be solutions that are elegant and also more systems-based or holistic than what we are currently considering.”

How then, does a budding digital artist navigate this issue? When asked, ‘The Lxveless’ was clear to state that they were not the most well-read on the topic, but remained firm that it’s an important concern.

“My stance is that for NFTs and cryptocurrency-fueled systems to prosper, the environmental issues have to be addressed. This new technology has earned many eyes, and for wonderful reasons. Like anything else, it needs to be improved and evaluated, and I have faith that advances in development will help minimise carbon emissions. I think many proponents of crypto believe that this is only the beginning.”

‘The Lxveless’ does have a point - it still is early days for cryptocurrency, NFTs, and blockchain technology as a whole. But as it stands, there is little doubt they are here to stay, and will continue to impact how currencies and financial markets operate going forward.

As for the rising popularity in NFTs and their growing influence on the arts industry, Dr Whitaker maintains they bring significant benefits to artists provided they remain as democratic as possible.

“In its purer theoretical potential, blockchain is as transformative and important a structure as something like democracy or a computing chip. Whether that potential comes to pass depends on how the technology makes its way through the gauntlet of recentralisation and oversight.” 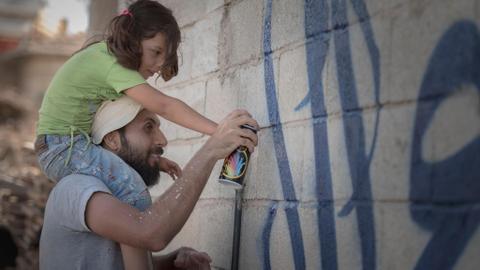