Can we become resilient against automation?

A group of Swiss scientists and economists created an algorithm that can predict the risk of automation for hundreds of jobs and suggest career transitions with minimal retraining.

Silicon Valley, techno-futurists and politicians have argued that we are living on the cusp of an era of rapid technological automation heralding the end of work as we know it.

But does the much-discussed “rise of the robots” explain the jobs crisis that awaits us on the other side of the pandemic? How many jobs will disappear due to automation and how can we make sure that it isn’t our own jobs?

As it turns out, a new study published in Science Robotics offers a way to prepare for that inevitable scenario through an innovative automation risk index.

A team of roboticists from The Swiss Federal Institute of Technology Lausanne (EPFL) and economists from the University of Lausanne combined scientific and technical literature on robotic abilities with employment and wage statistics to develop a method to calculate which currently existing jobs are more at risk of being automated.

Additionally, a method has been devised for suggesting career transitions to jobs that are less at risk of automation and require less intensive retraining efforts.

“There are several studies predicting how many jobs will be automated by robots but they all focus on software robots, such as speech and image recognition, financial robo-advisers, chatbots, and so forth. Furthermore, those predictions wildly oscillate depending on how job requirements and software abilities are assessed,” said Professor Dario Floreano, Director of EPFL’s Laboratory of Intelligent System, who led the study at EPFL.

“Here, we consider not only artificial intelligence software, but also real intelligent robots that perform physical work and we developed a method for a systematic comparison of human and robotic abilities used in hundreds of jobs.”

One key innovation of the study is a novel way of mapping robotic capabilities onto job requirements.

The research team investigated the European H2020 Robotic Multi-Annual Roadmap (MAR), a strategy document by the European Commission, which describes dozens of abilities required from current or future robots, organised by categories like manipulation, perception, sensing, and interaction with humans.

Research papers, patents and descriptions of robotic products were further combed through to assess the maturity level of robotic abilities, using a scale for measuring the level of technology development – or “technology readiness level” (TRL).

For human abilities, the study relied on the O*NET database, which is a resource on the US job market that classifies approximately 1,000 occupations and breaks down the skills necessary for each of them.

After selectively matching the human abilities from O*NET dataset to robotic abilities from the MAR document, the team calculated how likely each existing job occupation is to be performed by a robot.

For example, if a job requires a human to work at millimetre-level precision of movements, robots, which excel at such tasks, then make the TRL level of the corresponding ability very high. Jobs that require such skills are then more likely to be automated than those that require abilities like creativity or critical thinking.

The result is a ranking of the 1,000 jobs by automation risk: Physicists being the lowest risk of being robotically replaced, and Slaughterers and Meat Packers at the highest end of the spectrum. Jobs in food processing, building and maintenance, construction and extraction generally have the highest automation risk.

The authors then created a way to find alternative jobs that have lower automation risk and which are reasonably close to the original one in terms of the abilities and knowledge required, thus keeping the retraining effort minimal and making a career transition more feasible.

“The key challenge for society today is how to become resilient against automation,” said Professor Rafael Lalive, who co-led the study at the University of Lausanne.

“Our work provides detailed career advice for workers who face high risks of automation, which allows them to take on more secure jobs while re-using many of the skills acquired on the old job. Through this advice, governments can support society in becoming more resilient against automation.”

The study’s authors say their methods could be used by governments to measure how many workers could face automation risks and to adjust retraining policies, as well as by companies to assess the costs of increased automation, by robotics manufacturers to better tailor their products to the market needs, and the public to assess the easiest pathway to reposition themselves for the job market. 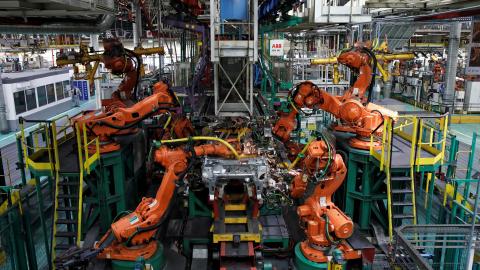