Distrust of Nigerian police grows among women over rape allegations

1
Lack of compromise sets Lebanon down a path of confrontation
2
Racism in Germany: 'I will never, ever, rent my house to someone like you'
3
Ottoman Palestine records present obstacle for Israeli land grab policies
4
Analysis: What keeps Putin in power?
5
Analysis: Egypt’s record on human rights and the media speaks for itself

Several women have alleged that they were raped by members of the police who used plastic bags often used to sell water in little packages in Nigeria as condoms.

ABUJA, Nigeria —  When the news broke that officers of the Nigerian police arrested women and allegedly raped them while they were detained, Chioma Aguwegbo was disappointed but not surprised.

One evening in 2017, at one of the many illegal checkpoints established by officers of the Nigerian police in Abuja, Agbuegbo and her friend were stopped. Agwuegbo’s friend, who was driving at the time, was wearing a short skirt with her thighs exposed and was forced to get out to open the trunk of her car.

“Because she was exposed, I immediately came down to open the trunk of the car because I had longer shorts, but the police told me to get back into the car,” Agwuegbo tells TRT World. Thankfully that was one of the milder interactions had with the Nigerian Police.

While Nigerians took to social media and the streets to protest the arbitrary arrests and deaths of Nigerian citizens by the police in the#EndSARS campaign, the targeted arrests of women in Nigeria's capital city Abuja had been largely unreported.

“To a large extent, the treatment of women as property in Nigeria extends to institutions and their interactions with women,” Agwuegbo explains to TRT World.

Over 65 women were arrested by the police and a task force in a raid of night clubs in Abuja on April 27. In a press conference held by the women in Abuja, they alleged that they had been arrested, asked to give bribes for their freedom and when a few of them could not, they were raped and beaten.

Several women alleged that they were raped by members of the police who used plastic bags often used to sell water in little packages in Nigeria as condoms.

In the end, 27 women were charged with prostitution without access to their lawyers or families and coerced into pleading guilty.

The women who pleaded guilty were sentenced to a month in prison or told to pay the fine of $8.3 [3,000 Naira].

This Abuja incident is a prime example of gender-based violence and sexual harassment against women in Nigeria. The Women At Risk International Foundation reports that over 10,000 girls are raped or sexually assaulted every day in Nigeria and as of 2016, Nigeria had only 18 recorded rape convictions.

Among the abusers are policemen who use their power as a means for extortion —  taking monetary or sexual bribery from women, especially those vulnerable positions. Through extensive interview-based research that Human Rights Watch carried out in 2011, it found that many policemen use the threat of rape and other forms of sexual assault to extort money from women, particularly at checkpoints, in public spaces or those in police custody.

In 2012, Nigerian actress Dorothy Njemanze was arrested with three other women by officers of the same task force and accused of being a prostitute. Despite her arrest, she was never charged. But in a high-profile case, Njemanze took the Nigerian government to court and in October of 2017, the Economic Community of West African States (ECOWAS) court ruled in her favour, ordering the Nigerian government to pay Njemanze and two other women $50,000 (18 million Naira).

“But as a woman in Nigeria, even around law enforcement, there is a serious fear of being sexually molested,” Agwuegbo says.

After the arrests of the women, protests were quickly organised via Twitter and people organised in various cities including Lagos, Abuja, Accra in Ghana and in the United Kingdom.

“As huge as the gaps in policing in Nigeria are, there is a bigger problem of sexual harassment in Nigeria and at the moment, it does not seem like a priority for the Nigerian government,” Ayodeji Osowobi explains. Osowobi is the founder of Stand to End Rape, a non-profit established in 2014 to bring forward conversations about sexual rights in Nigeria.

“We are invested in the creation of a framework to guarantee safety at home and in the workplace for women in Nigeria,” Osowobi tells TRT World. Her non-profit was one of the major players in the protests organised to get justice for the arrested women.

During the planning stage of the protests, the organising groups reached out to inform the police of their protest and to get a security detail, but the response given to them was that the police would not guarantee their safety during the protests.

Already, there is a general distrust of security agencies in the country with ‘peaceful protests’ often turning bloody. In 2018, officers of the Nigerian army shot dozens of peaceful Shia protesters in Northern Nigeria.

While protesting at the front of the police command in Lagos state, Ebele Molua was threatened by a policeman who wanted to “press her breasts”.

“I understood the situation the women were in immediately it was said to me because we were at the police station, the one place we are supposed to be safe, but I was still very scared,” Moula explains.

At the end of the protest, she filed an official complaint to the police, but until today does not know how the case ended. “I got a couple of calls from officers of the police and eventually the man apologising, but I was not told any action had been taken against him,” Moula says.

The protests and their subsequent coverage, however, did not do anything to bring about any change or discussions with regard to policy. Instead, non-profits and people on social media are taking a different approach towards the next generation of Nigerians. Ololade Ganikale, Founder of the Hands Off Initiative, goes around schools in Nigeria teaching consent to teenagers and young adults.

With a network of volunteers across Nigeria and even extending to South Africa and a few West African cities, Ganikale is looking to change the status quo on how Africans see and interact with sex. “I believe [that] if children and young people are made to understand what consent is, there will be a whole generation where cases of sexual assault, harassment and rape will be non-existent,” Ganikale explains.

However, as a largely conservative country it is unlikely that conversations about sex and harassment in Nigeria will be brought up on a national scale. Several older Nigerians including religious leaders believe that it is the proliferation of Western ideas that have led to incidences of rape and harassment in the country.

Nigerian comedian and actor Ime Bishop Umoh released videos on his social media accounts asserting that the women allegedly raped by the police were not raped but stolen from. He argued that they could not have been raped because they are “selling themselves”.

But, the times are changing. Nigeria is currently in the middle of its #MeToo campaign with the church firmly rooted in a scandal. On Sunday June 30, peaceful protests happened simultaneously in Abuja and Lagos at the church whose leader is accused of being a rapist.

While this seems like slow progress, it is still progress. Non-profits and women on Nigerian social media are at the forefront of protests and discussions about women's rights and freedoms. Agbuegbo is excited. “This generation of Nigerian women are ready to scream for their rights and it’s obvious that this is the way we will change the world”. 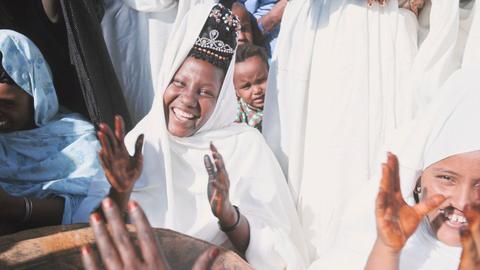 1
Lack of compromise sets Lebanon down a path of confrontation
2
Racism in Germany: 'I will never, ever, rent my house to someone like you'
3
Ottoman Palestine records present obstacle for Israeli land grab policies
4
Analysis: What keeps Putin in power?
5
Analysis: Egypt’s record on human rights and the media speaks for itself