A report published by Human Rights Watch says that in their campaign to quell a Daesh insurgency, Egyptian forces carried out torture, extrajudicial killings and unlawful attacks on civilians.

The Egyptian military is responsible for widespread abuses in Sinai, some of which amount to war crimes, according to a report published by Human Rights Watch (HRW).

In a report published on Tuesday, the group said that fighters loyal to the local Daesh affiliate had also committed “horrific” crimes against locals in Sinai, as well as members of the Egyptian army.

HRW interviewed 54 people between 2016 and 2018 about alleged abuses taking place in the Sinai peninsula, a mountainous desert region that connects Egypt’s African mainland to Asia.

The country has long battled armed groups in the region, but their activities intensified after the 2013 military coup, which brought current Egyptian President Abdel Fattah el Sisi to power.

In 2014, the dominant terrorist group in the area, Ansar Bait Ul Maqdas, pledged allegiance to Daesh leader Abu Bakr al Baghdadi and styled itself as the group’s ‘Sinai province’, or Wilayat Sinai.

For North Sinai civilians, President al-Sisi has brought neither safety nor stability, but rather a rights catastrophe.

A witness who gave his name as Shehab told HRW about the aftermath of a government airstrike.

“When I approached my home, I saw masses of people,” he said. “They were carrying bodies and the wounded outside.

“I found out that my two-story house was hit. My daughter Rahma, 18, was immediately dead. She had just finished her high school and received her results the day before.”

The group also documented at least 14 extrajudicial killings of detainees and cases of death in detention due to ill-treatment.

“Instead of protecting Sinai residents in their fight against militants, the Egyptian security forces have shown utter contempt to residents’ lives, turning their daily life into a non-stop nightmare of abuses,” said Michael Page, HRW Deputy Middle East Director.

Egypt's security forces in North Sinai are using extraordinary brutality against a threat from a local ISIS affiliate, and few people know. Many of the victims are local residents, who face a daily nightmare of abuses. Major @HRW report. https://t.co/Pen1NgsoWz pic.twitter.com/PEgChzdbgY

“This horrific treatment of Sinai residents should be another wake-up call to countries like the US and France that heedlessly endorse Egypt’s counter-terrorism efforts.”

HRW also said that Daesh was committing war crimes against members of the Egyptian military and civilians.

The group documented cases in which the terrorist group kidnapped and beheaded both civilians and members of Egypt’s security forces who disagreed with its extremists views.

It also cited terrorist attacks that the group had carried out against civilians in Sinai, including the November 2017 massacre at a mosque in the northern Sinai village of Al Rawda that killed more than 300 people. 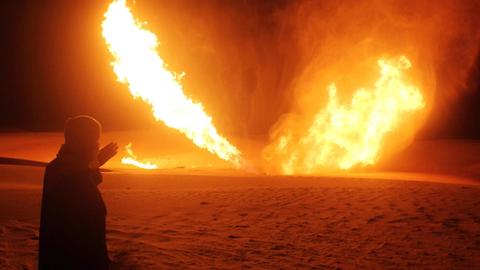