1
Why are Indian farmers protesting for over a year?
2
Armenian landmines threaten thousands of people in Nagorno-Karabakh
3
Armed militias recruit vulnerable children in the Central Sahel
4
Benin Bronzes: The UK’s first institutional return of looted artifacts
5
Total knew it was destroying the planet, but chose to do nothing

The spectre of a right-wing organisation filling another Supreme Court seat could threaten minorities and Muslim communities in the US for decades to come.

The looming presidential elections on November 3, as well as the growing political fight over whether the position vacated by Ginsburg should be filled before or after the election, is set to fire up both parties’ political bases.

The Democrats are attempting to hold the Republicans to a precedent set during the 2016 election, when the then-President Barack Obama attempted to fill a Supreme Court seat. At the time, Republicans argued that the decision should be made after Americans had cast their votes, a move which eventually favoured them.

One organisation above all else will now once again enter the limelight to recommend a list of names to Donald Trump for this, the third vacancy of his presidency: The Federalist Society.

This powerful organisation of conservative lawyers has been an instrumental driving force in helping Trump select previous Supreme Court nominees.

In the US supreme court, as it stands, five of the nine seats are taken by members of the Federalist Society. Trump’s next pick threatens to turn that into six, a remarkable achievement for an organisation started by some students 1982.

So, who is the Federalist Society?

They have been described as the “single most influential organisation in the conservative legal world” and step by step, they have amassed immense clout in the fraught and politically charged world that is the US justice system.

Their political philosophy has been described as “right-wing” and “ultra-conservative”, serving as the “conservative pipeline to the Supreme Court.” The membership of more than 70,000 has steadily consolidated its hold on the US justice system under the current administration.

While appointments to the US Supreme Court have garnered high profile coverage, it is the society’s influence in the lower courts, which hears more cases and decides on more matters, that could have a more lasting influence.

The Trump administration has by some account subcontracted judicial appointments to the Federalist Society - the result has been dramatic.

To date, Trump has appointed more federal appeal court judges than any other president at this period in their term. They make up almost a quarter of the 792 active judges - a point Trump has often parroted proudly.

What are their views?

In an op-ed defending the Federalist Society, one of its members argued that the organisation has “no articles of faith.”

It sees its mission as correcting the mistakes that the “liberal legal establishment” has made over the decades, and if possible, to reverse them. Those conservative-leaning members, and the organisation’s close affiliation with consecutive Republican administrations, has revealed the group’s leanings.

The organisation has in the past been accused of giving a platform to white nationalists to speak at their events.

Yet, the impact its members have on US citizens is unlikely to be dredged from a tweet sent years ago or a Facebook post that reveals the politics of the future justices.

Brett Kavanaugh’s confirmation hearings resulted in allegations of sexual assault being levelled against him. These resulted in a contentious and deeply political hearing that has proved a blemish on the Federalist Society’s otherwise smooth nominations.

“We have the tools now to do all the research. We know everything they’ve written. We know what they’ve said. There are no surprises,” said Leonard Leo, Co-Chairman of the Federalist Society of lawyers they put to fill positions throughout the judicial system.

Once appointed, the judges interpret the law in ways that also reflect their judicial philosophy and the party that appointed them.

In 2018, the conservative justices of the US Supreme Court delivered Trump a political victory when they upheld the “Muslim travel ban”.

In a 5-4 decision which split the court along conservative and liberal lines, the majority opinion was that Trump could ban travel from Muslim countries. His past history of inflammatory statements was not enough to stop Trump’s executive order from being implemented.

The ruling emboldened the President, and for many activists and campaigners, normalises a political climate towards minorities which can have deadly results.

If the Trump administration and the Federalist Society appoint a third justice, the court will shape the fate of millions of Americans for decades to come in ways that will become pronounced with time.

The willingness of the Trump administration to push and stretch established norms, now also has a new and more emboldened ally - an increasingly conservative US justice system that will provide the necessary legal cover to shape American society. 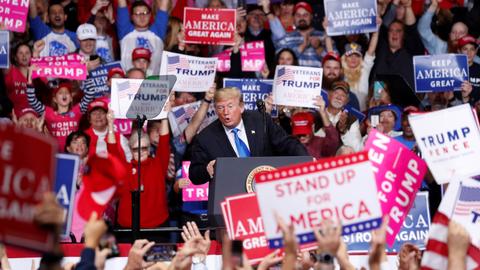 1
Why are Indian farmers protesting for over a year?
2
Armenian landmines threaten thousands of people in Nagorno-Karabakh
3
Armed militias recruit vulnerable children in the Central Sahel
4
Benin Bronzes: The UK’s first institutional return of looted artifacts
5
Total knew it was destroying the planet, but chose to do nothing