For ordinary Sri Lankans every day is a battle

With food costs rising and no fresh supplies of petrol coming in, Sri Lanka continues to be in a debilitating economic crisis since earlier this year.

COLOMBO – It’s more than 30 degrees Celsius in Lunuwila, a tiny town about 56km outside Colombo.

And it feels even hotter indoors, under the metallic sheet roof of B Dedunu Priyangika’s home.

But Priyangika, 35, and her three daughters are not using the fan while watching television in their living room. With electricity bills doubling this month, the family must cut back as much as they can.

Even the washing machine is used less frequently.

“Everything is expensive, so what can we do?” she asks.

Her husband, a painter , has had few jobs recently, and Priyangika works part-time in a nearby grocery store.

With food costs rising, and lack of petrol and cooking gas resulting in long queues, Sri Lanka has been in a debilitating economic crisis since earlier this year.

According to a UN estimate, about five million people or 22 percent of the population are  in need of food support.

Experts blame the crisis on a number of factors; the drop in tourism which is a large driver of the economy, falling remittances, swelling government debt, political mismanagement, and a brief ban on chemical fertilisers that hit agricultural output.

In recent months, angry citizens took  to the street and toppled the country’s prime minister and president, but the economic woes show no signs of abating soon.

How is all of this playing out on a day-to-day basis in the households of ordinary citizens?

In the rural west of the country, life is a series of small adjustments and constant rejigs. A change in diet, fewer meals and incessantly thinking of how to tackle the large bills.

In Priyangika’s home, milk-less ginger tea has become a standard feature. For the past three months milk powder has often been used as a substitute.

In Lunuvila, every home is struggling to beat the myriad of challenges; from unemployment or the inability to travel for work, to disrupted education and the heightened daily cost of living.

“Everything has changed,” says AS Lalani Swara.

“Food has changed. Travel changed a lot. Buses aren’t working either,” she says. They also fear looting. “We can’t even go on the streets. We are in fear.”

The 65-year-old  and her family skip breakfast at times, and have minimised the use of the fan.

Their two pet dogs are also feeling the pinch of smaller portions she says.

They now use firewood for cooking, foraging it from their garden in the absence of gas.

Most families have turned to cooking this way, either sourcing the wood from their surroundings, or buying from the local grocery store, where it is now retailed for LKR 50 to 100 ($o.14 to $0.28) per bundle.

“We sell about 10 bundles a day,” says Shirly Perera, 51, a shopkeeper in the village.

Priyangika’s brother-in-law Indike Liyanadura, lives a few doors down from her. Though he works as a carpenter, he has had little work in the past two months.

His motorbike idles, for want of fuel. “Everyone is unhappy with this government,” he says.

But as a master tinkerer, Liyanadura, 42, has managed to seize an opportunity in this crisis.

In a country where bikes are now among the most valuable commodities, in short supply or double in price, Liyanadura has taken to building them at home.

“Because of the oil crisis there are people who want bikes,” he says.

“But spare parts are also hard to source so making them has been slow.”

For these families small luxuries have become unthinkable: many spoke of foregoing biscuits and cheese, getting by on milk powder, and cutting down on the consumption of chicken and fish.

Pranando’s problems don’t end there. For a week her young daughter has not had proper medical attention for a urinary problem because there is no fuel to go to a hospital.

“We took the child to a nearby doctor, they just looked at the reports and said that there is no problem. But the child cries,” she says. “They gave a pill but it’s not working.” Now they hope to take her by cycle to a nearby hospital, about 9km away.

For most men in this village, spendings days and nights in petrol queues has become a reality.

“Sitting and sleeping on the motorbike, I am now used to that,” says BA Chinthaka Rumesh, 36 who has gone three or four times and received two litres of petrol each time.

Bhavya Dore is a Mumbai-based freelance journalist who has written for Caravan, Quartz, Scroll, Forbes, Hindu, BBC, Mint, ESPN and others. Her reporting in Sri Lanka is being supported by the IWMF. 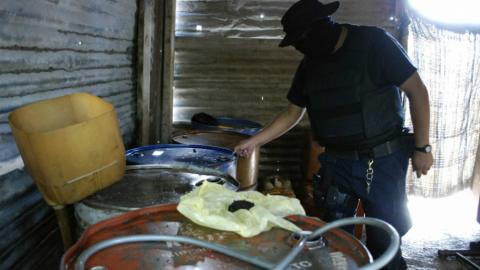