The death of an African-American man in police custody sparked heated protests across the US and a discussion about bias in police treatment towards protestors.

Civil rights protests continue on the streets of Minneapolis, in the US, demanding justice for George Floyd, a 46-year-old black man who died at the hands of a police officer on Monday 25 May.

The protests were initially peaceful, however, heavy-handed measures by the police in their use of tear gas and rubber bullets resulted in the protests turning ugly.

Online users have drawn comparisons with the reaction of police officers to the, predominantly white, anti-lockdown protests that have swept the US since April.

On April 17, President Donald Trump declared on Twitter that Michigan, Minnesota and Virginia needed to be liberated going on to say that the US constitution was under siege.

Trump’s call was heeded in the main by his supporters who were seeking to tear down what they perceived as the tyranny of medical advice and the face masks that came along with it.

The resulting protests saw semi-automatic weapons brandished by white protesters demanding state lockdowns, meant to combat the spread of the coronavirus, should be lifted despite medical advice to the contrary.

The police reaction to armed-anti lockdown protestors was largely muted, even as some of the protestors seemed to deliberately approach police officers as close as possible without wearing face masks.

The US has the highest rate of coronavirus infections at almost 1.8 million and the death rate recently crossed 100,000.

Protests in Minneapolis calling for an end to police brutality against African-Americans were met by a distinctly different police posture: gas masks and batons.

Gun-toting anti-lockdown protestors in camouflage carrying semi-automatic weapons made a point not to socially distance.

In contrast, protestors marching for George Floyd were also preoccupied with maintaining social distance and the wearing of face masks.

Online users who commented on the stark double standard shown by the police towards protestors of colour, were not seeking greater police violence towards anti-lockdown protestors who were mainly white, wanting instead to protest in peace.

The escalation from police was a stark demonstration in the disparity of treatment which for many obviously had a racial component.

the stark — and sickening— differences in police response to the George Floyd protests vs. armed anti-lockdown protests // via @therecount pic.twitter.com/HqcwD8nPZy

The protests have spread in other US states with comparisons being drawn between the death of George Floyd and that of Eric Garner who was killed six years ago after being placed in a chokehold by a police officer.

Garner’s last words “I can’t breathe” became a rallying cry for the Black Lives Matter movement which swept the US demanding justice for people of colour killed in police custody.

Floyd’s last words were also “I can’t breathe” as he pleaded with a police officer to remove his knee from his neck.

After several minutes of pleading, he stopped talking and was later pronounced dead at the hospital.

Police had initially stopped Floyd for an alleged forgery. 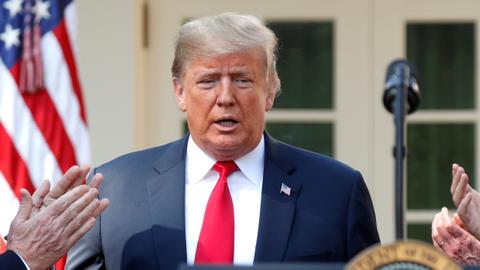