Locked in a military stalemate between an internationally recognised government in Tripoli and a rival regime led by warlord Khalifa Haftar, the conflict in Libya has gone through some significant changes in the past few weeks.

The Tobruk-based government's resignation on September 13 came as a surprise to many regional observers, as it weakens the standing of its ally Haftar who has been desperate to gain political legitimacy through strongarm tactics and the support of his foreign allies, especially the UAE and Russia.

Abdullah al Thani, the head of the self-titled government, submitted his resignation to Aguila Saleh, the speaker of the Tobruk-based House of Representatives, as protests over the deteriorating civic conditions and rampant unemployment rocked the region.

“Al-Thani's resignation might not weaken the LNA militarily but undermines Haftar's bargaining position diplomatically and also causes disruption for Saleh's efforts to insert himself as a decisive diplomatic player in the conflict,” Samuel Ramani, the Middle East expert and a DPhil candidate in International Relations at St. Antony’s College, University of Oxford, told TRT World.

The resignation came at a time when the representatives of two rival sides had engaged in talks in Morocco and Egypt. A parallel round of talks were to be held in Geneva in the following weeks.

According to Libyan media reports, the negotiators engaging in Geneva have agreed on holding elections by the end of 2021  based on a mutually agreeable constitutional framework.

The future course of the talks will be shaped by the changing realities. With the sudden outbreak of protests in Tobruk dealing a blow to Haftar's ally Saleh and to the ambitions of their main backers, the UAE, Haftar's militias opened fire on protesters in the Marj province, leaving one person dead and several others injured.

Libya expert Ramani said Haftar relies heavily on external support from the UAE, Russia and other international actors, and al Thani's resignation may not affect him militarily much but it does "deprive him of a critical political ally at a time when peace negotiations on Libya are active."

Al Thani played a key role in communicating Haftar's propaganda to Arab countries - this includes the claim that he is "liberating" Tripoli from extremism or responding to an immediate threat to Libya's sovereignty, Ramani added.

Libya has been embroiled in civil war since the ouster and killing of its longtime ruler Muammar Gaddafi in 2011. The Government of National Accord (GNA) was founded in 2015 under a UN-led agreement, but efforts for a long-term political settlement failed due to a military offensive by forces loyal to Haftar.

The UN recognises the government headed by Prime Minister Fayez al-Sarraj as the country's legitimate authority. Tripoli has battled Haftar's militias since April 2019 in a conflict that has claimed thousands of lives.

Ramani said that the GNA will be watching these developments cautiously, as al Thani had offered to resign previously (a particularly notable attempt occurred in 2015), only to swiftly return to power once the immediate pressure on him was lifted.

“The 2020 Libyan protests which have contributed to al-Thani's fall occurred in both GNA-held cities, such as Tripoli and Misrata, as well as the LNA's strongholds, which suggests a broader dissatisfaction at the popular level.”

Ramani thinks “al-Thani's departure is a symbolic win for the GNA's bargaining position, but GNA officials will be watching the fallout from it with concern.”

Turkish security analyst, Abdullah Agar, echoed a similar view, saying the GNA may gain by al Thani's resignation on a diplomatic front but it may not mean much from a military standpoint as long as Haftar is financed and armed by international actors such as the UAE and Russia.

Agar said the GNA is likely to halt its military operations in the hope of cultivating peace through negotiations.

“Any further conflict will be massively devastating for the country,” Agar said, adding that foreign players continue to arm Haftar with hi-tech war gadgets and heavy weapons. 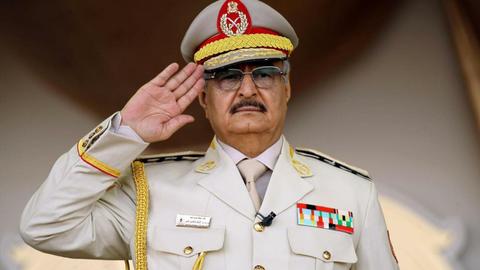