To some, the EmDrive violated the basic laws of physics. For others, it promised efficient space flight beyond our solar system and galaxy.

The hyped-up EmDrive, which allegedly produces thrust without propellant was debunked by a test at Dresden University, proving it produced no thrust at all.

But in other settings, the ‘revolutionary’ propulsion drive seems to have produced tiny levels of thrust, giving researchers from NASA and the US Defence Advanced Research Project Agency (DARPA) hope that the puzzle could still be solved.

In theory, the patented drive traps microwaves in a closed chamber. As they bounce around, they seem to produce thrust without any input. When the idea was first shared with the scientific community, it seemed to be too good to be true.

Unfortunately, the EmDrive is not even close to being accepted by the physics community. The issue? It seems to violate the law of conservation of momentum, which says momentum in a closed system is constant. In other words, you can’t lift yourself from your bootstraps, and you can’t move your car forward by kicking the windshield.

In spite of the results and wide controversy surrounding the drive, many scientists continue to work on it, if only because of what it might mean to the human quest for space travel.

Among them is David Burns, an engineer at NASA, speaking to the New Scientist.

Traditionally, space flight propulsion has been concerned with making engines more efficient and reliable, and working within the limits of physics.

The calculus is pretty straight forward, as propulsion engineers ask the same questions. How much force can a rocket produce to escape the earth’s considerable gravity? How can it be streamlined and made safer and more efficient?

The industry has seen transformative changes since SpaceX entered the scene, with their introduction of stronger and bigger engines and lower spaceflight costs through self-landing rockets.

Among propulsion scientists, however, are a few daring souls who try to imagine the next engine and discover the physics that would make it possible.

For Burns, NASA engineer, the EmDrive is worth exploring, and could bring space travellers to 99 percent the speed of light with enough time and power.

To do that though, he says it would have to be massive: 200 meters long and 12 meters wide. In their experiment, inputting 1 megawatt of power let  them generate 1 Newton of thrust. If  they measured it properly.

One newton of force, is enough to move 1 kilogram, 1 meter per second. That’s not much. But in frictionless space, that’s a different story.

With enough energy, it could theoretically take you up to 9.5 years to accelerate 1 kilogram to within a hair of the speed of light. But there’s a caveat. As you get closer to the speed of light, it would cost more and energy and time to increase your speed.

At the heart of the controversy is a disagreement about measuring the EmDrive’s output, and accounting for possible interference.

NASA’s Advanced Physics Propulsion Laboratory and a group of scientists in China claim to have produced force. Their detractors claim the results are clearly wrong. Their supporters claim we’ve possibly stumbled on a new branch of physics.

Even NASA’s 1 newton of thrust per megawatt is deeply promising though, surpassing the performance of current ion drives already in use by most deep-space craft.

In case you were wondering, ion drives are real, even though they look like something out of a sci-fi flick. They came in a variety of forms. For plasma drives, for instance, neutral gas is ionized by removing some electrons from a cloud of injected gas to make it mostly positive, after which a current is run through them, causing them to be dispelled. Other ion drives repeat the same process with other variations.

Ion drives consume 1 to 7 kilowatts of power, and can reach velocities of 20 to 50 kilometres in space. Because they rely on a finite amount of gas, they’re more useful for one-way deep space probes that want to build up acceleration and coast in one direction. The drive uses noble gases, which are difficult to find in space, making a scoop or ramjet-styled spaceship unfeasible.

The EmDrive has been the recipient of scathing criticisms, referred to as a ‘BS Drive’, or mocked with references to ‘magic space unicorns’. With established physics on their side, it will take solid findings to prove that it works, but even then will destroy our current understanding of physics.

At its heart, scientists have to prove how waves in the EmDrive gain momentum and continue to bounce off the inner chamber’s walls with no energy input.

The German scientists who debunked the EmDrive reproduced the same alleged thrust NASA scientists had initially achieved. After pioneering a new suspension system for the drive, the thrust measurement dropped off to zero, they said in an interview with German science magazine GreWi.

How did they explain the discrepancy?

“When power flows into the EmDrive, the engine warms up. This also causes the fastening elements on the scale to warp, causing the scale to move to a new zero point. We were able to prevent that in an improved structure. Our measurements refute all EmDrive claims by at least 3 orders of magnitude,” they report.

Nonetheless, the German team claims that the controversy surrounding measurement has advanced science further. While they weren’t able to prove the EmDrive can work, scientists around the world have devised more accurate measurement methods for experiments, setting the stage for new concepts and discoveries that could have eluded researchers because of their subtle phenomena.

For scientists at DARPA and NASA who continue to work on the drive, bold visions of spaceflight beckon.

Mike McCulloch, who works for DARPA, presents a dream where spacecraft take off silently from launchpads, with minimal effort. If the drive works, he predicts being able to make a trip to the closest galaxy in 90 years

For those who cling tightly to the diminishing possibility that the EmDrive may still be built one day, just because something is impossible, doesn’t mean it will always be impossible. What if a core concept or idea to make it work eludes us for the time being. To them, that means it shouldn’t be discounted altogether.

For now, there’s no limit to the number of wacky space propulsion concepts out there in need of testing. Some have already been discarded.

In 1961, the Canadian and American Departments of Defense tested Project HARP, short for High Altitude Research Project. The secretive project, postponed once because of the Cuban missile crisis, tried firing objects into space using a massive 40-meter gun. In 1966, the cannon shot a 180-kilogram payload at 3.6 kilometres per second, reaching an altitude of 180 kilometres.

Another old concept that is seeing a revival was Project Horizon, which sought to build a military base on the Moon, eventually planning for most major space flights to take off from there.

An even older concept developed in the 1960s used “nuclear pulse propulsion”, which theorized that by dropping nuclear bombs on a timer out of the spaceship's back end, the detonation could bounce off plates meant to catch the force, and effectively push the spaceship further. The ship would have to enjoy a high level of hardening against the electromagnetic pulse a nuclear bomb would produce, and employ extremely heavy shielding to protect its crew.

At the time, the cost of lifting so much heavy material to space made the idea unfeasible. More recent concepts include solar sails propelled by lasers targeting them from earth or the sun, but the concept runs into problems the further it gets away from space, and has no solution to keeping the sails safe from fast-travelling micrometers and debris in space.

Finally, a sci-fi classic, is the generation ship. Built to endure long voyages over at least a hundred years, this poses an ethical problem that still enjoys divisive debate. If the first generation consciously chooses to risk their lives to fulfill a mission, that’s their call.

Life on a generation ship would not be easy, and poses risks from stellar radiation, possible system failures. Ethicists say caste systems would arise, as leadership and labour responsibilities would likely stay in families.

Genetic drift is also a risk, as well as in-breeding. A ship containing enough genetic diversity to prevent in-breeding would need at least 50 people, with reproduction strictly controlled by geneticists.

More recent additions to the generation ship concept suggest sending genetic material to be incubated and delivered upon arrival, raised and educated by machines. But would they still be human, if they were raised without the affection and physical touch of a mother? Psychological research done on former USSR orphanages in Ukraine indicates that children that aren’t touched regularly as babies can develop severe emotional effects, including never learning intimacy or love.

Unlike what’s often depicted in popular culture and the movies, space is a dangerous place, and much of the technology required to safely navigate it doesn’t exist yet.

For some, that’s unfortunate. For others, we’re living through a space revolution, and it's only a matter of time before humanity spreads throughout the stars. 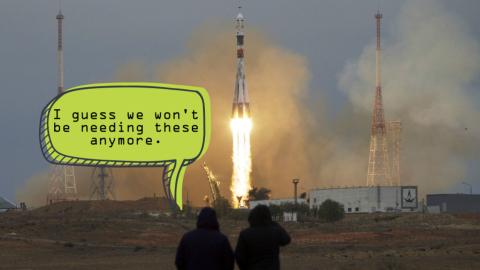 Can the EmDrive make space travel possible without fuel?