More than a million Chileans have taken to the streets calling for reforms of the country’s economic structure but it was a hike to metro fares that proved the spark for unrest.

Mass protests erupted last week in Chile after a proposed three percent hike to the metro price, which the government later overturned.

“The events that triggered all of this going on have to do with the price hike in the subway fare in Santiago that occurred two weeks ago” explained Chilean academic Rodolfo Disi Pavlic.

He said that the government and minister said things which angered Chileans.

“The minister of the economy said if people don’t want to pay as much then they should wake up earlier, so they pay the lower rate; without really acknowledging that many people in Santiago wake up at 5 in the morning or earlier just to get to their jobs everyday.”

Carmen Gloria Tudela Farias is a 35 year old psychologist. She says the issue of public transport is sensitive in Chile, especially for many marginalised sectors of society.

“There are poor people who live on the outskirts of Santiago who were excluded from the capitalist centre, so they have to take a long journey to work,” she says they are the ones who would have paid the real price for the proposed measure.

The issue struck a nerve for many Chileans, leading many to reflect deeply on their society and what many perceive as the rising social inequality - from the general cost of living to low salaries and poor services.

“You have a country that’s supposed to be stable and prosperous and reaching economic development but behind that you have a lot of grievances related to injustice - related to how wealth is distributed. How there are so many people that live pay check to pay check and not even that, many people use their credit cards to pay for food, phone and electricity bills,” said Pavlic.

He said initially students began fair dodging at the start of the last week. By Wednesday many college students joined them as things escalated, as workers joined them on Friday.

“It’s easier to frame issues dealing with injustice, with the unequal distribution of income and wealth when you have a right-wing or centre-right government,” said Pavlic.

“You have a president who is a billionaire and government ministers from backgrounds in corporations and big companies,'' he said.

Macarena Bustos, 30, is a nurse working in the public healthcare system and like many on the streets she feels there is a social divide.

“It’s been an awakening for the Chilean population in terms of the powerful abuses from politicians and businesses gaining from our efforts of working.”

“Chile has awoken” is the chant which rings out at protests across the country.

In Santiago, Chile’s capital, largely peaceful protests have taken place across the city which sits in the backdrop of the Andean mountains. One key area for protests is Nunoa. Some remnants of the disturbances are visible on route to the square. A car dealership was torched and several cars lay burnt out next to it.

“One of the things I’m not very happy about is the amount of looting and the destruction of public and private infrastructure. No-one has seen that level of destruction since the 80s,” said Pavlic.

In the plaza of Nunoa, a swell of Chileans of different ages are carrying banners expressing their indignation, calling for President Pinera’s resignation or decrying the role of the state forces.

On the key themes across the protests are the ‘cacerolazos’, the banging of pots and pans in defiance. One protestor’s banner reads: ‘our wooden spoon against your bullets’.

There are different groups gathered together, many with Vuvuzelas, drums and raucous chants against the authorities and saying “long live Chile”.

'Right to live in peace'

On route to Plaza Italia, central Santiago, which is a bigger protest spot, the military closely guard metro stations. Authorities say 20 were torched by protestors.

In one Chilean home, the owners are letting their feelings be known, as ‘derecho de vivir en paz’ or right to live in peace by the sing-songwriter and political activist tortured and murdered in the dictatorship booms out in defiance.

“The only time we’ve seen this was during the coup d’etat from the dictatorship of Pinochet and for many people seeing this brings back memories - anger to see the military on the streets, to see how they repress people,” said Alexi Lawrence Diez, a 30 year old engineer, referring to the unrest.

According to reports 8 people lost their lives in fire-related incidents and around 19 in total have reportedly died.

"There are many disturbing things at the heart of this, which need to be investigated,” he said.

The UN has called for an independent investigations. According to Chile’s National Institute for Human Rights five deaths were caused by armed forces and it has received allegations of torture by security forces.

In Santiago, the local media reminds people of the curfew times, which vary each night, as Chile moves into its sixth night. Military carriers, police cars and unmarked cars patrol the streets during curfew.

“One big slogan that has come out of these protests is ‘It’s not 30 pesos, it’s thirty years’. We’ve been a democracy again since 1990 but the structure of the system did not really change in essence since the dictatorship,” said Pavlic.

“What politicians can do is rely on coercion. That’s why Pinera declared a state of emergency so early on Friday. It didn’t take long for him to bring the military into this,” adds Pavlic.

In Plaza Italia there are many different groups and individuals gathered from the ultra fans of one of the Santiago football teams, to members of Chile’s indigenous Mapuche community.

Rodolfo Melin, is a 19 year old Mapuche student who has brought the flag of his community to make his voice heard. The Mapuche have struggled in Chile and Argentina to maintain their ancestral lands.

“I have a cousin whose head got hit by a pellet from the police. He’s there in the hospital where he’s spent the day. I’m here supporting the people of Chile. “

He said his father and grandfather couldn’t come so he wanted to be present for them.  He feels Pinera is just going to patch things up and is not going to resolve the deeper societal problems.

“This will last a year and we’ll be back where we are. We need a structural change at parliament,” said Melin.

Pinera initially declared that the country was at war but on Tuesday he later proposed some changes.

“It was incompetent of Pinera to say we’re at war. People had grievances. They protested, banging pots and pans, making noise. Nothing more than this. I see that Pinera is doing whatever he likes,” said 30 year old student Juan Carlos Mercado Rojas .

"I think he’s managing the situation like the businessman he is - Pinera is a businessman. He’s not a politician as such. He’s shut off inside with six to eight people, who are defining the future for Chile. He’s not listening to people. He’s only focused on his way of doing things,” said Juan Carlos.

For some Pinera’s proposals weren’t enough and were too late, not going far enough for a country where many Chileans say there is an unequal distribution of wealth.

“All of the things that were offered last night are not tackling the structural issues. They improve peoples’ situations somewhat but don’t really change the model upon which the economy and society is based”.

Juan Carlos said he is protesting as he is crippled by his student loan.

“I pay 120 to 130 dollars a month and I have 18 years left and it’s going up. It’s a price which goes up. My struggle is down to taxes, life is expensive, transport is expensive, going to buy food.”

Juan Carlos said he had to take out a loan, which is a similar situation for many Chilean students.

“It’s the option I had to take in order to be able to study. I couldn’t have studied without a loan. My dad couldn’t pay for me. We have the most expensive educational system in Latin America.”

In Plaza Italia Ignacia Arrospide and Francisa Retes are two physical trainers who have lent their services to people who may have an injury. There have been skirmishes between some police and protestors.

“The hope is that we can all see each other as brothers, the person beside me is a friend, my family. All of us are suffering,” said Ignacia.

Despite many of the incidents, many Chileans now feel that the situation in the country has brought them closer than before by reflecting deeply on the underlying issues.

“Today we are not part of a political party.  We are one society - there is no difference between us,” said Macarena. 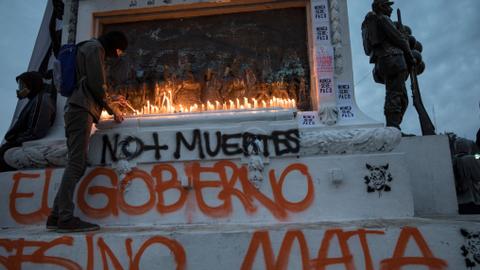 Inside Chile’s largest mobilisation since the end of the dictatorship