Is the boycott of Israel working?

The activists who managed to keep the Boycott, Divestment and Sanctions movement alive are now facing difficult times under the Trump presidency.

One day late last year, Professor W J T Mitchell saw his caricature on posters, depicting him as  a terrorist sympathiser, appear in various parts of the University of Chicago campus, where he has been teaching English and art history for years.

Mitchell is a vocal critic  of Israel's military aggression in Palestine.

And the man behind the poster campaign targeting him was a little-known activist, David Horowitz, who runs anti-Muslim propaganda websites such as the jihadwatch.org, which is known for making xenophobic calls to demonise Muslims.

For about two years, Horowitz's name has popped up for running smear campaigns against academics and students at several American universities.

Mitchell doesn't seem to care much about such attacks. As a matter of fact, he finds it amusing.

“… done me the favor of making me look like Salman Rushdie, which I presume means that I am now the target of a Horowitz fatwa,” he wrote in response to the defamatory poster, referring to his picture that made him look like the famous author.

Mitchell is a permanent faculty member at the University of Chicago, where he edits a respected academic journal, Critical Inquiry. He says he's been friends with leading intellectuals and scholars such as the late Edward Said.

The posters also carried the names of students and untenured teachers, some of whom had just started their careers. Even a mention of terrorism alongside their names could  undermine their job prospects.

“I had a teach-in in the fall of 2017, where I invited students whose names had appeared on the posters. Several of them were very upset. One student said she had made over a hundred applications and received only two interviews. And she had never had difficulty finding work before,” he told TRT World.

In recent years, students and academics who have attended rallies or used the internet to voice support for the Boycott, Divestment and Sanctions (BDS) movement against Israel, have come under scathing defamatory attacks.

Often, they are accused of anti-Semitism and linked to Hamas. These attacks are part of a well-financed Israeli propaganda machine, several clusters of NGOs, think tanks and individuals like Horowitz.

A website, Canary Mission, even posts personal information of students, warning companies against hiring them.

BDS, a loose network of NGOs and activists, was not a headache for Israelis during the first few years after it was launched in November, 2005, by various pro-Palestinian organisations.

As The Economist noted, it was derided as the “scheming of crackpots.”

That changed as it slowly and gradually brought the issue of Israeli atrocities to the mainstream and pressed governments and private organisations to boycott Israel.

Where once people relied solely on news organisations for information, social networking websites allowed activists to post pictures of Israelis cheering at the death and destruction in Palestine during the 2008-09 Operation Cast Lead.

BDS is credited for discouraging international actors, musicians and athletes from visiting Israel — the latest example being that of the Argentinian football team’s cancellation of a friendly match with Israeli players ahead of the ongoing football World Cup 2018.

“Israelis are terrified. They seek acceptance especially in Europe. Anything that seems to them as isolation, scares them,” an Israeli academic who supports BDS, told TRT World.

She asked not to be named because of the increasing attacks on Israeli liberals who support the BDS movement.

The government of Israel led by Prime Minister Benjamin Netanyahu is using its diplomatic muscle to counter BDS. It has lobbied many US states to introduce laws that punish American citizens who boycott Israeli products.

It is also attempting to get controversial legislation, the Anti-Semitism Awareness Act, to sail through US Congress.

If the bill is passed by the US Congress, any criticism of Israel could be linked with anti-Semitism, undermining the efforts of pro-Palestinian activists, experts say.

Netanyahu’s government has poured millions of dollars to fund the anti-BDS initiatives.

Israel’s Ministry for Strategic Affairs and Public Diplomacy is accused of funding software applications that defame pro-BDS activists over the internet.

Some commentators question if Israel, an economic powerhouse in the Middle East, has taken BDS way too seriously especially given how the acrimonious history of the Jewish country has come to shape its character.

Even before Israel declared independence in 1948, it came into confrontation with its Arab neighbours as it began displacing thousands of Palestinians from their villages.

The Arab League boycott prohibited direct trade with Tel Aviv. It also banned multinational companies that traded or invested in Israel — known as the secondary boycott.

“Almost all the major Japanese and Korean car manufacturers — including Honda, Toyota, Mazda and Mitsubishi — complied with the secondary boycott, and their products could not be found on Israeli roads,” wrote Dan Senor and Saul Singer in their book “Start-Up Nation: The Story of Israel’s Economic Miracle.”

Beside a trade embargo and reluctance of multinational corporations to invest in Israel, Tel Aviv  also faced difficulty in striking defense deals with other countries — such as the French embargo of the 1960s.

The isolation prompted Israel to focus on making products and services that cannot be identified easily or are difficult to replace, such as integrated computer circuits and optical sensors used in digital cameras.

In particular, Israel ramped up military research and development  spending, which enabled it to train engineers, many of whom subsequently went on to start businesses in surveillance and cybersecurity industries.

Dany Bahar, a David M Rubenstein Fellow at the Brookings Institution, wrote a paper on BDS’s impact on Israel’s economy  and says it is difficult to say with certainty what role boycotts have played in reshaping the Israeli economy.

But “the investment in defense, and in particular, in defense-related R&D has — I’d say — been an important input in Israel’s ability to become [a] hi-tech exporter,” he told TRT World.

Israel is high on the list of countries that have the most companies listed on the tech-heavy Nasdaq stock exchange and exports sophisticated products and services to countries around the world.

While many Arab countries still don’t trade with Israel, they no longer use their clout to discourage international companies from investing there.

The United Arab Emirates (UAE) and Saudi Arabia have even warmed up to Israel and are seen as clandestinely cooperating with the Jewish state to counter their mutual enemy — Iran.

It was a shock for many when cycling teams from UAE and Bahrain participated in Giro d'Italia in Jerusalem —  an event that the BDS movement campaigned against.

But that hasn’t stopped activists discouraging foreign firms from investing in Israel, especially if they are interested in  putting their money on the illegal Israeli settlements built on the occupied Palestinian territories.

One such example is that of French utility giant Veolia, which was forced to pull out investments from Israel in 2015.

Among the activists who played a crucial role in that campaign was Dutch national Adri Nieuwhof, whose own parents had suffered at the hands of the Nazis.

‘I know how it feels’

Nieuwhof grew up in the Netherlands hearing stories of Nazi atrocities during World War II. She read books and watched documentaries about how some Dutch people collaborated with the Germans in deporting Jews.

“That’s how I learned it’s important to speak against injustice.”

In the 1970s during her university years, she took part in anti-apartheid campaigns against South Africa. “In the beginning there was just a small group of people. Dutch people felt that they were protesting against their brothers. Apartheid is a Dutch word.”

BDS takes inspiration from the struggle against the apartheid South African regime, which segregated black people and discriminated against them in every aspect of life.

Multinational companies active in South Africa back then had become a particular target for activists. A movement against British bank Barclays saw students campaigning for mass withdrawal of deposits.

So when Israel began work on a light railways project in Jerusalem that primarily aims to benefit Jewish neighborhoods, BDS activists launched a campaign against Veolia, which was involved with the project.

Activists in Europe — France, Netherlands and Sweden, lobbied with the local municipal councils to cancel their own contracts with Veolia, and multiple lawsuits were filed.

“It was really a collective effort,” says Nieuwhof. “It’s really about doing your homework and sharing information like ‘oh I was in West Bank and I saw a landfill of Veolia’.”

BDS, however, was not able to stop the Jerusalem Light Railway (JLR) project. Another French company, Alstom, continues to sell its services for maintaining the tracks.

“For us it’s impossible to stop every project. But what we can do is to make the price higher [for Israelis] and end complicity of our companies in such grave violations,” she says.

At least for now, activists like Nieuwhof, believe that what’s more important than a complete victory is the persistence and determination to keep the movement going.

And Israel is giving a lot of ammunition to the activists to rally around. “You have racism, but when it’s enshrined in law, it’s deeply wrong,” she says.

Israel relies on “apartheid laws” to discriminate against Palestinians and its own Arab citizens.

In 2003, the Israeli lawmakers passed legislation, Citizenship and Entry into Israel Law, which bans its Arab citizens from marrying people from Palestinian territories of the West Bank and Gaza and imposes strict conditions on family reunification.

“It comes down to inequality between the Jewish and Palestinian people. Any jew can come to Israel and get a passport. But the law doesn’t allow Palestinian residents of Israel to bring their spouses, children or parents.”

One aim of the law is to keep the demographic balance in favor of Jewish citizens of Israel, she says.

“It is also used to stop the BDS activists and supporters of the movement from coming to Israel.”

There was a time in the 1990s, when Palestinians and Israelis seemed to be making headway towards a two-state solution, says Mitchell, the Chicago university professor.

That changed in the years following the Oslo Accords as peace efforts between the two sides broke down and Israel rapidly expanded illegal settlements in  Palestinian territories.

Israel now occupies some 60 percent of the West Bank territory, something that has almost killed chances of a separate Palestinian state.

BDS does not campaign along the political aspect of the Israeli-Palestinian conflict. All it wants is dignified treatment of Palestinians and the Arab Israelis.

In the US and elsewhere, people like Mitchell, Nieuwhof and the Jewish Israeli activists continue to back BDS activities.

But US President Donald Trump is making things harder for them. Despite opposition from most of the world, he recognised Jerusalem as Israel’s capital.

It’s also during the Trump presidency that right-wing fearmongers such as Horowitz have come out of hiding, says Mitchell.

“They are attacking the most vulnerable — students and untenured faculty.”

An earlier version of this article wrongly attributed a quote about Citizenship and Entry into Israel Law. It was Adalah lawyer Sawsan Zaher who gave the interview and not Mati Milstein. 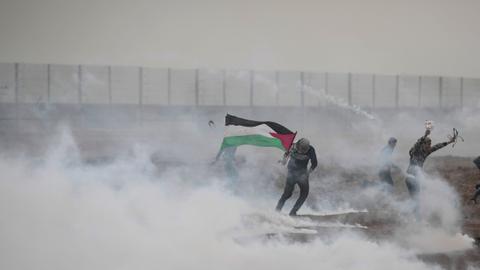 Is the New Israel just the old South Africa?

Why are global arms industry flourishing despite Covid-19 pandemic