Normalisation should not come as a surprise – unofficial ties between Israel and Morocco have existed for decades.

The news of Morocco’s normalisation with Israel makes it the fourth Arab country in the space of three months to agree to a US-brokered deal to establish official diplomatic ties with the Jewish state, on the heels of similar pacts made by the United Arab Emirates (UAE), Bahrain and Sudan.

What distinguishes Morocco’s deal from the other three are the deep historical links – spanning over six decades – the North African kingdom possesses with the Jewish state.

Although Moroccan authorities historically downplayed any relations, commercial links have existed for almost 60 years in the realms of military and intelligence, technology, and agriculture.

“The announcement is not surprising: ties between Israel and Morocco have been relatively strong for decades. Morocco was a one-time hub of Jewish life in the region and the King has increasingly embraced Jewish Moroccan heritage, naming senior Jewish advisers to his government and, most recently, incorporating Moroccan Jewish history into school curricula.”

“There is already more than $30 million in annual trade between the two countries, tens of thousands of Israelis travel to Morocco annually, and Israelis from Morocco can already retain Moroccan citizenship.”

Between 2014 and 2017, the two had engaged in $149 million worth of trade, making Morocco among Israel’s four top African trading partners.

One of Israel’s first overt foreign investments in the Arab world came in 2017 when Israeli agricultural tech giant Netafim set up a $2.9 million subsidiary in Morocco.

According to a report published just hours after its normalisation, Morocco is set to ink a deal to purchase advanced drones from the US, suggesting a possible connection with the progress of the arms sale with Morocco’s decision to normalise ties with Israel.

Growing concern by the Moroccan people, whose support of the Palestinian cause has been unwavering, have seen public contestations to growing normalisation trends in recent years.

Alongside African, Andalusian, Mediterranean influences, Morocco’s revised 2011 constitution states that national unity has been enriched by its “Hebrew heritage”.

The country remains home to the largest Jewish community in the Arab world, numbering around 2,000.

According to Claire Spencer, a senior research fellow at Chatham House’s Middle East and North Africa Programme, “Morocco values its international Jewish connections” and is likely to be “the only Arab state to have a roving ambassador for Jewish affairs, Serge Berdugo”.

Indeed, ties between the Moroccan Jewish diaspora and the country remain strong.

Each year, some 50,000 Moroccan Jews come to visit the country and it is commonplace to have hotels reserved entirely for Moroccan Jews over Easter, as well as for weddings.

When Morocco’s King Hassan II took power in 1961, Israelis embarked on a highly successful effort to cultivate him. After Israeli agents embedded themselves with opposition leader Mehdi Ben Barka, they informed Hassan of a plot to overthrow him.

From that moment on, years of covert security cooperation would be ushered in.

In 1965, when Arab leaders and military commanders met in Casablanca, Morocco allowed Mossad to bug their meetings and private residences – tipping off the Israelis with information that would become vital leading up to the 1967 war.

Gen. Shlomo Gazit, a former Israeli military intelligence chief, claimed those secret recordings of Arab leadership discussions in the runup to the Six Day War were crucial in revealing how splintered and unprepared the Arabs were for war.

Mossad then had a hand in luring Moroccan opposition leader Barka to Paris on the request of Moroccan intelligence, where he was abducted and tortured to death.

In the lead up to the 1978 Camp David accords, King Hassan and his government became the back channel for secret meetings between Egyptian and Israeli officials, ahead of the normalisation between the former political foes.

During the 1980s when King Hassan II appeared to gesture towards normalisation with Israel, he faced a powerful backlash from both Moroccans and the Arab world – ultimately forcing him to backtrack from his attempt and maintain bilateral collaboration discreetly.

Israel’s historical relationship with Morocco could be viewed through the prism of its grand strategy known as the “periphery doctrine”, which was advanced by then-Prime Minister David Ben-Gurion and his advisers in a search for regional allies against the “Arab core” (originally understood as a coalition of states led by Egypt).

These allies have been both countries and ethnic or religious minorities within countries and have at various times included Turkey, the Shah’s Iran, Ethiopia, Sudan – along with Morocco.

The doctrine was primarily adopted by the Israeli intelligence community and eventually became internalised in Tel Aviv’s strategic thinking. 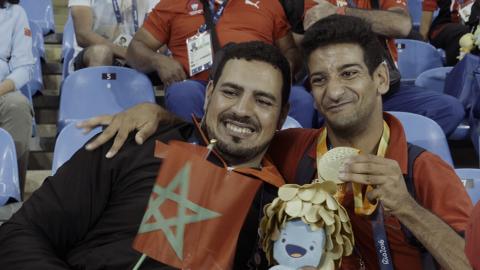