The Latin American state had agreed to ‘absorb’ 60,000 Palestinian Muslims as a counterweight to Communists.

Israeli intelligence officials planned to transfer tens of thousands of Palestinians to the Latin American nation of Paraguay as part of a secret plan to tighten Israel’s occupation of the Palestinian West Bank, according to newly discovered documents.

A journalist from Israel’s state broadcaster, KAN, made the discovery in minutes of an Israeli cabinet meeting in 1969.

While Israel has occupied the territories ever since and built settlements in them to further tighten its grip, the areas contained huge Palestinian and Arab populations that were the responsibility of Israel.

Addressing ministers in the meeting, Israel’s prime minister at the time, Golda Meir said: “We have to make a decision...it is very important that everyone agrees on it.”

Under the plan, the Palestinians would be given $100 each for living costs for their new lives in Paraguay, whose government would receive $33 per arrival in addition to an initial lump sum of $350,000.

As part of a deal agreed to by the Israeli intelligence service, Mossad, and Paraguayan President Alfredo Stroessner, 60,000 people would arrive in the Latin American state as part of the plan.

Stroessner wanted Palestinian Muslims as they were not inclined towards the communist ideology he was fighting at home.

Those Palestinians who agreed to come would have been given Paraguayan citizenship within five years. Israel was not ready to accept the return of all of those who were resettled.

All the territories captured by the Israelis in 1967 remain under their effective control. With the exception of Gaza, which has been besieged by Israel since 2007, all host considerable Israeli settlements.

The founding of Israel led to the permanent expulsion of more than 700,000 Palestinians from land that is now recognised as Israel proper.

Those expelled and their descendants now number around 7.2 million people, the majority of whom live as refugees in the occupied Palestinian territories, Lebanon, Jordan, and other states. 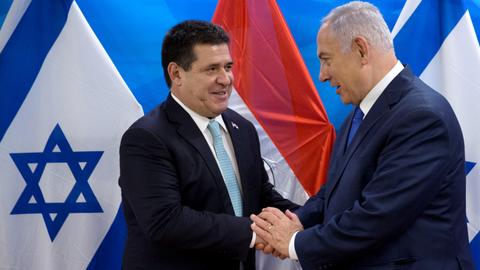 The two faces of Tzipi Livni - war criminal or peacenik?