More than a hundred thousand Ethiophian Jews have moved to Israel since 1984 in secret operations, and now 2000 more are set to relocate. But the politics behind it is murky.

The Israeli government approved a plan on October 12 to airlift Ethiopian Jews to Israel in the coming months.

The country’s Law of Return entitles all Jews the right of Israeli citizenship, but the return of Falash Mura, the Jews of Ethiopian descent, whose ancestors converted to Christianity a century ago, has become a contentious issue. They’re not recognised as fully Jewish and don’t have the right to citizenship under the Law of Return.

Although the long-awaited arrival of 2000 Ethiopians Jews has been welcomed by the community in Israel, they say it’s far from what is expected. The community insists on the settlement of all Ethiopian Jews.

Will they be accepted?

Around eight thousand Ethiopians are waiting to migrate to Israel, while a large number of them are living in camps in Gondar and Addis Ababa in Ethiopia. Waiting in camps for about two decades, they want reunite with their relatives in Israel.

The minister of immigration and absorption, Pnina Tamano-Shata, is the first Ethiopian Jew to become a minister in the country - oversees the policy of bringing the Ethiopian Jews to Israel. Budget constraints was the reason she cited to explain why only 2000 Ethiopian Jews were being hosted in the country —  a justification that current and retired Israeli Ethiopian officers find insufficient.

“It is unfathomable that the immigration from around the world continues, while quotas and limits are only placed on immigration of Ethiopian Jews,” the officers said in a letter reacting to the government’s decision.

The State of Israel was built in 1948 on the founding principle of building a home for exiled and persecuted Jewish people. But Israel’s Interior Ministry doesn’t officially accept Ethiopian Jews on the grounds of their forefathers having converted to Christianity. Ethiopians who seek to settle in Israel say they have reverted to Judaism and deserve a space in the Zionist homeland.

Since the 1970s, tens of thousands of Ethiopian Jews have been brought from Israel in secret operations by Israel’s state intelligence agency Mossad, which was following the orders of then Prime Minister Menachem Begin.

In 2015, Israel approved a plan to bring the remaining Ethiopian Jews from the camps by 2020, but the plan could not materialise. While the government cited budget constraints as the reason behind the delay, critics say the darker skin tone of Ethiophian Jews played a role in slowing down the immigration process.

“The skin colour is one of the points that created doubts about them. They’re black. How people from Israel became black? For us, it’s not a question,” Mecahjem Waldman, a rabbi who is an expert on the Ethiopian Jewry, previously told TRT World.

Tracing the origins of Ethiophian Jews is challenging due to a lack of reliable sources, but some claim the lost Hebrew Dan tribe is where they hail. Others say they may be the descendants of the Israelite tribes who came to Ethiopia with Menelik, the son of King Solomon and the Queen of Sheba.

Another theory suggests Ethiopian Jews are a byproduct of an ancient Jewish exodus from Egypt, when a band of Hebrew Israelites headed south rather than to the Sinai desert, ending up in Ethiopia. Many consider this historic account as a "founding myth" of the Israelites.

Ethiopian Jews, known as Beta Israel, suffer from poverty, unemployment and often complain about discrimination based on their skin colour. The Israeli government's integration efforts are still insufficient and the lack of public empathy towards them adds to their daily woes.

In July 2019, thousands of Ethiopian Jewish protesters took to the streets in Israel after an off-duty officer gunned down a young man of Ethiopian origin. That was the latest of the protests led by fatal police shootings in recent years.

The community members say they live with the constant fear of police harassment because they’re seen as potential suspects due to their skin colour. They also face more arrests and incarcerations compared to other Israeli citizens. 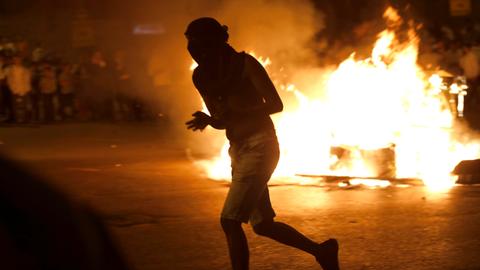