1
Over 800 children separated from families in eastern DRC clashes
2
Whats at stake for Big Tech if antitrust laws are passed?
3
What’s expected from the upcoming G7 summit?
4
American labour woes: Why more power to workers might not work for Biden
5
What's next for Macron after losing his parliamentary majority?

The longstanding fear of Palestinians that Israel is slowly eroding the status quo of the Al Aqsa mosque is becoming real.

The Israeli government is discreetly allowing Jewish people to conduct prayers at the al Aqsa mosque compound in occupied East Jerusalem, a move that risks a longstanding compromise aimed at staving off conflict, New York Times reported on Tuesday.

Tel Aviv-based Times of Israel also reported in July that Israel was quietly letting Jews pray at the site, also known as Temple Mount, under the watchful eyes of Israeli police.

Traditionally, Jews were only allowed to visit the compound, but not conduct any prayers there as they prayed at the Western Wall below. In 1967, Israel captured east Jerusalem, including the compound and the takeover was recognised as an occupation by the international community.

In 1967, Israel signed an agreement, allowing the al Aqsa compound to be governed by the Jerusalem Islamic Waqf, which is controlled by Jordan. Israel meanwhile oversees the external security of the site.

“What is happening is a blatant and dangerous violation of the status quo,” said Sheikh Omar al-Kiswani, a top official at the Waqf, the Jordanian-backed Islamic trust that administers the site. “The Israeli police must stop providing protection to extremists.”

Networks in July earlier aired the footage of daily sessions being held in the compound. Now the Times said Rabbi Yehudah Glick has made “little effort to his prayers” by live streaming them.

Such a practice was barred on security grounds.

Rabbi Glick, an American-born, right-wing former lawmaker, has been leading efforts to change the status quo for decades. He describes it as a matter of religious freedom, the Times said.

Palestinians and the site’s Islamic authorities who previously complained about Jewish worshippers performing prayers in the compound indeed intended to break off the status quo of the site. They fear it signals Israel’s attempt to take full control of the area, or partition it, as happened in the case of Ibrahimi mosque in Hebron.

Revered by Jews as the Tomb of the Patriarchs, the site was segregated between Muslim and Jew worshippers in 1994, after a US-born Israeli settler walked into the mosque and killed at least 29 Muslim worshipers during Ramadan Friday prayers

The Jerusalem site is sacred to both Muslims and Jews. Israel however only considers the al Haram al Sharif mosque as the Al Aqsa mosque, which is only one section of the wider compound. Extremist groups in Israel have long sought access to the Al Aqsa compound, seeking to build a temple that would likely result in the iconic Dome of the Rock, sacred to Muslims, being demolished.

Any attempt to change the status quo of the site is likely to trigger violence in the compound, which has been the epicentre of tensions.

The latest major violence in the compound took place in May, Israeli soldiers raided the al Aqsa Mosque, attacking worshippers inside, triggering an 11-day assault on besieged Gaza Strip.

In July, Israeli Prime Minister Naftali Bennett said he was committed to protecting “freedom of worship”, but then his office clarified his statement saying that the status quo was holding. This angered Israel’s hard-line, nationalist wing.

For decades, Jews have been avoiding entering the entire area for religious reasons including out of concerns to protect religious impurity. The Jewish prayers performed in the compound also signal a change in religious interpretation of the site by ultra-Orthodox Jews.

The status of Jewish prayers at the time started to change under previous Prime Minister Benjamin Netanyahu, one activist advocating for Jews to pray in the site told AP. 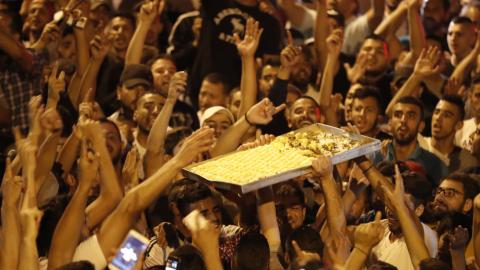 1
Over 800 children separated from families in eastern DRC clashes
2
Whats at stake for Big Tech if antitrust laws are passed?
3
What’s expected from the upcoming G7 summit?
4
American labour woes: Why more power to workers might not work for Biden
5
What's next for Macron after losing his parliamentary majority?