1
Gaza | Storyteller
2
‘The possibilities are endless’: Designing a human-centric Metaverse
3
Lebanon’s 2019 crowd mounts challenge to old political elite
4
Lebanon heads to polls amid fear and hope
5
Why anti-French protests are going on in Africa’s Chad

After the killing of a Lebanese man by a Syrian in the town of Bcharre, locals came out to vent their anger against Syrians, attacking refugees and setting homes alight.

Tensions between locals and Syrian refugees have come to a head in a northern Lebanese town after a dispute between a Lebanese man and a Syrian resulted in the death by gunshot of the former.

Locals in the town of Bcharre, some 65km northeast of Beirut, came out onto the streets demanding that security forces handover the Syrian youth suspected of the killing, as church bells rang out across the town.

They demanded that all Syrians be evicted from the majority Christian town before going on a rampage; attacking passerby and burning down houses suspected of belonging to Syrians.

According to the New Arab, Bcharre’s mayor Freddy Keyrouz issued a statement calling on Syrians who are in the town ‘illegally’ to leave immediately and further asked security forces to conduct searches of buildings believed to house Syrians in order to look for weapons.

A separate statement putout by community leaders which was broadcast on local television channels asked Syrians to leave until the town could work out a way to host the community.

The situation demonstrates the tense circumstances many of Lebanon’s Syrian population of around 1.5 million people have to endure.

A vast majority of those fled war and abuses carried about by the Assad regime in their home country. Many also do not have the formal right to work in Lebanon meaning they have to take up menial unrecognised labour, depriving them of the protections afforded to legal workers.

With the economic crisis in Lebanon, which was further compounded by the global coronavirus pandemic, the least well off Syrian refugees have found it even harder to make ends meet.

In early November, a 58-year-old Syrian man set himself alight outside the UN High Commissioner for Refugees (UNHCR) centre in Beirut, reportedly in anguish over his living conditions. Around 74 percent of Syrians in Lebanon are living below the poverty line according to the UN.

A majority of Lebanese people are also living under the poverty line and in many instances Syrian refugees have become a punching bag for those looking for someone to blame over their economic plight.

Such anti-Syrian rhetoric has often come from the highest levels of Lebanese society, including the country’s Foreign Minister Gebran Bassil, who once tweeted:

“We will not be replaced in this land which bore prophets and saints; Not a refugee, nor a displaced person, nor a corrupt person.”

Bassil, who is the son-in-law of Lebanese President Michel Aoun, separately called on the international community to help his country return Syrians to their homeland, a place that continues to be ravaged by war, terrorism, and the brutal rule of the Assad regime.

Since the refugee crisis began, a number of videos of Syrians being abused by Lebanese nationals have gone viral, including one where a man encourages his children to beat a Syrian child and another of a man abusing and torturing a Syrian boy.

Some observers have suggested that the animus towards Syrians may be in part motivated by the fact that most come from conservative Sunni backgrounds and are therefore seen as  both “culturally insular”, as well as “religiously backward” when compared to Lebanese people, particularly those who are Christian.

That is not to say such sentiments are anywhere near universal. When Foreign Minister Bassil made his comments in 2019, many Lebanese people were quick to respond with protests and condemnations.

Lebanon and Syria despite their recent history share a number of cultural similarities, especially when it comes to cuisine, history, and linguistics. 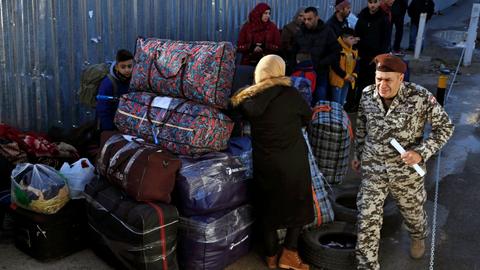 1
Gaza | Storyteller
2
‘The possibilities are endless’: Designing a human-centric Metaverse
3
Lebanon’s 2019 crowd mounts challenge to old political elite
4
Lebanon heads to polls amid fear and hope
5
Why anti-French protests are going on in Africa’s Chad