A joint open-source investigation visualises patterns of indiscriminate aerial attacks by the Saudi-led coalition since 2015.

A platform that tracks airstrikes in Yemen has been launched in a collaborative investigation documenting human rights abuses in the war-torn country.

The platform consists of an interactive map that charts where and when the airstrikes took place, since the Saudi and UAE-led aerial campaign began on March 26, 2015.

At least 8,759 Yemeni civilians have been killed in a series of indiscriminate and disproportionate attacks carried out by the Saudi-led coalition (SLC).

Each mapped incident includes a date, location, summary, and open-source links to corroborate the attack. Airstrikes are through four categories: those on hospitals, schools, civilians and civilian objects, and places of cultural significance.

It is also possible to filter by whether remnants of munitions were found, there were civilian casualties, and if there were consecutive attacks on the same target.

The map also exposes the role Western arms companies and governments have played in supporting and arming the SLC bombing campaign. It does this by identifying the relationships between documented airstrikes, remnants of weapons, and a timeline of arms exports from certain EU countries to the coalition.

Users can filter by confirmed or potential relation of a specific company according to the remnants found on ground. Airbus, BAE Systems, Dassault, Raytheon and Thales are some of the companies to feature in the data set.

The platform is the first project undertaken by Berlin-based Investigative Commons, a ‘super hub’ pooling together open-source, legal and investigative experts to examine human rights issues.

It’s technical development was led by Forensic Architecture, which applied its own dynamic Timemap software that visualises geospatial events to build an interactive cartographic platform. It was then bolstered with information acquired from extensive field research, open-source investigation, and legal analysis.

Over the course of the six-year conflict in Yemen, the SLC has acquired substantial logistical support, surveillance capabilities and armaments from the US as well as the UK and EU.

Seeing as the project is EU-based, Forensic Architecture believes the platform can serve as a tool for civil society to comprehend the role of the European arms trade in the war.

“In this way, actions in Europe by countries and arms companies that had seemingly no clear ties to Yemen can now be read as being entangled with and even fueling human rights violations against Yemeni civilians,” it said.

Bellingcat hopes that by doing so, the map’s creators can “show these decisions were not made in a vacuum, but rather in the midst of a bombing campaign which has demonstrated a clear pattern of targeting hospitals, civilians, and cultural heritage.”

The project will be ongoing, with more data expected to be added as more airstrikes are investigated. 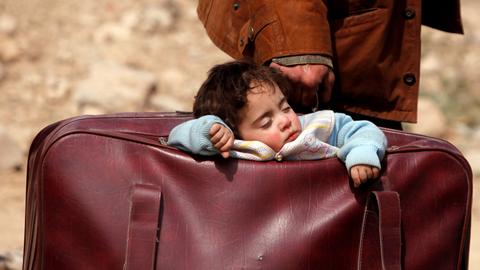