Lagos's state government left 30,000 people homeless after authorities brutally set fire to their homes. The authorities were working hand-in-hand with developers on lucrative projects with little concern for court rulings or the rights of the poor.

LAGOS, Nigeria — Christina Gbenu goes everywhere with four dolls tied to her wrapper, a traditional piece of colourful cloth that is worn around the waist in Nigeria.

The dolls symbolise her four dead children. They died in November 2016, when the state government carried out a violent demolition of Otodo Gbame, an urban slum that had long existed in the heart of Lagos. At least 13 people were killed in the devastation and several dozen injured. By April 2017, the entire slum of 30,000 inhabitants was flattened.

Gbenu tells people that the ghosts of her two sets of twins haunt her sleep at night, appearing in her dreams vividly, as though they were still alive. She says the ghosts of children do not rest in peace, because they died too young.

"I was sitting inside my shop when policemen walked up to me," Gbenu tells TRT World, sitting on a stool over the ruins of Otodo Gbame.

Prior to the demolition, Gbenu says she was a "petty trader," selling cooked food, snacks and drinks out of her home.

"They came with guns and other harmful weapons," she says. "I was so afraid, I ran away without the children. When I went back, they had set fire to my building. I lost my two sets of twins [who were inside the house]."

The loss of her children has had a massive psychological and emotional impact on her. Her eyes are bloodshot and heavy with weariness.

Otodo Gbame was built on top of a lagoon, with endless shanties held up by bamboo sticks and cheap wood. Its roofs leaked when it rained. But its location made it desirable in the eyes of real estate developers. Situated in Lekki Phase 1, an exotic high-end area that is home to some of Lagos' richest people, they viewed the slum as a potential source of great commercial value – the only barrier being its poor and powerless inhabitants.

Soon after the demolition, the speedy construction of what looks like an luxury estate began, erasing the remnants of the community that, locals say, had survived there for over 200 years.

The state government was ruthless, working hand-in-hand with developers to flatten the Otodo Gbame slum. Even a court ruling last November asking the state to restrain from continuing demolitions was violated in March, when several dozen shanties were bulldozed in the contentious area.

Isaac Hassan, a furniture maker, was at work when the government forces knocked his house down. "When I came back, it was dark everywhere, the house had been razed. I couldn't find my wife and children. They had jumped into the water to protect themselves," Hassan says.

The Lagos state authorities defended the demolition drive, calling the community a "ticking time bomb, an environmental hazard and a den of armed robbers."

The government's spokesperson, Steve Ayorinde, declared in a press release that the Otodo Gbame dwellers will not be allowed to return to the area or to erect shanties and "perpetuate unsanitary and environmentally dangerous conditions."

He degraded the entire settlement as "illegal, without any title or appropriate government approval."

But the Justice and Empowerment Initiative, a non-profit organisation that has worked extensively in the community, calls the government's argument a ruse.

"This is their home in Lagos," Megan Chapman, who is the co-founder of the NGO, tells TRT World. "These people have lived on that land for centuries and have nowhere else to go."

Chapman says since the state embarked on the demolition campaign, they have come up with various conflicting excuses as justification.

But it's not just the government which came down heavily upon the slum dwellers. Oba Elegushi, a powerful Lagos monarch descended from the traditional ruler of a pre-colonial kingdom named Ikateland who is trying to reinvent his kingdom as a modern-day real estate fiefdom, reportedly dispatched a vigilante group to the slum on November 9, 2016 with machetes and other dangerous weapons. After storming in, they began to burn houses in the community.

Chapman says the police arrived shortly afterwards and joined Elegushi's men to pull down houses with bulldozers and excavators, shooting into the crowd and preventing residents from dousing the fire.

"At least 15 police vehicles were on the ground and the Police Commissioner Fatai Owoseni arrived at the scene in person for ‘inspection' and to order the community sealed," says Chapman.

During that demolition, Chapman says about 11 people drowned as they jumped into the lagoon to avoid being attacked. The residents say more than 11 lives were lost in that fiasco.

The same pattern was repeated on April 8, 2017. Elegushi's men invaded the community again and attacked men and women. They shot dead one resident, Avonda Elijah, who attempted to engage in a scuffle to stop them.

The next morning, the government forces showed up with sledgehammers and bulldozers. They opened fire at the protesters and lobbed teargas canisters at them, chasing them into the water.

"They were shooting at us and then the police entered board, pursuing us further into the lagoon," says Tina Edukpo, the slum resident.

The police shot at three residents, including Monday Idowu. The 16-year-old was hit in chest. He survived the wound.

But Daniel Aya was not so lucky. The 20-year-old was shot in neck as he tried to salvage his family's belongings. He lost blood and died on the way to a hospital. He is survived by a wife and two children.

Homeless and scattered all over Lagos, the survival of the slum dwellers is at stake. "Economically, we have been affected," says Celestine Ayisu, a fisherman from the community. "My business, everything is ruined. We cannot feed ourselves, it has not been easy for me as a father."

Ayisu's children are living with his cousins because he's unable to put bread on the table.

In June, presiding Justice S.A Onigbanjo declared the evictions without adequate notice and resettlement to be cruel, inhuman, degrading treatment and in violation of the right to dignity enshrined in section 34 of the Nigerian constitution.

But the state government was unmoved, ridiculing the judgment as an "error" that encourages "illegal shanties and crimes such as bunkering, kidnapping and armed robbery."

"Demolishing communities doesn't make the environment cleaner," Chapman, the co-founder of the NGO, says. "It doesn't solve security problems, it doesn't eliminate slums, because the people, as we are seeing now, are displaced from one slum and they go to another place because water must find its level."

Gbenu has now moved to Sogunro, another one of the 16 informal waterfront settlements in Lagos. Yet there is a real risk that Sogunro might also face the same fate as Otodo Gbame, meaning she might again be displaced. For now, however, she lives there with the ghosts of her children, wondering if and when her new abode will be taken over by the government that is bent on making Lagos a megacity. Ogechi Ekeanyanwu is a journalist and gender advocate based in Lagos, Nigeria.

The lifelong consequences of a little-known Nigeria-Cameroon land dispute 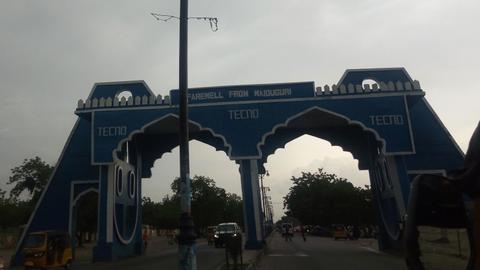