The American publication received ire for digging up the past of David Bennett, the first man to receive a pig heart transplant successfully.

The New York Times divided social media users when on Thursday it reported on the criminal record of David Bennett, the man who recently received a pig’s heart in a landmark surgical procedure.

It was related to a crime that Bennett, 57, committed 34 years ago. In 1988, when Bennett was in his 20s, he stabbed Edward Shumakar multiple times in a fit of jealousy.

Shumaker was paralysed from waist down and spent the rest of his life in a wheelchair, in and out of nursing homes, until he died in 2007 at the age of 40.

Bennett was sentenced to 10 years in prison after he was convicted on the charges of battery and carrying a concealed weapon. But he was released after six years.

The NYT story headlined, “Patient in Groundbreaking Heart Transplant Has a Violent Criminal Record”, brought an immediate ire of readers on Twitter.

People questioned whether it was right to highlight a patient’s previous criminal record when he’s already going through a health crisis.

“So what, the doctors should have let him die?” asked a Twitter user.

So what, the doctors should have let him die? https://t.co/lLSdYij03z

“This is an awful headline. Salacious and NOT NYT worthy,” wrote a Facebook user Veronica Christina.

The Washington Post first published the story of Bennett’s criminal record. After that, however, it was the NYT article, which was doing the rounds on Friday afternoon Turkiye time. On Facebook, the story had received more than 2,500 comments.

“Literally thought this was the onion... Can we please stop acting like people with a criminal history or a history of incarceration are somehow less human. This surgery is unbelievably groundbreaking and important and could potentially mean that thousands less people die every year. His history has nothing to do with it,” said Facebook user Holly Tarnower.

Surgeons at the University of Maryland Medical Center performed the groundbreaking operation on December 7 after they received an emergency use authorisation from the US health regulator, the FDA.

The heart, which Bennett received, came from a genetically modified pig. So far attempts to implant an animal organ into a human have failed. Doctors and scientists at the University of Maryland School of Medicine have used novel drugs and therapy to ensure the pig heart and Bennett survive.

Absolutely appalling. A sick, ailing man just had a pig's heart transplant. Historic moment for science. New potential for his life. The @nytimes dedicates an entire article to expose-in detail- a *34 years old* crime of his & question whether he deserves to live. Appalling. https://t.co/LlSoZ2WVyd

While the hospital has not disclosed the cost of the procedure and postoperative care that Bennett will get, TRT World has learned that it comes to around $1.2 million.

Bennett was suffering from a severe heart ailment and would have died within a few days without a heart transplant.

Because of his poor health, age and relatively less chances of survival, he didn’t qualify for a human donor heart. There are tens of thousands of much healthier and more eligible people on the waiting list of organ recipients.

Doctors then proposed that Bennett volunteer for the pig heart transplant procedure, which had not been performed on a human before.

If Bennett walks out of the hospital in about two months time, he’d be the first man in history to receive an animal organ successfully. The breakthrough surgery can help save thousands of lives around the world as millions wait for kidneys, liver and heart.

In a statement to The Washington Post, the University of Maryland Medical Center said “a decision was made about his transplant eligibility based solely on his medical records.”

Even though Bennett had served his time in prison and was acquitted, the rationale to place convicts on the organ transplant waiting list has been a thorny topic in the US.

In 2002, a 31-year-old man serving time for armed robbery became the first prison inmate to receive a heart transplant in the US.

At the time, the decision to put him on the organ donor list had started a debate as some people opposed spending public money on criminals' healthcare.

Medical experts have pondered over the question if it’s appropriate to remove criminals and inmates from organ donor lists.

But as researchers argued in a 2008 paper in the American Medical Association Journal of Ethics that prisoners and convicts are eligible to receive equal consideration for organ transplants by a physician.

The United Network for Organ Sharing (UNOS), the organisation that manages the organ transplant waiting list, says “excluding those convicted of crimes from receiving medical treatment, including organ transplants, is illegitimate.” 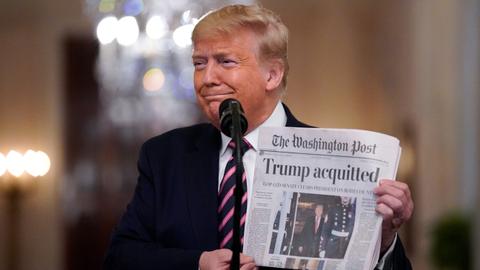