1
How Aafia Siddiqui’s case symbolises 'the lies' of War on Terror
2
How Bangladesh police are hounding families of ‘enforced disappearances’
3
6 ways to recycle your old Christmas tree
4
How the internet's leading account on Palestine maintains its message
5
Beset by financial woes, Afghan embassies struggle in limbo

Young musicians from the community are combining tradition with Western influences to reclaim and redefine their roots.

Late at night at an overbooked venue in the heart of Islamabad, Pakistan, a young audience dances wildly to the beat of a Peshawar-based instrumental band. Some seem to have fallen into a trance while others clap and whistle enthusiastically. On stage, guitarist Aamer Shafiq spins his head as the song keeps picking up its pace. If it wasn’t for the Western attire of the audience, the concert could almost resemble an ecstatic Sufi ceremony. The band Khumariyaan’s music is a combination of the rubab, a traditional lute-like instrument indigenous to Central Asia, and guitars, creating an intoxicating, fast-paced fusion of the East and the West.

Not too long ago, all of this would have been unimaginable Peshawar. The Pashto language music scene in the city was almost nonexistent, and the Taliban had banned music for  many areas, forcing traditional musicians to flee the northwestern province of Khyber Pakhtunkhwa. The rest of the country listened to mostly Bollywood and Urdu language songs, showing little interest in this region.

Enter Khumariyaan. Their blend of contemporary music with traditional Pashtun influences has taken Pakistan by storm in recent months, giving hope to the youth from the country’s marginalised and militancy-hit northwest.

Pashtuns, who live on both sides of the Afghan-Pakistani border, are an ethnic and linguistic minority in Pakistan. For over a decade, they have suffered the effects of the war on terror being fought in their backyards, becoming victims of terrorism, army operations and deep-rooted prejudices in Pakistani society.

But now Khumariyaan (Pashto for “the intoxicated ones”) and other similar bands are bridging gaps in society.

Sparlay Rawail, the lead guitarist of Khumariyaan, was instrumental in bringing about this change. Now known to the entire country, he casually walks into a trendy café in Islamabad in a t-shirt and jeans with his long hair tied back and a small fluffy dog following him on a leash. Like the other members of the band (Shafiq, Farhan Bogra and Shiraz Khan), he belongs to the small educated Pashtun elite.

The band members met each other while studying at the university in Peshawar in the mid-2000s. Rawail met Farhan Bogra, the band’s rubab player at a jam session.

“[Bogra] realised there are a thousand and one rubab players out there playing the same thing, all these well known, old traditional tracks. When he listened to the guitar, the chord structures and the patterns, he sort of morphed his style to accommodate the guitar. And that worked,” Rawail says.

In addition to Khumariyaan, a band called Ismail & Junaid (which has since ceased to exist) emerged from these jam sessions. Bogra joined Ismail Khan and Junaid Javed to play the rubab on the band’s first and most famous track, Qarar, in 2010. The song became extremely popular in Pakistan, even though most people could not understand the Pashto lyrics.

“It was kind of like a breakthrough for the whole culture,” Khan, the then-lead singer of the band, says over the phone from Peshawar.

Although Khan has since abandoned this particular genre and has gone solo, he still believes in the importance of what this young group of university students has achieved.

“The Pashtun music scene was dead. There was no one who was pushing the music in a different or a new way. It wasn’t connected to the youth,” he says.

The only contemporary Pashto music available was hastily produced and overladen with synthesisers and cheesy lyrics that did not appeal to the younger generation. One female singer, for example, infamously sang about being as hot as a suicide bomber.

“Even I didn’t listen to Pashto music before,” Khan says. “Everyone was like that. They wouldn’t find Pashto music cool. It was something to be ashamed of back then.”

But Ismail & Junaid and Khumariyaan changed this.

“[The bands’] music touches on all these classical, instrumental traditions but then they also take it out of that,” Asfandyar Khan, a music critic and commentator says. “That’s obviously appealing because it feels like, okay, this is something that I love but it’s still tied into my culture.”

The emergence of social media gave smaller bands a much-needed platform and now they no longer needed to get signed by labels that had no interest in promoting Pashto music. They could simply release their songs on YouTube or SoundCloud, which is what helped Khumariyaan and Ismail & Junaid develop a following.

But another reason that hindered the development of the contemporary Pashto music scene was the prevailing security situation.

Peshawar and the adjoining areas in particular suffered from relentless terrorist attacks by the Pakistani Taliban, or the TTP, in the years between 2006 and 2014.

“People would wake up to bomb blasts. At 5am the first one, 7am the second one and 9am the third one. And before maghrib, sunset, there would be like five blasts,” Rawail remembers and shakes his head. “It’s not easy to play music when there’s been a blast two days ago.”

During these earlier years, the bands sometimes faced threats from fundamentalists and the Taliban who had banned music in areas under their control. The group also threatened and attacked musicians in other areas of the province of Khyber Pakhtunkhwa, including Peshawar.

“They would call me up many times, they would threaten to kill me and say that I should sing nasheeds [Islamic chants] for them,” Ismail Khan recalls.

But to his surprise, some of the extremists also appreciated Ismail & Junaid’s music. “They said, ‘you are bringing out the positive image of Pashtuns’.”

In a bizarre, macabre twist, the Taliban even made their own cover version of Qarar and changed the lyrics (which are actually about love) to praise suicide bombers.

“We did get a few phone calls but nothing too drastic,” Rawail says.

The fact that the band members were playing contemporary music and were from an educated background protected them, Rawail thinks.

“No one really cares about poor folk musicians so the Taliban or anyone with a fundamentalist mindset can force them out or make them stop.”

The security situation has vastly improved in Peshawar and elsewhere in the country since army operations started in 2014. But especially in conservative Pashtun culture, many people still believe that musicians are not decent people, even though their music is appreciated. Some Islamic scholars also believe music to be haraam, or prohibited in Islam.

“We have doctors, engineers and lawyers who used to hide their rubabs now coming to us and saying, ‘where can we buy a rubab? Where can we get it fixed?’” Rawail says.

The Pashtun fan base is not only made up of the young Peshawar elite but also of the more traditionally minded people, Rawail says. “They like the fact that there is someone who can take their music abroad and present it.”

Although Khumariyaan had already gotten to perform in Europe and the US, it was only in October 2018 that the band shot to nationwide fame.

The entire country became entranced when they appeared on Pakistan’s hugely popular Coke Studio show which features live performances by artists from all over the country and combines traditional and modern influences.

“We were probably the first Pashtun band featured. There were vocalists in a couple of seasons. It just felt like they had a token Pashtun in there just to not piss off people,” Rawail says and sneers.

“I’m glad the producers had the vision and the courage […] to have us do what we wanted. It takes a lot of guts.”

Now their Coke Studio song Ya Qurbaan, which unlike their other purely instrumental tracks includes a few lines sung in Pashto, is played on repeat all over Pakistan, in clothing stores, cafes and private gatherings. And everyone sings along, whether or not they understand the lyrics.

This is a major change in the way Pashto music is viewed by the rest of the country.

“It has actually taken over the other music scenes over here, even though there’s so much discrimination towards us from the other races of this country,” Khan says.

According to Asfandyar Khan, Pashtuns are commonly stereotyped as being terrorists and extremely backward and misogynistic when compared with the rest of the country.

For Fakhr Aman, a 28-year-old Khumariyaan fan from a Pashtun background, it is inspiring to see his non-Pashtun friends enjoying Pashto music: “We can share the same music now. Before it wasn’t possible. I would play Pashto songs and my friends would play Urdu or English songs,” he says.

“It’s showing a new perspective of Pashtuns. Now it’s on big channels and [there are] international concerts as well.”

According to Asfandyar Khan, this is a very important development for the Pashtun youth.

“I think nothing inspires somebody more than seeing one of their own succeed,” he says.

“It sort of legitimises that passion more than anything else. It’s harder to believe music is haraam, music is something we should not do, because one of your boys just went and did it.” Maija Liuhto is an independent journalist based in Islamabad, Pakistan. Her work has appeared in publications such as the Atlantic, Al Jazeera English and Foreign Policy. 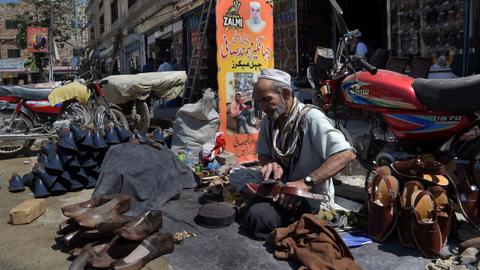 Afghans call for ceasefire as huge peace summit wraps up

1
How Aafia Siddiqui’s case symbolises 'the lies' of War on Terror
2
How Bangladesh police are hounding families of ‘enforced disappearances’
3
6 ways to recycle your old Christmas tree
4
How the internet's leading account on Palestine maintains its message
5
Beset by financial woes, Afghan embassies struggle in limbo