MAIDUGURI, Nigeria — Can anything good come out of the Boko Haram insurgency?

“After every war, there are a lot of good things that come out of it. The war brought out the best in the economy. It was an eye-opener to the true economic potentials of Borno state.”

In the last decade, the  Boko Haram insurgency has claimed at least 20,000 lives and displaced an estimated two million people. Many businesses have shut down across north-eastern Nigeria ever since, driving traders into panic and forcing many to relocate to other states.

Before 2013, the Boko Haram insurgency targeted the suburbs of Maiduguri, subduing the locals and establishing their rules in those places. This trend was altered in 2014 when the military flushed the insurgents out of territories they had occupied for months.

The group moved down to far flung villages, destroying houses, churches and markets. The presence of Boko Haram in many towns and villages triggered a mass exodus of people who fled to save their lives and escape violence and persecutions committed by the armed group.

In 2016, the Internal Displaced Monitoring Centre estimated that two million Nigerians have fled their homes and ended up in urban areas around the main crisis zones. Only about 10 percent of this number are sheltered in official humanitarian spaces in Nigeria’s 13 states, with most of them in Maiduguri – the epicentre of the insurgency.

“People fleeing the troubled suburbs to the central city came with a lot of money in bags looking for places to buy in the safe areas. The prices of properties in these safe places were shooting up every day and many developers saw a great opportunity in this,” says Almad.

On a cold winter evening in early August, Lagos-based journalist Festus Iyorah arrived in Maiduguri on a reporting trip. For more than two hours, he moved from hotel to hotel finding a place to sleep.

“They told me all hotels were booked. They said I should have booked (a hotel room) months in advance. And there is a lot of competition among hotel owners, and the prices of hotels are going up every day,” he says, with a pensive look on his face.

Iyorah had it easy in the past, but not now. The insurgency has brought in hotel users in large numbers – the expatriates, the NGOs, the humanitarian agencies, the government agencies – all squeezed into a tiny city, competing for space.

“In Maiduguri, there is a starving crowd,” says Iyorah. There is a huge population chasing a few available properties in the safe, central city. This created a huge market for property owners in Maiduguri who are now struggling to feed the crowd, he said.

Audu Bako, the director of the government’s urban planning and development board, says Maiduguri was initially designed to take in two million people, but roughly accommodates nearly “five million persons today.” This has stretched amenities within the central city.

“Housing accommodation is overstretched. A house originally designed for two-three families now takes in about ten. It is hard to find an idle land within the inner city,” he says.

In 2015, the Borno state government created the Ministry of Reconstruction, Rehabilitation and Resettlement to restore some destroyed communities, resettle displaced people and reduce pressure on properties in Maiduguri.

But researchers say the Nigerian government does not appear to see population displacement as a serious national security challenge. The government, they argue, is more interested in fighting terror through military hardware than addressing the displacement crises. Also, the lack of documentation of the internal displacements means interventions cannot be appropriately channelled.

In 2010, Almad's business expanded, and he formally started Dolphin Global Enterprises Limited – a property development firm that mostly deals with war-affected buildings. In part, Almad scanned places of new attacks and bought properties from owners who were selling off in panic.

"After each attack, you find people from that location desperately looking for people to buy their hotels," he says. "I bought those properties because I know that war is a temporary thing."

Bordered by Cameroon, Niger and Chad, Maiduguri is strategically placed to thrive economically. It has remained an entry point for many traders from these nations, acting as a strategic commercial hub.

Though a lot of people have been fleeing Maiduguri, many displaced families have also settled in the relatively safer city. The population shift spiked real estate prices and helped dealers like Almad make major financial gains.

“Some days, we have up to 50 clients seeking for places to stay. Our service teams were overstretched and meeting the needs of new entrants was becoming more difficult. The prices of properties within the cities significantly increased,” he says.

Lately, the prices of those properties have grown massively after a relative return of peace in some parts of the city. People are beginning to return to some of the towns in Maiduguri's suburbs.

Almad employs more than a hundred youths indirectly, with around 20 staff members working in his expanded office in Maiduguri. He says that in 2017, his turnover was close to a million dollars. Before the war, it was a lot less than 30,000 dollars.

“Without this war, many of us won’t see the opportunities for the growth of the economy. There is a huge market for interested investors in Maiduguri. There are days I receive up to 20 demands for houses.”

Maiduguri – a dusty landscape of relative peace – is changing fast. In the last few years, dozens of buildings have popped up, and several new buildings are under construction. Investors and property developers have returned to the city. High-end supermarkets, schools, churches, town halls, residential buildings and government-funded camping settlements have significantly increased across the city.

“I still think that there are many businesses in Maiduguri that have the potential to create as much income as the real estate businesses. But people are not seeing it,” Ahmad says.

Yakubu Ibrahim, 35, was a student at the University of Maiduguri in 2009. The insurgents, deeply opposed to Western education, battled to bring down the institution. One evening, the insurgents launched an attack at a corner of the university that left about seven students dead. Ibrahim fled from school.

“There were many people who were in our community. They needed houses to sleep. But it was not our thing to make money out of houses,” he says, referring to the encounter he had when he returned home.

The native culture of hospitality in Borno villages meant properties, like houses, were mostly offered to visitors as an extension of courtesy. Hotels were the only approved means of making money in the hospitality industry.

“There were many properties and houses that never yielded any dime to the owners. But when the insurgency started, those useless houses started yielding money,” says Ibrahim.

Ibrahim started reaching out to native house owners. He demanded that they lease the houses to him in return for some money. Within a couple of months, Ibrahim’s wealth and experience had grown. He slotted quietly into the property development sector and has gone ahead to develop properties, including ongoing construction of a new hotel in Maiduguri, Nigeria.

“No fewer than 10,000 houses were destroyed, in addition to over 86 public buildings, comprising schools and hospitals, among others,” Babagana Umara Zulum, the state commissioner of the three-year-old Ministry of Reconstruction, Rehabilitation and Resettlement, told the News Agency of Nigeria.

The government of Borno state says the task of rebuilding the state and the properties destroyed by the insurgents is enormous. Many public utility buildings – post offices, police stations, council halls and more – across the state were damaged or completely razed by Boko Haram in the wake of their killing spree. Some of these buildings are already under construction.

“We are surprised at how quick Maiduguri is being rebuilt,” says the state’s urban planning and development board. “We would continue opening up more opportunities for private investors to come in and rebuild the city.”

Orji Sunday is a freelance journalist based in Lagos, Nigeria. He contributes to The Guardian, Al Jazeera, MS. Magazine and African Arguments, amongst others, and covers politics, health, development, environment and conflicts in sub-Saharan Africa. 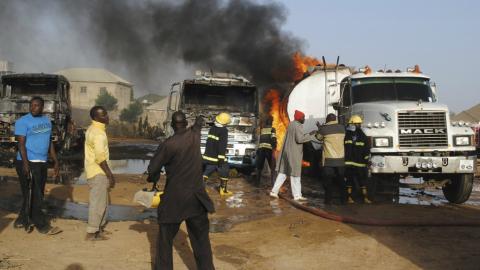 At least 12 killed in suicide attacks in Nigeria