1
An Afghan-Dutch chef’s efforts to preserve an old way of life
2
One year on, the Taliban struggles to provide services they used to disrupt
3
A year after Taliban takeover, Afghans wait for a better future
4
Are Western banks blocking debt relief for poor countries?
5
Tetris: An unexpected tool against intrusive trauma memories

Last month, Omar Mohammed watched with pride and satisfaction the fruition of one of his biggest dreams—the launch of a project that aims to plant 5,000 trees in Mosul, Iraq’s second-largest city devastated by the three-year reign of the so-called Islamic State or Daesh.

For the journalist, historian and blogger, however, the Green Mosul project is just one step towards reviving the city to its former glory. A city which was reduced to rubble by Daesh, its famed library containing nearly a million books burned down in what UNESCO described as “one of the most devastating acts of destruction of library collections in human history”, and most of its historical landmarks destroyed beyond repair.

“It was important for us to show that the initiative can bring people together to celebrate something fruitful, while also making an immediate impact on the people of Mosul,” Omar told TRT World.

“Trees have no religion and no identity. That is why everyone has accepted the planting of trees in places like churches, mosques, Yazidi shrines, universities, schools, museums, and public spaces.”

The green project, backed by the French government’s The Crisis and Support Centre, will see the plantation drive run through February 2022.

In what Omar describes as a “beautiful yet painful” aspect of the project, the initiative has encouraged those who have lost loved ones during the conflict to dedicate certain trees to family members, colleagues, and friends. He said a large number of volunteers are engaged in the plantation drive.

Once known as the green capital of Iraq, years of conflict and a recent crippling drought throughout the province have almost wiped out the city’s green cover. Omar said that the trees selected for the plantation drive include lemon, pistachio, grape, orange, pine, and cypress. He said the tree species were selected based on a scientific study carried out by agrarian specialists.

Over its nearly 1,000-year-long history, Mosul had become a melting pot of cultures and traditions as it emerged as a flourishing trading hub inhabited by people of different faiths and ethnicities. Omar said that earlier Mosul used to trade its pistachio trees with neighbouring countries such as Turkey and Syria.

Adding your names to the trees

The range of trees being planted is distinguished by the thickness of their leaves and their resistance to severe environmental conditions as well as their ability to provide considerable land coverage, said Omar, the founder of the Mosul Eye Association which is leading the project. Mindful of water scarcity affecting the region, the association made it mandatory to obtain water needed for tree growth from irrigation systems that use recycled water.

Backing the initiative, Mosul governor Mosul Najim al-Jabouri has also made it mandatory for anyone seeking to build a house or other structures, to provide proof that they’ve planted at least one tree within the complex.

For Omar, all these began in 2014 when he launched his Twitter handle Mosul Eye to tell the world about the devastation being wrought on his city by Daesh. Forced into hiding for fear of retaliation by the outfit—he still lives away from the spotlight—Omar watched in horror as Daesh fighters systematically went about destroying anything they considered “un-Islamic”, including the library at the University of Mosul. Once one of the largest libraries in the Middle East, the terrorist organisation considered the library’s treasures as “useless science,” “illegitimate science” and “blasphemous books”. After Daesh fell in 2017 following a devastating nine-month siege of the city in 2016-17, Omar’s association set about their mission of reviving Mosul—culturally, musically, and artistically.

Omar now has the support of approximately 350 volunteers.

"We really like the idea of this project, especially the concept of adding your names to the trees. This has encouraged us to plant trees," Muhannad Hajiyyat, a volunteer who has become the team leader of the Green Mosul Initiative, told TRT World.

Hajiyyat said that locals have been demanding that the initiative should be extended to other areas such as Alqosh, Qayyarah, and Rabia.
“Because people are so used to broken promises, they initially did not have faith in this project. However, attitudes shifted when they started to see coverage of the project launch, opening ceremony, and planning stages. People were simply left in shock by such efficiency," Omar said.

As a result, the initiative has seen generous gestures, such as the donation of 500 trees by individuals.

Omar’s project complements the Iraqi government’s Mesopotamian Revitalisation Project that aims to revive lost forests in southern and western Iraq. Called the ‘Garden of Eden Reforestation Program’, the preliminary goal is to plant 20-30 million palm trees within two years. In the long term, the plan is to plant roughly one billion trees across Iraq by 2030, as well as regularly replenish saplings to replace temporary losses.

The initiative is expected to help Iraq address climate change challenges, which in recent months, has become a priority for the country. According to the UN Environment Programme, Iraq is currently the 5th most vulnerable country globally facing reduced water supply, food accessibility, and severe temperatures. Zainab Mehdi is a Researcher and Freelance Journalist specializing in governance, development, and conflict in the Middle East and North Africa region. 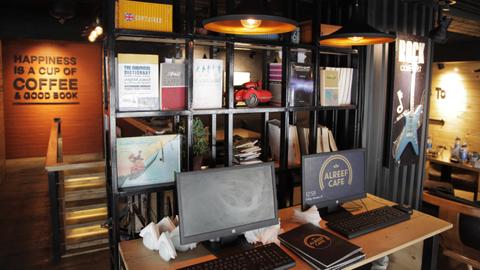 1
An Afghan-Dutch chef’s efforts to preserve an old way of life
2
One year on, the Taliban struggles to provide services they used to disrupt
3
A year after Taliban takeover, Afghans wait for a better future
4
Are Western banks blocking debt relief for poor countries?
5
Tetris: An unexpected tool against intrusive trauma memories