This is what brought Sinn Fein to victory in the Irish polls.

The Irish poll results upended a century-long political structure in the Republic of Ireland, as Sinn Fein, an outsider which has been historically associated with the Irish Republican Army, (IRA) came out on top in the general election.

For almost a century, the two centre-right parties, Fine Gael and Fianna Fail, have governed Ireland, but that run has ended after Sunday’s polls.

According to unofficial results, the current government’s Fine Gael party only managed 20.9 percent of the vote and its partner Fianna Fail, 22 percent, as the centre-left Sinn Fein raised its portion of the votes to nearly 25 percent, putting itself in a pivotal position to cobble together the next Irish government.

Prior to the polls, both centre-right parties ruled out a coalition government with Sinn Fein, citing its association with the IRA’s violent past.

“The growth in support for Sinn Fein is rooted in their economic and social policies,” Theresa Reidy, a political scientist at University College Cork in Ireland, argued.

The new voters for Sinn Fein seem to come from a younger generation which has not witnessed first-hand the deadly sectarian violence, the age of The Troubles, raging in Northern Ireland from the late 1960s to the 1998 Good Friday agreement, which ended the armed conflict between the United Kingdom and the IRA.

Young voters have become increasingly estranged from the country’s establishment as Ireland goes through the worst economic recession in its history, damaging mainstream political parties and propping up Sinn Fein as a feasible alternative.

While traditionally Sinn Fein has been more concerned about reunifying Ireland with Irish-majority Northern Ireland, which is part of the UK, opinion polls showed that people are more interested in housing and health care than they are in reunification.  “Homelessness and crime are a big thing, and the two big parties are not helping with that,” said Michael Doyle, 52, a former voter for Fine Gael.

Under new leadership, which passed from Gerry Adams, a man who was accused of being a former member of the IRA, to Mary Lou McDonald, a 50-year-old, middle-class politician, who is a native to Ireland unlike Adams who was born in Belfast, Sinn Fein seems to have changed its traditional outlook.

“This election has proven to be seismic. It is historic,” McDonald said. “The two-party system in this state is now broken. People want a different politics and a different government,” she added.

But there are also other political factors such as Brexit and the British nationalism that came with it, that has in turn triggered Irish nationalism.

While a majority of Northern Ireland voted to Remain in the 2016 Brexit referendum, the rest of the UK voted to leave, marking a stark distinction between London and its Irish periphery.

Sinn Fein has used Brexit as a justification of its argument for unification.

In 2017, Adams, the former leader of Sinn Fein, warned: "Taking the North out of the EU will destroy the Good Friday Agreement."

"The British government's intention to take the North out of the EU, despite the wish of the people there to remain, is a hostile action. Not just because of the implications of a hard border on this island, but also because of its negative impact on the Good Friday Agreement,” Adams added.

The conflict in Northern Ireland began in the late 1960s stemming from the region’s sectarian divisions. While Catholic-majority Ireland won its independence in 1922 after a bloody war with Great Britain, its Protestant-majority in the north refused to secede from London, resulting in a political and military conflict between the two Irish communities.

The sectarian clashes killed more than 3,500 people on both sides. With the Good Friday deal, the violence significantly decreased.

But Brexit has raised concern on both sides.

With Brexit going ahead, there could be two possible political scenarios for Northern Ireland. Both appear to be problematic for the country’s Irish communities, who overwhelmingly want to stay in the EU.

The first scenario creates a hard border between the two Irelands.

If pro-Brexit Prime Minister Boris Johnson goes for building a physical border between the two Irish political entities after the country’s divorce from the EU, it has the potential to anger Catholic-dominated Irish Republicans, who want to merge with independent Ireland, viewing the move as a part of a policy to divide Irish communities.

The second scenario creates a customs union between the two Irelands, operating under both EU and the UK law.

If Johnson wants to implement a difficult plan, ‘the Irish backstop’, envisioning a Northern Ireland which could stay within the UK customs union, but can still operate under EU regulations, it might take the British region closer to Dublin than London, angering pro-British Protestant Unionists. 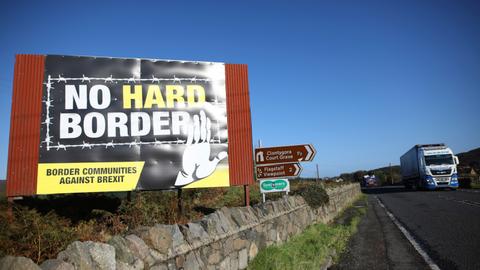 Are increasing tensions in Northern Ireland linked to Brexit?