Forty-six were found dead in a truck at the US-Mexico border in the largest such incident in decades, as Trump-era migration policies remain in place despite Biden’s pledges.

Forty-six people were found dead in a truck at the US-Mexico border on Monday, the largest such incident in decades.

The victims are believed to be migrants trying to cross illegally into the United States from Mexico, amid a surge in

According to Mexico’s foreign ministry, two of the people taken to hospital were from Guatemala. Three people were taken into custody, according to local police chief William McManus, who did not specify what charges were pressed against them.

The truck was found by the employee of a nearby business, who heard a cry for help and found the doors of the trailer partially open, the local police chief told reporters.

US secretary of homeland security Alejandro Mayorkas said an investigation was launched by the US Immigration and Customs Enforcement (ICE), supported by the local police and border force.

Rising deaths on the US-Mexico border

According to the International Organisation for Migration (IOM), a UN agency, nearly 4,000 people have been recorded dead or missing at the US-Mexico border since 2014. 2021 saw more deaths on this border than at any time since the government began reporting US-Mexico border deaths in 1998. The IOM says the death count is an underestimate.

Most people crossing into the United States from Mexico are from other countries in Latin America including Honduras, El Salvador and Guatemala, fleeing threats from gangs, or a lack of work opportunities.

The city of San Antonio has been the scene of similar tragedies in the past. In 2017, ten people died inside a truck parked at a Walmart in the city, while in 2013, 19 bodies were found in a truck on the same smuggling route, a major transit point for migrants and refugees making their way from Texas to elsewhere in the United States. The closest border crossing is around 220 kilometres away.

Texas has recorded record temperatures in June amid a prolongued heat wave.

US border policies unchanged since the Trump era

The Republican governor of the State of Texas, Greg Abbot, was quick to blame the deaths on President Joe Biden’s “deadly open-border policies” and “his refusal to enforce the law”.

In fact, the Biden administration has largely upheld restrictive migration policies that were introduced during the Trump era.

The Trump administration first introduced a controversial policy known as Title 42 in March 2020, which proponents claimed was aimed at limiting the spread of Covid-19 and allowing border guards to expel the incoming migrants and refugees quickly.

Although the Biden administration had sought to end the policy on May 23, a federal judge ordered in March that the policy remain in place, amid concerns it could lead to a surge in migration in the summer months. Critics argue it has encouraged attempts to cross the border illegally.

The policy was suspended for unaccompanied minors in March, but it still applies to people travelling in families.

“With the border shut as tightly as it is today for migrants from Mexico, Guatemala, Honduras, and El Salvador, people have been pushed into more and more dangerous routes,” Aaron Reichlin-Melnick, policy director at the American Immigration Council, wrote on Twitter.

Another controversial policy requires migrants from third countries arriving through the southern border with Mexico to wait for the outcome of their asylum application in the latter.

The policy, commonly known as “Remain in Mexico”, is currently before the US Supreme Court after states sued the Biden administration to stop it from ending the programme. 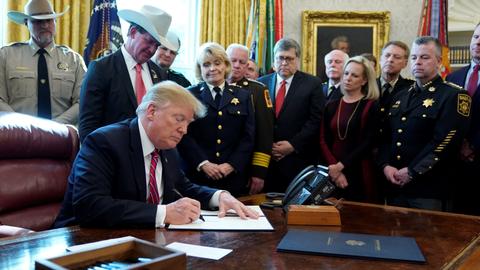