Football players across the world have expressed their solidarity with Palestinians after Israeli forces attacked the Al-Aqsa Mosque and bombed civilian neighbourhoods of Gaza.

At least 43 Palestinians have been killed, including 13 children and three women, and 300 others have been wounded in Israeli airstrikes.

Amid a reckless bombing campaign launched by Israel against Palestinian civilians, considered to be more grave than the one that took place in 2014, people from all over the world have been criticising Israel for having gone rogue.

The players of one of Turkey's leading football teams, Fenerbahce, took to social media to express their support for the Palestinian cause.

From Mesut Ozil to Luis Gustavo, the Fenerbahce players wore FreePalestine t-shirts before the league match against Sivasspor on Tuesday.

I’m calling on all the world leaders including on the Prime Minister of the country that has been my home for the past 4 years to do everything in their power to make sure the violence and killing of innocent people stops immediately. Enough is enough. @BorisJohnson

Salah changed his profile picture on Twitter, instead posting a picture of him taken in the compound of the Al-Aqsa Mosque. The picture went viral with tens of thousands of Twitter users retweeting it.

Inter Milan’s Achraf Hakimi shared a striking photo of a Palestinian girl exchanging words with Israeli police after she was arrested.

Manchester United's Paul Pogba also showed his support for the Palestinian people in a post on social media.

"The world needs peace and love. It will soon be said. Let us all love one another. #PRAYFORPALESTINE," Pogba said on Instagram.

"O humanity! Indeed, Allah’s promise is true. So do not let the life of this world deceive you, nor let the Chief Deceiver deceive you about Allah," Surah Fatir verse 5.

The players of Chile's Primera Division de Chile (Chilean Premier League) expressed their solidarity by wearing the Palestinian keffiyeh before their fixture against Colo-Colo in Santiago on Saturday.

Tensions have been running high in the Sheikh Jarrah neighbourhood of East Jerusalem since last week when Israeli settlers swarmed in after an Israeli court ordered the eviction of Palestinian families.

Palestinians protesting on behalf of the residents of Sheikh Jarrah have been targeted by Israeli forces.

Israel occupied East Jerusalem during the 1967 Arab-Israeli war and annexed the entire city in 1980 – a move that hasn't been recognised by the international community. 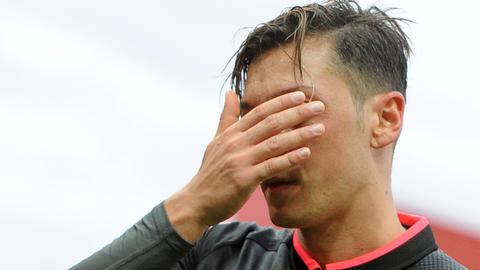