Two Austrian-Turks saved the life of a police officer and two elderly women in Vienna's terrorist attack that killed at least four people and injured 15 others.

Recep Tayyip Gultekin and Mikail Ozen were in Vienna’s city centre when the attack began. Both headed in the direction of the incident and saw the attackers shooting at civilians.

Gultekin came to the aid of an injured woman.

"After I carried the woman to a nearby restaurant, the terrorist pointed his gun at me," he said.

Then Gultekin hid from the gunman who was carrying a long-barrel assault gun.

However, he could not avoid being wounded.

“A pellet from this gun hit the back of my right leg. However, it did not cause any major injury.”

Here is what one of the two Turkish men who helped the police during the Vienna terror attack said about the encounter pic.twitter.com/5PBL4ZDDMK

Gultekin and Ozen went to the nearest police station to report the incident.

Gultekin stated that they immediately went to the police station to gave information, then helped an old woman who was in shock from the attack near the scene.

They were also confronted with another attack on a police officer, noting that the medical teams did not approach the scene due to the attack.

“Other police officers were looking at him (wounded police), they did nothing while I shouted at them for help.”

"I told Mikail we will do this. We reached the police… We carried the police to the ambulance me, by holding his back, and my friend by his feet.”

Gultekin said that they carried the injured officer to the ambulance with Ozen.

The officer had been injured between the abdominal cavity and calf and lost a lot of blood, Gultekin said.

The paramedics wanted to take Gultekin to the hospital but he refused because there were many people suffering injuries, he added.

Later, after making his way to the hospital, doctors told Gultekin the bullet pellet might have to stay in his leg as removing it might cause problems.

Saying that he lives in Austria and makes his living here, Gultekin said: “The police who were injured were my police. The people injured were my people. I give my condolences to the Austrian state and hope the injured people make a quick recovery.”

He added: “If the same thing happens tomorrow, I wouldn’t hesitate to save people. I don’t want to see discrimination between Muslims, Jews, or Christians. Terror has no place in these religions. Terror is terror everywhere.”

At least four people died and 17 more were wounded in the terror attack in Austria’s capital on Monday evening, authorities have confirmed.

The injured include a police officer, according to the Vienna Police Department. 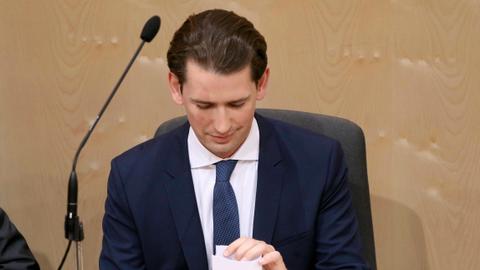