Algeria's war of independence continues to define how the state has evolved, yet promises made but not kept are what concerns the younger generation.

She takes a deep breath, her eyes reflecting the pain of the memories that come rushing back when asked about the war.

“We never had any good moments as children playing,” my grandmother, Cherifa Bouaita, begins. “Our attention was always concentrated on when the French troops were coming next with their big heavy war machines and warplanes to bombard the village around us.”

The war of liberation was sparked by the massacre of thousands in Setif, Guelma, and the surrounding areas in 1945 at the hands of French colonialists.

The National Liberation Front (FLN) was the principal national movement that spearheaded the independence struggle by first circulating nationalistic pamphlets amongst the population, whom they wanted to disassociate from the French, and then through guerrilla warfare via its armed wing, the National Liberation Army (ALN), and other units.

“In our revolution is the end of empty talk” - Algerian national anthem, verse 19

Cherifa was 15 when the war first broke out. By the time it had engulfed her village of Ain Aghbel in Collo, east of Algeria, she, like thousands of others, became an active participant in the war.

Her mother, Ameena Elamri, would nurse and feed fighters in the village centre and would often pass messages from one group of fighters to another.

My great grandfather, Bachir Bouaita, a shepherd, would use his livestock to help provide food and used the family home as a shelter for passing fighters, or Mujahidin, as they are known.

With their village attacked by French forces following a tip-off from informants, they were forced to leave everything behind to avoid being killed.

“We were young babies and children who were malnourished with little clothing on and we had to escape into the mountains where it was dark and full of danger as we waited for the French to leave,” my grandmother recounts.

In the middle of the night, while it was pouring with rain a woman was holding a crying baby only a few months old as they made the perilous journey.

“One of the elders of the group told the mother that if the baby did not stop crying she would bury the baby alive or we would all die if the French heard us," she says.

Elamri and other women would smuggle weapons for the resistance by hiding them in baskets filled with animal feed.

“I remember the fighters would usually come to our houses at night: around 30 to 50 fighters at a time. They were so kind to the kids and they would entertain us with some traditional songs,” my grandmother says with a smile, recollecting the few fond memories from that time.

On one occasion, her mother was shot in the leg by the French during an attack. Fearing that the French would discover the messages she was carrying, Elamri was forced to swallow them to protect the identities of the fighters.

The war raged on for eight long and brutal years, claiming the lives of more than 1.5 million Algerians. It was defined by depraved levels of torture, executions and poverty.

It was only in September of this year that Emmanuel Macron, the first French president born after independence, finally acknowledged France's responsibility in the torture of Algerian detainees by notorious generals such as General Paul Aussaresses.

Despite this acknowledgement, Macron, like his predecessors, has fallen short of providing an official apology for the state’s culpability in Algeria.

Dr Kelsey Suggitt, from the University of Portsmouth, explained to me how the French state “sought to move away from any terminology that would imply that the conflict was anything more than domestic civil unrest.”

“On our shoulders, we shall raise the standard” - Algerian national anthem, verse 25

“The worst hardship we suffered was when the French army forced the community into an internment camp which we lived in for six long years,” the pain from that dark period is still evident on my grandmother’s face.

They were searched every time they left or entered the camp.

“Despite all this, my mother was really brave and she never stopped helping the Mujahidin,” she explains.

Ameena was awarded Mujahid status by the Ministry of Mujahideen in Algeria, which entitled her to a special pension for life for her participation in the war. Elamri, however, died before she could claim her pension.

Like thousands of other Algerian women at the time, Elmari had to juggle the role of being a wife, a mother, a sister, a friend, all while passing messages to the resistance and assisting the revolutionary effort.

Success without their contribution would certainly not have been possible. Women in the Algerian capital of Algiers would supply weapons by hiding them under their haiks (traditional coverings) or, while dressed in western clothing, would plant bombs hidden in baskets in cafes and restaurants frequented by the French occupational authorities.

Some of the legendary figures from the war were women: Djamila Bouhired, Zohra Drif and Hassiba Ben Bouali are just as recognisable as male heroes such as Larbi Ben M’hidi and Ali Le Point.

Testimonies of women detailing rape and torture, such as Louisette Ighilarhiz’s in 2000, were able to trigger “a nationwide debate on the practice as a crime against humanity” in France, according to Dr Suggitt.

A key event that defined the war was the massacre in Paris on October 17, 1961, which saw hundreds of protesting Algerians killed and their bodies dumped in the river Seine.

A witness from that night, Hajj Mabrouk, whose story I became aware of through his family friend Anes Chergui, recounted the violence on Neuilly bridge by the police armed with machine guns and batons.

One of Mabrouk’s more poignant stories from that night was when “thousands of Algerians were rounded up [and detained] in the newly constructed Palais de Sports arena where Harkis [Algerians who fought with the French] participated.”

An Algerian complaining about a headache from a head injury was met by a Harki who responded by shooting him point blank thus “ending the headache”.

There are millions of households in Algeria that carry difficult stories of poverty and violence that are slowly being lost to the abyss of regressing minds or dying generations.

“In the 60s and 70s you had this huge public memory which was the war of liberation,” Professor Martin Evans, at the University of Sussex, explains.

But by the 80s and 90s, following the clashes of Black October in 1988, “scepticism” and “cynicism” towards that national memory reflected the sentiments of the troubled post-independence youth towards their leaders.

The country is decorated with statues, schools and streets that serve as permanent reminders of the bravery of national heroes who gave their lives for freedom.

Like thousands, a street in my family’s city of Skikda is named in honour of the heroism of two of my great uncles who died: Rue des Frères Allouche, or the Allouche Brothers street.

One renowned hero from the war was Colonel Amirouche Ait Hamouda, a military leader of the historic Wilaya III, who fell in 1959 during the ambush of Djebel Thameur.

One of his close comrades was Tayeb Mouri, whose story I learnt from his brother Abdelkader Mouri.

Tayeb became engaged in politics at the age of 14 and first became acquainted with Amirouche in Paris, before returning to the Kabyle region of Algeria where he joined the resistance at the age of 20.

He died fighting alongside Amirouche three years later in the ambush, securing his place as one of 14 martyrs from the Mouri family.

A “tireless” hero to his brother, Abdelkader always “displayed calm behaviour” alongside Amirouche. Some of the pictures of the pair have been found in the archives of the Vincennes museum in France.

“And we have resolved that Algeria shall live” – Algerian national anthem, verse 1

My grandmother was 23 when independence was finally announced on July 5, 1962.

“I never felt as happy in my life as that day and the relief from the constant fear of the enemy striking us at any time,” she recalls.

“People all over the country were stacked near the radio waiting for the announcement of the official word of independence. Once they heard it, everyone began celebrating in the streets,” she recalls.

She married my grandfather, Ahmed Allouche, whose own stories include attempts at desertion from the compulsory service in the French army to join the Algerian resistance, and went on to raise eight children, who came to represent the new post-independence generation.

During the independence struggle, short-term priorities overrode some of the ideological differences and contentious issues that would later surface. Issues such as what it means to be Algerian, the direction of state socialism and the role of religion and language in the new state.

I asked Dr Jim House, Senior Lecturer in French and Francophone History at the University of Leeds, what the FLN would have needed to do following independence.

“After a devastating war for independence that had seen multiple civil conflicts, large-scale forced population movements and a severely-impacted economy, alongside longer-term problems such as illiteracy, setting up and staffing a new state... would and did take considerable time.”

Those born after independence have had their day-to-day experiences of life dictated by the Algerian government and the Algerian system.

“Today, there is a great misunderstanding between young people and the generation that liberated the country,” Amar Mohand-Amer, an Algerian historian and researcher at The National Research Council (CRASC) told me.

“Algeria lives still according to the patterns, and reflexes of the past and the war of liberation is always a source of political legitimacy.”

The current generation is driven by the emancipatory promises made by the postcolonial nationalists and the expectation of social reforms and justice driven by post-independence populist politics.

The collective pride in Algeria's national heroes has defined Algerian identity since independence. But the post-independence promises for a younger generation that has not known war remain unfulfilled. Ultimately that is Algeria's unfinished revolution. 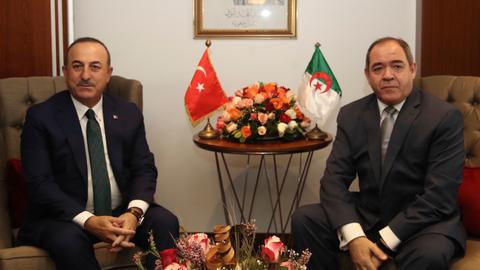