Who is responsible for the death of a three-year-old Palestinian?

1
A Kyrgyz videogame begins to show up the violence of “bride kidnappings”
2
Alacati post lockdown: local tourists start making their way back
3
Everything you need to know about the mutated, possibly airborne Covid-19
4
Saudi Crown Prince prepares new charges against Mohammed bin Nayef
5
Delivered in style: “Mango in a Lambo”

The Lebanese government and the UNRWA say the boy's time was up, while his family accuses both the authorities of ignoring the ailing child because of his identity.

BEIRUT — Until a few days ago, Mohammed Wahbah's mother was busy doting on her son. Now, she is in disbelief.

“I can not imagine my son is not there anymore,” she said. “The most beautiful child in the world has been taken away from me.”

Three-year-old Wahbah lived in the Nahr al Bared Palestinian refugee camp in North Lebanon with his parents and a sister. Even though his father earned a modest living, the family yielded to all of Wahbah’s demands.

But they did not have the means to procure a bed for him in the intensive care unit in any of the hospitals across Lebanon, and could not save his life.

He died last week as he waited for treatment.

His death has gripped Lebanon, raising the question, why after all did a child not get a bed in any of the hospitals? It has also raised a suspicion among the Palestinian activists - who already feel the community is isolated and left behind - that Wahbah was not prioritised because of his Palestinian identity.

Wahbah suffered from Hydrocephalus; a chronic, neurological condition in which spinal fluid accumulates causing pressure on the brain. He was in urgent need of treatment when on December 14 he was admitted to the Islamic Hospital in Tripoli. The family hoped he would be moved to the ICU but the hospital said it did not have any beds. Desperate for help, the family reached out to at least three other hospitals, not one could admit their son.

His mother does not believe that her child was refused because of a lack of beds. She said that Hammoud hospital - where the boy had been treated in the past - did not admit Wahbah because the family fell short on the previous payment. She claimed Karantina and Hariri hospitals did not accept him because they said that they do not treat patients of other hospitals.

Three days later, he was moved to Tripoli Public Hospital with the assurance that they had a bed in the ICU and could give the child specialised pediatrics care. By then Wahbah’s condition had deteriorated and perhaps it was too late to revive the child. But the family and their friends said that Wahbah lost crucial time even as the final hospital caused unnecessary delays. The boy died lying in the emergency ward of Tripoli Public hospital, before he was taken to the ICU.

His mother said, “My son is sleeping in peace now away from the heartless in this country.”

As the news of Wahbah’s death reached Nahr al Bared camp, the local activists expressed their anger by burning tyres, shutting down shops and organising protests. They accused the hospitals, the state and the United Nations Relief and Works Agency for his death.

Milad Salameh, a Palestinian activist in the camp, said that the family could not afford to pay and that the final hospital delayed the treatment because they were waiting for the payment from UNRWA.

“People were informed that the boy died because he was not covered by UNRWA,” he said.

It is not clear how this information reached the camp and whether it was accurate, but it did succeed in enraging the locals against UNRWA which pays for the health care of over five million Palestinian refugees across Lebanon, Syria and Jordan.

UNRWA said that they did everything they could to save the child.

“There were no beds available until early afternoon of the 17th of December when UNRWA succeeded in finding him a bed at the Tripoli Governmental hospital. He unfortunately passed away on the night of the 17th,” UNRWA’s statement said.

To emphasise the agency intended to pay the bills, it added, “UNRWA did not spare any effort and did not refrain from providing any medical or financial coverage but the problem was due to unavailability of specialised hospital beds.”

Salameh found it hard to believe UNRWA. He alluded to a deepening mistrust of the Palestinians towards the agency and said that people have been complaining about “shrinking services” of UNRWA since the United States pulled back the funding.

While the agency has spoken openly about the pressure they have been under, it has maintained that none of the programs have been stopped and the gap in funding has made up with funds from the EU and the Gulf nations.

Salameh later said that Wahbah’s death aggravated the people in the camp as he was not the first child to die because of lack of health care. He said that at least two other children died over the last 18 months under similar circumstances. The Palestinian activists are now demanding a hospital be set up in the Nahr al - Bared camp, home to 40,000 refugees, to avoid any more such deaths.

“We are humans too,” Salameh said. “A child with no religion or political affiliation should have the minimum right of medical care.”

Who is responsible for the child’s death?

According to the state-run National News Agency in Lebanon, caretaker Health Minister Ghassan Hasbani called Wahbah’s case “very advanced” implying he could not have been saved. None of the hospitals accused of negligence by the family have commented. The broader message being sent out is - there were simply not enough beds. On its part, the UNRWA sent condolences to the grieving and reiterated its commitment to the community.

With everyone hiding behind excuses, the question still remains: Was it a lack of a basic health care or of money or collective apathy which led to Wahbah’s untimely death? Or was he just too ill? There is no clear answer and sadly, there may never be one.

Wahbah’s mother insists her boy had a chance.

“If he was admitted to a hospital the first day, he would have been alive in my lap,” she said. 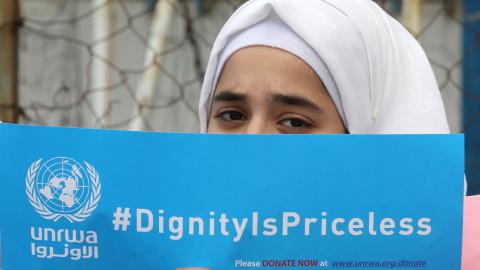 UNRWA donors to meet in Rome as funding crisis looms

Everything you need to know about the mutated, possibly airborne Covid-19

1
A Kyrgyz videogame begins to show up the violence of “bride kidnappings”
2
Alacati post lockdown: local tourists start making their way back
3
Everything you need to know about the mutated, possibly airborne Covid-19
4
Saudi Crown Prince prepares new charges against Mohammed bin Nayef
5
Delivered in style: “Mango in a Lambo”