Attempts to kick Palestinians off their land during a pandemic and in the middle of the Muslim month of Ramadan has given residents additional impetus to fight Israeli occupation.

Palestinians in occupied East Jerusalem are an uncomfortable reminder that Israel is an occupying force.

The attempt by Israeli forces, working alongside Jewish settlers, to forcefully evict indigenous Palestinians from the Sheikh Jarrah neighbourhood is part of a systematic attempt by Israel to alter the demographic makeup of East Jerusalem, one house at a time - and in violation of international law.

A recent video of a Jewish settler with a New York accent telling a Palestinian family that "If I don't steal it, someone else is going to steal it", referring to an illegally occupied house in Sheikh Jarrah, underscored the ugly truth of Israeli occupation: theft.

Israel's long march of Judaising East Jerusalem, far from being a recent phenomenon, goes back decades.

How did it start?

Israel illegally occupied much of today's Palestinian territories after the 1976 war, including East Jerusalem.

In defiance of international law, Israel has spent innumerable resources and political capital to make the city the "eternal, undivided" capital of the Jewish people and Israel.

A Jewish capital has, in the mind of Israel's leaders, little space for the Islamic, Palestinian and Christian heritage of the city that goes back thousands of years.

After occupying the city, Israel quickly extended its laws over the city and its overwhelmingly Palestinian residents, who were now detached from the rest of the territories.

No country in the world accepted Israeli claims over East Jerusalem until that is, US President Donald Trump changed decades of US policy and moved the country's embassy from Tel Aviv and recognised the city as the undivided capital of the Jewish people.

But underpinning Israeli claims to the city are "facts on the ground", otherwise known as illegal Israeli settlements.

In 1968, Teddy Kollek, the mayor of Jerusalem, including the occupied eastern part of the city early on laid out a vision that consecutive administrations would embed and deepen.

In Kollek's words, the aim should be "to ensure that all of Jerusalem remains forever a part of Israel." And the way to do that? Keller's prescription was simple: "we have to make it an integral part of our country, and we need Jewish inhabitants to do that."

"Jerusalem, complete and united, is the capital of Israel", declared the legislation, which contravenes basic international norms.

The move was underpinned by Israel declaring that Jerusalem housed the country's highest institutions, including the president's seat, its parliament, government and Supreme Court.

But the city was still not demographically secured for Israel.

Jewish settlements began to emerge in or around majority Palestinian neigbourhoods. Roads, walls and inadequate investment in Palestinian neighbourhoods were used to make the lives of the indigenous harder.

In this process, Israel managed to change the demographic map of the city. More than 80 percent of East Jerusalem is under Israeli control. Palestinians often find it impossible to gain permission to build new houses or extensions to their current homes.

In the middle of Palestinian neighbourhoods in East Jerusalem, more than 2,000 illegal settlers have been parachuted over the years, with the protection of the Israeli army. It is part of an attempt to sustain demographic pressure on Palestinians.

Alongside these actions starting in 2002, Israel began to build a wall that would separate Israel and the Palestinian occupied lands. But with the added caveat that Israel would get to expand its borders.

The wall snakes around East Jerusalem, including illegal Jewish neighbourhoods and leaving out the majority of Palestinian neighbourhoods. More than 140,000 Palestinians are left out of the city's boundaries, while illegal settlements have been included to ensure Jewish supremacy over the city.

Israeli attempts to further displace Palestinians in Sheikh Jarrah during an ongoing pandemic in the Muslim Holy Month of Ramadan has ignited a pent up anger resulting in thousands of Palestinians protesting for their rights. 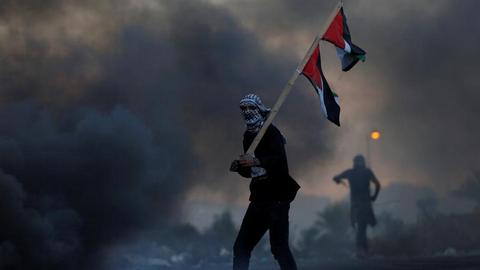