Will Biden keep his promise to shut down Guantanamo?

As US President-elect Joe Biden is slated to take office in under a week, he will become the fourth incumbent overseeing the infamous American military detention centre at Guantanamo Bay. On the nineteenth anniversary of its opening, international organisations and human rights groups called on him to deliver on his promise nearly twelve years ago that his administration would shut it down.

“Guantanamo is a place of arbitrariness and abuse, a site where torture and ill-treatment was rampant and remains institutionalised, where the rule of law is effectively suspended, and where justice is denied,” a group of UN experts said in a statement.

A new report from Amnesty International this week also highlights the ongoing human rights violations committed by the US at Guantanamo in the name of the so-called “War on Terror”, and calls on renewed attention and commitment to shutting it down. Although Guantanamo has largely disappeared from headlines since the Obama administration failed to shut it down, forty people remain in the notorious facilities in Cuba, where prisoners continue to be ill-treated with impunity. A UN expert said that torture persisted in Guantanamo Bay as recently as 2017, even though Washington had banned what it calls “enhanced interrogation techniques”.

Many were held based on inaccurate evidence, misinformation, or in cases of mistaken identity, and were not, and are not, allowed legal recourse. Those who are charged are tried through the controversial “military commissions”, a judicial system that was created at Guantanamo but falls short of the US or international legal standards.  Moreover, most prisoners are held without charge and not cleared for release, and even those who are cleared for release remain imprisoned.

“These are detentions that are inescapably bound up with multiple layers of unlawful government conduct over the years – secret transfers, incommunicado interrogations, forced feeding of hunger strikers, torture, enforced disappearance, and a complete lack of due process,” said Daphne Eviatar of Amnesty in a press release.

Commonly referred to as a “legal black hole”, Guantanamo Bay was deliberately designed by US authorities to be outside the purview of US law. Almost all of the nearly 800 men and children who have been detained there have been held in violation of international humanitarian law. Over the course of almost twenty years, nine have died, including six from suspected suicide.

Biden has yet to reveal his plans regarding Guantanamo. Transition spokesman Ned Price has said that Biden supports closing it, but wouldn’t discuss details before assuming office.

Though some prisoners look at a Biden presidency with the hope of possible release many observers remain doubtful regarding the closure of the detention centre.

The Biden administration is overwhelmingly expected to be a rehash of the Obama period, especially with regards to foreign policy.

For instance, Biden has yet to comment on his policy on drone warfare, one of the most brutal US programs that Obama expanded during his tenure. Though he has vowed to end “forever wars” in Afghanistan and the Middle East, his appointment of Brett McGurk, who views the world through the “war on terror paradigm” to the Middle East role in the National Security Council could mean a policy of using “terror to fight terror”, according to pundits. 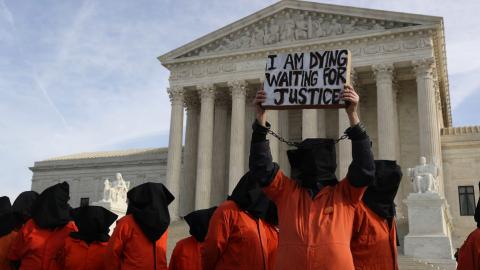