US President Donald Trump has declared his decision to recognise Jerusalem as Israel's capital, despite all UN resolutions, international agreements and worldwide objections. Here are five things to know about the decision:

1- Why did Trump decide to recognise Jerusalem as Israel’s capital?

In 2016, US President Donald Trump promised during his presidential campaign that he would recognise Jerusalem as the capital of Israel and relocate the US embassy to Jerusalem from Tel Aviv—a promise that every US President starting from Bill Clinton made, but didn't fulfill.

Trump had said he would move the US embassy “fairly quickly” after taking office. On Wednesday, nearly a year later, he formally announced the US’s recognition of Jerusalem as Israel's capital, becoming the first American President to do so.

According to some American media, Trump’s move wasn’t necessarily about the location of the US embassy. Many say that it was rather a move intended to please domestic supporters, including his right-wing Evangelical base and the pro-Israel lobby.

Trump has faced trouble at home following allegations that his campaign colluded with Russia in the 2016 elections. An ongoing probe is still looking into this matter. On December 1, Trump’s former national security adviser Michael Flynn was charged for making false statement to the FBI about his interactions with Russian officials during the election campaign. Flynn pleaded guilty and agreed to co-operate with the special counsel investigating the administration.

Intelligence officials uncovered evidence of Flynn speaking to the Russian ambassador, leading him to resign in February.

2- Who supported the decision?

No one except Israel.

From US allies to leaders across the Middle East and the Muslim world—apart from in Israel itself—official reaction has been unanimous against the US decision. The move broke from decades of US policy towards the Israeli-Palestinian conflict.

Bringing longtime foes, Iran and Saudi Arabia, on the same side, world leaders quickly reacted to the decision.

Rejecting Trump’s speech on Jerusalem, Palestinian President Mahmoud Abbas said that Trump “destroyed the two-state solution” and abdicated the US' role as a peace mediator. The secretary general of the United Nations also reiterated concerns of undermining the peace process.

"I have consistently spoken out against any unilateral measures that would jeopardise the prospect of peace for Israelis and Palestinians," UN Secretary-General Antonio Guterres said.

Turkey’s President Recep Tayyip Erdogan has also harshly criticised Trump’s decision, saying it would throw the region into a "ring of fire." He had earlier warned the US that changing the status of Jerusalem would be a red line for Muslims.

Iran’s foreign ministry also slammed the decision in a statement saying that the move would inflame a new Intifada, while Saudi Arabia called Trump’s move “irresponsible and unjustified". But a former aide of Israeli Prime Minister Benjamin Netanyahu has said that Saudi Arabia "doesn't care" about the Palestinians as long it is able to secure Israel’s support against Iran.

The leaders of France, Britain and Germany also said they don't support the decision.

German Chancellor Angela Merkel said that Germany does not support the Trump administration's decision to recognise Jerusalem as Israel's capital, “because the status of Jerusalem is to be resolved in the framework of a two-state solution."

British Prime Minister Theresa May said, "We disagree with the US decision to move its embassy to Jerusalem and recognise Jerusalem as the Israeli capital before a final status agreement."

Worldwide protests are also expected in front of Israeli and Palestinian embassies after Friday prayers.

3- Can he open an embassy in an occupied territory despite UN prohibitions?

Trump has not specified where exactly the embassy will be moved to. Israel has occupied East Jerusalem since 1967, and effectively annexed it in 1980 amidst international condemnation. With Jordanian control of the holy sites in the Eastern part, Jerusalem has remained a divided city ever since. But Israeli control of East Jerusalem is not recognised internationally.

A UN Security Council resolution adopted that year called on all states to withdraw their diplomatic missions in Jerusalem:

UN Resolution 476, adopted June 30, 1980, reaffirmed the “overriding necessity for ending the prolonged occupation of Arab territories occupied by Israel since 1967” and stated that all measures which had altered the status of Jerusalem were “null and void” and had to be rescinded.

Later that year, UN Resolution 478, which was adopted on August 20, 1980, condemned in “the strongest terms” the enactment of Israeli law proclaiming a change in the status of Jerusalem. The resolution called on all states “that have established diplomatic missions” in Jerusalem to withdraw them from the city.

Even before the annexation, in 1971, the UNSC gathered to stop Israel’s moves on Jerusalem. Resolution 298 confirmed in “the clearest possible terms” that all actions taken by Israel to change the status of Jerusalem, such as land confiscation, were illegal.

4 - What does it mean for any possible peace process?

Trump’s decision, which effectively kills the two-state solution, is widely seen as sabotaging his own pledge to broker the peace process between Palestine and Israel. The US has been the main broker of the peace process since 1967.

Trump, who also promised to be Israel’s "best friend" when he was running for the presidency, decided in January to assign his son-in-law and senior adviser Jared Kushner to lead US efforts in restarting the Israeli-Palestinian peace talks.

The US’ recognition of Jerusalem as the Israeli capital follows Hamas’s reconciliation deal with rival Fatah in October. Hamas took a harsher stance on any peace settlements with Israel, and has been fighting against Israeli forces in the Gaza Strip, which Hamas had controlled since 2006.

Fatah, the largest political party of the Palestinian Liberation Organisation (PLO), has been defending a two-state-solution and peace talks with Israel. The reconciliation between the rival Palestinian factions had become a hope towards the peace process and a two-state solution.

Regardless of being Israel's strongest ally, the US had spoken out against illegal Israeli settlement activity in Palestinian territory.

Fatah has also objected to the US' decision to recognise Jerusalem as Israel's capital.

Senior Hamas official and deposed Palestinian prime minister Ismail Haniya has called for a new "Intifada", or uprising, against the Israeli state. In his speech in Gaza on Thursday, Haniya said that Trump’s move has killed any Israeli-Palestinian peace process.

5- Why does Jerusalem matter?

Jerusalem is home to sacred relics, historical figures, and holy sites, shared by the world’s three Abrahamic religions—Islam, Judaism, and Christianity. A compound, which is the holiest site for Judaism and the third holiest site for Islam, is located in the eastern part of Jerusalem. The compound is called the Haram al Sharif, or Noble Sanctuary, by Muslims—which houses the Aqsa mosque—and the Temple Mount by Jews.

The territory has been a source of conflict between Israel and Palestine, and the city has also seen centuries of struggle for control by Muslims, Jews and Christians.

The eastern part of the city fell under Egyptian and Jordanian control, along with the West Bank and Gaza, during the first Arab-Israeli war in 1948, when Israel captured almost 80 percent of Palestine.

Israel occupied the city during the Six-Day war in 1967, calling it Israel's “eternal, undivided capital.” It undermined the citizenship of Palestinians, who were given “permanent residents” status instead, which means that Israel can revoke their identification at any time.

The Palestinian uprising against Israel in 2000, or the second Intifada, broke out in Jerusalem and spread across Palestine. And the latest unrest was sparked in the city in July, when Israel began using metal detectors and installed surveillance cameras at the Aqsa compound. It wasn't the first time Muslims have been prevented from praying at the Harem al Sharif by Israel, sparking unrest across the city. 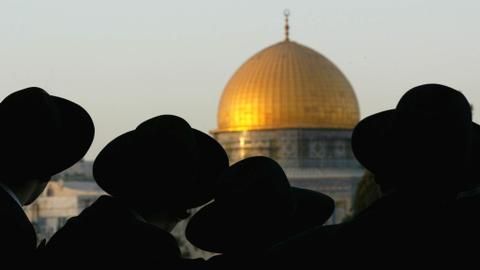 An actual US embassy in Jerusalem is not that important, the decision is