Academics call for radical changes to global governance for safeguarding of international security and peace.

The United Nations Security Council (UNSC) is in urgent need of reform in order to safeguard international security and peace, provide solutions to global conflicts and save lives, a panel of academics and scholars said in discussions held in London.

Organised by Türkiye’s Communications Directorate and titled “United Nations Security Council Reform: A New Approach to Reconstructing the International Order,” the conference heard speeches from a variety of senior scholars and academics well-versed in international relations who all see the need for the reform of global governance.

The initiative will be broadcasted to audiences across the world with similar events being held in France, the US, Japan and South Korea.

The aim of the initiative is to raise awareness and to foster an atmosphere of critical thinking and solution-driven ideas that would help reform the UN in a realistic and practical way.

"The UN, with this structure, is not on the side of the weak, the victim, or the righteous but rather on the side of its five powerful permanent members. With its current structure, the UN is unable to speak out against the oppressor.

The main reason for this is the problems in the institutional structure of the organisation. It is a fact that Asian, Latin American and African countries are flagrantly excluded from representation in the UN Security Council,” said Communications Director Fahrettin Altun.

“Our proposal for a solution, on the other hand, is to adopt the perspective expressed in the phrase 'The world is bigger than five,' which focuses on restructuring the UN Security Council. Peace and stability require a fairer, more resilient global UN system that reflects justice, multiculturalism and mutual respect,” he added.

The initiative to reform the UNSC as well as the wider UN organisation began 10 years ago when the Turkish government expressed concerns over the lack of fairness and equality in the Security Council and especially surrounding the special status of its five permanent members (P5) - the United States, the UK, Russia, China and France - who have the power of veto when it comes to votes in the UNSC and the discussions to be held in the General Assembly.

Although other nations within the UN can be nominated as non-permanent members of the UNSC, as Türkiye did four times between 1951 and 2010, they have limited power and influence in affecting real change, as all outcomes are decided by the P5, and as such, an atmosphere of deadlock has existed within the UNSC which has largely prevented the resolution of global conflicts and crises since its founding in 1945.

The panelists oftentimes quoted a famous saying on the issue by Turkish President Recep Tayyip Erdogan, who said “The world is bigger than five” - a reference to the five permanent members of the UNSC.

They called for a major rethink of how to conduct global governance through the UN and an alternative approach that would safeguard the interests of the international community, not individual states.

In light of these perceived inequalities and deadlock, it has been argued that the UNSC exists to safeguard not the interests of the international community and global security but the interests of powerful individual states who maintain sway and influence due to their highly advanced economies and their possession of nuclear arsenals.

The hypocrisy and double standards of the UN were also raised, with many comparing the hyped up international reaction to Russia’s attack on Ukraine to the silence over and neglect of other non-European conflicts and atrocities such as the indiscriminate attacks by Israeli forces on the occupied Gaza Strip. The panelists put this down to the imbalance of power in the UNSC.

Türkiye has been at the forefront in calling for such changes. These include introducing term limits to the membership of the P5 in the UNSC, as experienced by non-permanent members, and removing the power of the veto which has prevented the UN from carrying out much needed assistance throughout the world. 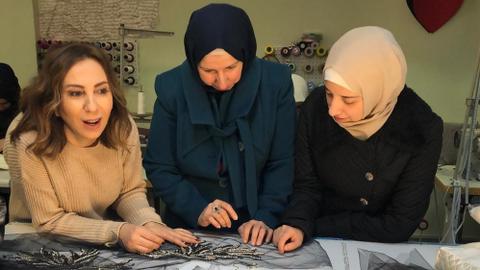