Biden on Saturday said the killings of Armenians constituted "genocide," a historic declaration that is set to strain frayed ties between the two NATO allies.

"We have nothing to learn from anybody on our own past. Political opportunism is the greatest betrayal to peace and justice," Cavusoglu said on Twitter.

"We entirely reject this statement based solely on populism."

“Words cannot change or rewrite history. Turkey has nothing to learn from anybody about its own past,” Mevlut Cavusoglu wrote in English on Twitter on Saturday.

We have nothing to learn from anybody on our own past. Political opportunism is the greatest betrayal to peace and justice.

We entirely reject this statement based solely on populism.#1915Events

Saying that political opportunism is the greatest betrayal of peace and justice, he stressed that Turkey totally rejects Biden’s statement.

Shortly before Biden's statement, Turkish President Recep Tayyip Erdogan said the debate over the Armenian claims, which have been politicised by third parties and turned into tools of interference, has helped no one.

"We cannot allow the centuries-old culture of coexistence of Turks and Armenians to be forgotten," Erdogan said in a letter to Sahak Mashalian, head of the Armenian Patriarchate of Turkey.

Turkey's foreign ministry said Biden's statement lacks any scholarly or legal basis and is not supported by the evidence.

"We reject and denounce in the strongest terms the statement of the President of the US regarding the events of 1915 made under the pressure of radical Armenian circles and anti-Turkey groups on 24 April," the ministry said in a statement.

The ministry added that none of the conditions required for the use of the term "genocide" – strictly defined in international law – are met by the events of 1915.

"The nature of the events of 1915 does not change according to the current political motives of politicians or domestic political considerations. Such an attitude serves only a vulgar distortion of history," stressed the statement.

The ministry said the statement by Biden, who is neither legally nor morally authorised to judge historical events, has no value, it said.

US attitude on 1915 events unrelated to historical facts

The head of the Turkish parliament’s Foreign Affairs Committee said on Saturday that the US attitude on the events is unrelated to historical facts.

Biden’s assessment of the events caused serious disappointment due to the way the US lost its moderate approach in line with the proper understanding of a state, Akif Cagatay Kilic said in a statement.

Kilic said the international Armenian lobby use the date April 24 as propaganda fodder contrary to the law and truth, and Armenians and the Armenian diaspora expended huge efforts and resources to get the so-called “genocide” allegations accepted by the international public.

“It is a known fact that the Armenian lobby, which has significant electoral power in the US, has been working for decades to distort the historical facts and aiming to achieve political gains by the US administration, and has concentrated its efforts in this direction especially on the Biden camp since before the 2020 presidential elections,” he said.

‘Issue should be left to historians’

Kilic added that using a subject that should be left to historians as political fodder harms Armenia more than Turkey.

“These unrealistic claims, which have become the reason for the existence of the Armenian diaspora, do not benefit the people of Armenia, who are overwhelmed by internal and external problems in the South Caucasus, and who cannot cope with economic difficulties and grow poorer every day,” he added.

Citing the historical facts from 1915, Kilic said thousands of Turkish citizens were brutally massacred by Armenian gangs, as proven by documents in the archives of many different states.

He concluded that Turkey and the history of the Turkish nation are spotless and cannot be stained by untrue statements or baseless claims.

Earlier Saturday, Biden called the events of 1915 a “genocide,” breaking American presidents’ long-held tradition of refraining from using the term.

Turkey's vice president said on Saturday that the statement shows the distortion of history for the sake of political calculations.

Biden's statement, based on unfounded claims made by Armenians and ignoring the suffering of Turks murdered by Armenian mobs in 1915, has no value for either the Turkish nation or history, Fuat Oktay said on Twitter.

Echoing statements by the nation’s president, he reiterated that Turkey's archives from the period are always open to those who want to see the facts.

Look at 'your own past'

Turkish Presidential Spokesman Ibrahim Kalin said the United States should look to its own past in response to Biden's move.

"We strongly condemn and reject the US President's remarks which only repeat the accusations of those whose sole agenda is enmity towards our country," Kalin said on Twitter.

"We advise the US President to look at (his country's) own past and present."

We strongly reject and condemn @POTUS’s unfounded statement on the events of 1915. Politicizing history is never a rational and moral act. It is a pity that the US has succumbed to an interest group at the expense of distorting historical facts and alienating a NATO ally.

Successive US presidents have refrained from calling the deaths of Armenians “genocide,” but former President Barack Obama adopted the Armenian phrase “Meds Yeghern” or “Great Crime” to describe the tragedy, a practice repeated by Trump.

Armenian terror organisations have killed 31 Turkish diplomats and family members since the 1970s.

According to data compiled by Anadolu Agency, a total of 77 people – 58 of them Turkish citizens, including 31 diplomats and members of their family – lost their lives in attacks carried out by these terror organisations.

The vast majority of the attacks were carried out by the Armenian Secret Army for the Liberation of Armenia (ASALA) and the Justice Commandos of the Armenian Genocide (JCAG).

ASALA, founded in 1975, was the first Armenian terrorist organisation to wage war against Turkey.

It not only targeted Turkey but also other countries and became infamous for a bomb attack on the Beirut office of the World Council of Churches in 1975.

The JCAG was formed in 1975 in Beirut. However, it is nationalistic, not Marxist-Leninist like ASALA.

Claiming that it only received support from the Armenia diaspora rather than foreign partners, JCAG only targeted Turkey because it believed that attacking other countries would damage the so-called "Armenian struggle."

It initially gained notoriety by claiming responsibility with ASALA for an attack on Turkey’s Ambassador in Vienna Danis Tunaligil on October 22, 1975.

READ MORE: Ankara condemns release of Turkish diplomat's assassin in the US 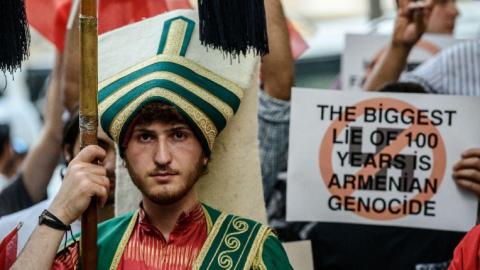