Jury hears closing arguments over whether the three white men charged with murdering Ahmaud Arbery had any right to chase and shoot unarmed Black man in their mostly white Georgia neighbourhood.

Attorneys have made a final push to persuade the jury in the killing of Ahmaud Arbery, with the prosecution saying that three white men chased him solely "because he was a Black man running down the street" and defence attorneys repeatedly blaming Arbery for his own death.

In closing arguments on Monday, prosecutor Linda Dunikoski told the jury the defendants had no evidence that Arbery committed crimes but instead acted on assumptions based on neighbourhood gossip and speculative social media posts.

"They made the decision to attack Ahmaud Arbery in their driveways because he was a Black man running down the street," Dunikoski said.

She added: "They shot and killed him. Not because he was a threat to them but because he wouldn't stop and talk to them."

Defence blames Arbery for his death

A defence attorney for the man who fired the fatal gunshots said the 25-year-old Arbery was killed as he violently resisted a legal effort to detain him to answer questions about burglaries in a neighbourhood just outside the port city of Brunswick, Georgia.

"It is absolutely, horrifically tragic that this has happened," attorney Jason Sheffield said.

"This is where the law is intertwined with heartache and tragedy. You are allowed to defend yourself."

The attorneys made their appeals to the disproportionately white jury after 10 days of testimony that concluded last week.

Closing arguments were to resume on Tuesday. Prosecutors will get the final word because they carry the burden of proving their case beyond a reasonable doubt.

Though prosecutors did not argue that racism motivated the killing, federal authorities have charged all three men with hate crimes, alleging that they chased and killed Arbery because he was Black.

Father and son Greg and Travis McMichael grabbed guns and pursued Arbery in a pickup truck after spotting him running through their subdivision on February 23, 2020.

A neighbour, William "Roddie" Bryan, joined the chase and recorded the video of Travis McMichael opening fire as Arbery threw punches and grabbed for his shotgun.

No one was charged in the killing until Bryan's video leaked and the Georgia Bureau of Investigation took over the case from local police.
All three men are charged with murder and other offences. 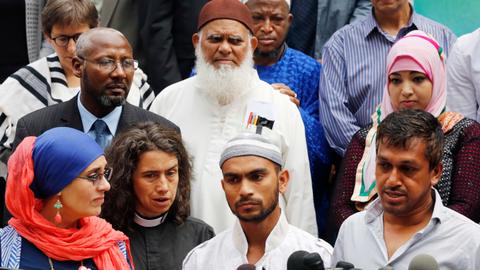