A time-controlled device on a motorbike killed at least 3 people and left dozens others wounded in the country's second largest city.

A powerful bomb went off in a crowded bazaar in Pakistan's second largest city of Lahore, killing three people and wounding over 20 others.

Abid Khan, a senior police official, said the dead and wounded had been transported to a nearby hospital after Thursday’s attack, where some were listed in critical condition.

Officers are still trying to determine what kind of device was used for the attack.

"Initial investigations show that it was a time-controlled device on a motorbike which was the cause of the blast," Rana said.

According to witnesses, the blast was so powerful that it damaged several shops near the eastern city's famous Anarkali bazar.

READ MORE: The limits of Pakistan's strategic pivot to geoeconomics

No one immediately claimed responsibility for the bombing, but it comes days after the Pakistani Taliban shot dead three police officers in separate attacks in the capital, Islamabad, as well as the northwest region bordering Afghanistan.

The Pakistani Taliban, who have been emboldened since the Afghan Taliban seized power across the border in Afghanistan, warned this week they could carry out more attacks in the near future.

Prime Minister Imran Khan condemned the bombing in a statement, urging local authorities to provide the best possible medical facilities to those who were wounded in the blast. 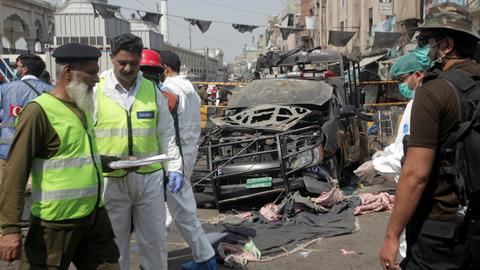