The head of Indonesia's National Transportation Safety Committee confirmed finding one of the back boxes from the the Lion Air jet three days after it crashed into the Java sea with 189 people on board.

One black box from a crashed Lion Air jet has been recovered, the head of Indonesia's National Transportation Safety Committee said Thursday, which could be critical to establishing why the brand new plane fell out of the sky.

"We found one of the black boxes," Soerjanto Tjahjono told AFP.

"We don't know yet whether it's the FDR (flight data recorder) or CVR (cockpit voice recorder)."

Indonesia TV showed divers on Thursday handing over what they said was a black box from the Lion Air jet that crashed into the sea on Monday with 189 aboard.

TRT World spoke to aviation safety expert Ron Bartsch for his take on what could have brought down the plane.

The diver, identified as Hendra, was reported as saying they'd dug the black box, orange in color and intact, out of mud and debris. He did not specify if the item was the flight data recorder or the cockpit voice recorder.

Ground staff lost contact with flight JT610 of budget airline Lion Air 13 minutes after the Boeing 737 MAX 8 aircraft took off early on Monday from the airport in Jakarta, the capital, on its way to the tin-mining town of Pangkal Pinang

Indonesia deployed divers on Tuesday to search for the cockpit recorders with "pinger locators" and find out why an almost-new plane went down in the sea minutes after take-off.

On Wednesday, Indonesia's military chief said he believed the plane had been located, and a transport safety official said divers would be sent to confirm a "ping" signal picked up by a search and rescue team late on Tuesday.

"We strongly believe that we have found a part of the fuselage of JT610," Hadi Tjahjanto told broadcaster TV One, adding that the search team had the location coordinates but now had to confirm it was the plane.

Indonesia has deployed "pinger locators" in the hunt for the plane's blackboxes, as the cockpit voice recorder and flight data recorder are known, at the crash site.

"Yesterday afternoon, the team had heard a 'ping' sound in a location at 35 metres depth," Haryo Satmiko, the deputy chief of the national transport safety panel, told Reuters, referring to a depth of 115 feet.

"This morning, at 5am, the team has gone back to dive at the location." 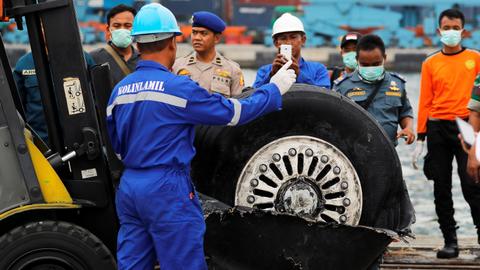