Mindanao, Philippines - At the height of the Covid lockdown in the Philippines, Jakob Amatong, a lanky teenager, was only busy creating online spoofs.

A 31-second clip he posted on Facebook, lampooning a herbal medication even turned viral, getting over half-a-million views and turning him into a recognisable influencer in his hometown.

Since he declared his support for presidential candidate Leni Robredo, however, the social media environment has become more hostile to him.

He is still occupied with producing made-for-Tiktok videos and knocking on voters’ doors in support of his candidate.

But ahead of the May 9 polls, he has also found himself fending off online abuse and debunking disinformation mostly directed at the incumbent vice president.

Amatong says his experience on the campaign trail made him more aware of his role as a first-time voter in determining the country’s future.

It has also nudged him into confronting a tragic past attached to his name, amid the possibility of victory of Ferdinand Marcos Jr, heir and namesake of the country’s former dictator, who is leading the race to become the country’s 17th president.

“I’m not just dedicating my vote to myself, but also to other young people. At the end of the day, our whole nation will benefit if we make the right choice,” he tells TRT World, adding that the country cannot afford to repeat the Marcos history.

Political observers and scholars worry though that the barrage of disinformation circulating on social media could hand the election to Marcos Jr, barely 36 years after his family was banished from Manila following a popular revolution in 1986.

On Monday, Filipinos “will find out if fake news will have elected the next president of the Republic of the Philippines,” Joel Butuyan, president of the Manila-based human rights advocacy group, said during an online forum on disinformation and cyberattacks attended by TRT World.

“We will know if we have a president who will owe his mandate not to the sovereign free will of the people, but to the manipulative and deceptive powers of fake news.”

A recent study by the University of the Philippines (UP) concluded in February that Marcos has been the biggest beneficiary of glowing but inaccurate information on social media, while his rival Robredo is the “biggest victim” of disinformation.

Now activists are warning that once back in power, Marcos Jr and his family could also attempt to rewrite, if not erase, the brutal and corrupt past of his father, while covering up the remaining corruption charges still hounding them.

READ MORE: Is the Philippines on the verge of another Marcos presidency?

It was at the height of Ferdinand Marcos Sr’s presidency when Amatong’s grandfather, Jacobo Amatong, a city council member and journalist in the southern city of Dipolog, was shot dead alongside his friend and human rights lawyer, Zorro Aguilar.

The two had been investigating alleged summary executions by the Marcos’ military when they were attacked in September 1984.

Aguilar was killed on the spot. Amatong managed to identify three times their assailants as belonging to the “army”.

He died in the hospital hours later. A witness, who drove the getaway vehicle, also identified the two killers as members of the military.

He was killed a year later by unidentified gunmen.

Jakob Amatong’s father was only six when the elder Amatong was killed. So even the second-hand recollection of his grandfather has been clouded by fading memories.

His aunt was only three years old at that time. His grandmother rarely talks about her heartbreak, he said.

The killings were never solved. Their names were added to Amnesty International’s list of 3,200 people killed during Marcos Sr’s presidency.

An estimated 70,000 others were detained and 34,000 tortured during the same period.

In his 21 years in power, Marcos Sr and his charismatic wife, Imelda, were also accused of overseeing a “conjugal dictatorship” that plundered the country of at least US$10-billion, while plunging the country into poverty.

Over $3 billion have already been recovered by the government, another $2.5 billion are under litigation, while the rest remain untraceable.

The Marcos family has repeatedly denied the allegations of human rights abuses and corruption.

This despite several convictions, including a 2018 anti-graft court ruling that found Imelda guilty of funnelling  US$200 million to their secret bank accounts in Switzerland.

She was sentenced to prison but remains free under the watch of Marcos ally, President Rodrigo Duterte.

Duterte’s daughter, Sara, is Marcos Jr’s running mate, although they are elected separately.

Despite overwhelming documentary evidence and public records of corruption, supporters of Marcos Jr’s presidential bid are also in denial about their candidate’s history of corruption, saying he and his family are victims of “conspiracy” and distortions by the media.

Kenneth Laranjo, 18 years old and a first-time voter, says he is voting for Marcos Jr.

“I’m basing my decision to vote for Marcos on the merits of his father’s achievements,” he tells TRT World, before falsely adding that the allegations against the Marcoses have never been proven in court. He mostly relies on Facebook and Google for information.

“Our government was not rich, so how come they are saying that the Marcoses managed to steal billions of dollars from our coffers?” he asks with certainty in his voice.

Beth Rafanan, a 38-year-old businesswoman, also says that “fabricated” information and the involvement of the US are to blame for the removal of Marcos and his family.

“The US never really wanted the Marcoses,” she tells TRT World, contradicting public information showing that the former Philippine president and Imelda were long-time personal friends of then-US President Ronald Reagan and his wife, Nancy.

The US also extended refuge to the Marcoses when their personal security was in peril following their ouster.

Lawyer Roldan Dalman, a former provincial governor from Mindanao and a UP-trained lawyer, says that incorrect information like those proliferating on social media are harmful to the electoral process.

Disinformation “is not contributing to a very credible election”, he tells TRT World.

“It looks like there are really efforts to poison the minds of people. But I think that our people are intelligent enough to be able to discern what is disinformation, and what is factual.”

Sifting through the flood of information on social media and recognising facts from “fake news,” however, may be easier said than done.

On Tuesday, the Filipino-American group US Filipinos for Good Governance (USFGG) revealed “rampant disinformation clearly favours” Marcos Jr, adding that hundreds of fake accounts are engaged in “coordinated” and “sustained malicious attacks” against his rival, Robredo.

It also added that the questionable Facebook accounts and pages have been in operation as early as 2016, employing “troll armies” to influence the outcome of the polls.

“Having the presidency decided based on lies that rewrite history and hide the fact that much of this troll activity is state-sponsored would be a tragedy,” Eric Lachica, a long-time Filipino leader based in Washington DC, said in a virtual press conference launching the website, TrollExposer.com.

Marcos Jr has vehemently denied that he is employing trolls to advance his campaign, declaring in a TV interview, “We have no trolls.”

When he exhausted his appeal at the Supreme Court, he still refused to recognise Robredo as the winner, while his supporters continued to lob insults and question her legitimacy.

Ahead of the election on Monday, the USFGG is demanding that Facebook immediately take down the questionable accounts and posts.

“We hope it is not too late to detoxify the minds and hearts of our people,” Lachica of USFGG said.

Fighting trolls and troll-like behaviours could be daunting at times, so young people are also learning to choose their battles.

“I feel guilty that I’m unable to refute all the inaccuracies that people post online,” Jakob Amatong confesses.

“I try to engage them if I sense that they’re open-minded. I even ask them if they are willing to listen to my point of view. But if they sound antagonistic or rude from the start, then I don’t waste my time responding anymore,” he adds.

In the course of the campaign, Amatong had the chance to travel to the Philippine capital to attend one of the earlier Robredo rallies that attracted more than 130,000 people.

It was one of those “goosebump” moments that assured him that he picked the right candidate, and inspired him to campaign harder alongside thousands of youth volunteers across the country, he says.

But it was only the next day during a visit to Manila’s martial law memorial that he let his emotions out.

He was still a child the last time he visited the wall of remembrance dedicated to those who died during the Marcos regime.

So he said a silent prayer as he stood near one of the names engraved in the marble stone: Amatong, Jacobo. And his eyes started to fill up with tears.

Ted Regencia is an online journalist. He has covered US politics and foreign affairs in the Asia-Pacific region and the Middle East, particularly Iran. He is a graduate of Columbia Journalism School in New York. 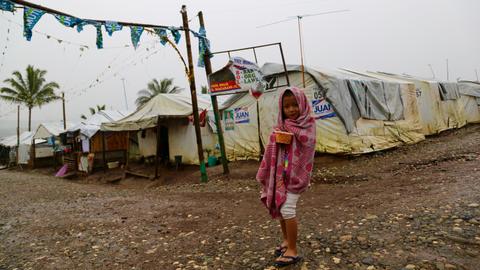 After Daesh, anger simmers in Marawi as Duterte builds new army base